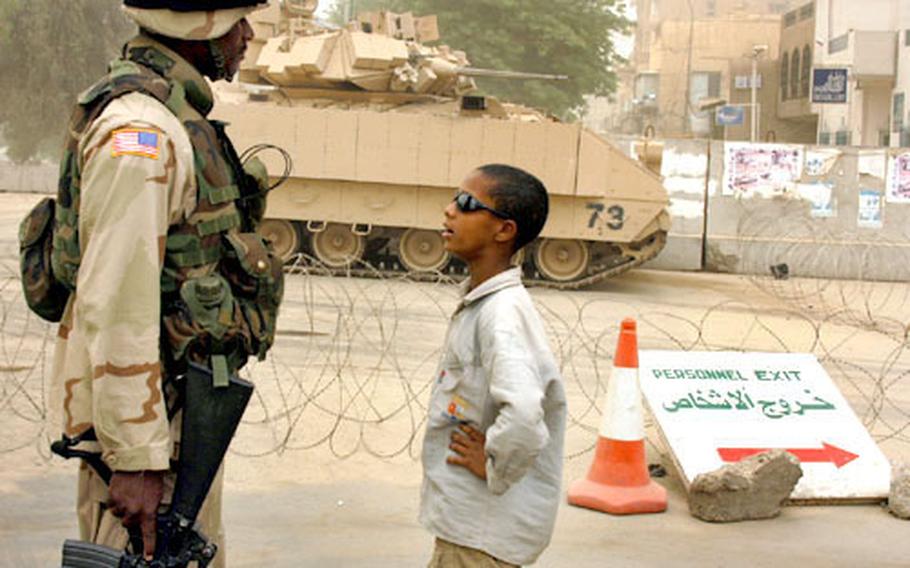 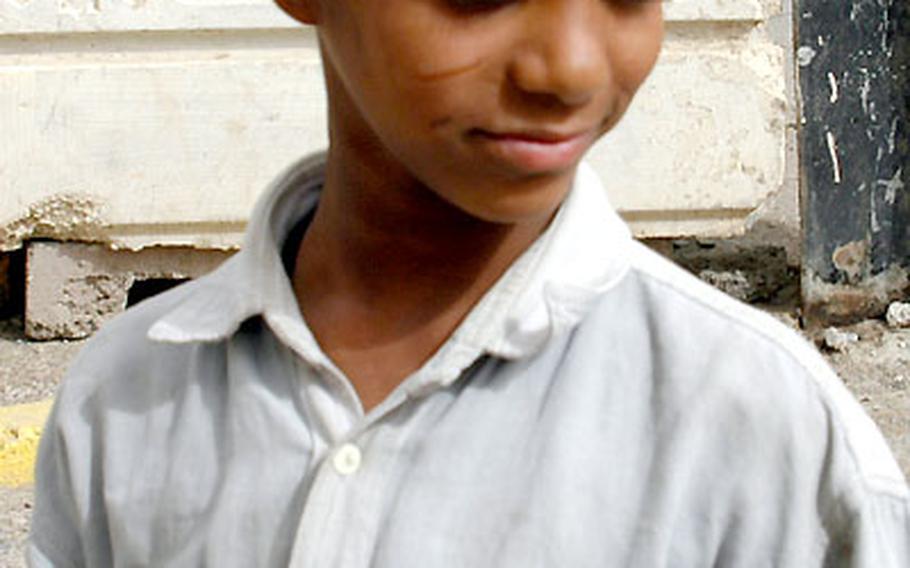 Soldiers have befriended Sayf, using him as a translator and errand boy. (Nancy Montgomery / S&S)

BAGHDAD &#8212; For the past year, the center of one boy&#8217;s universe has been a dusty, razor-wired military checkpoint in Baghdad. He&#8217;s there every day, sprawled atop a concrete barrier, subsisting on endless cans of Pepsi and talking to nearly everyone in his best soul brother accent.

When he finally gets tired, usually after midnight, he curls up inside a concrete cubbyhole where he keeps a blanket, near a parked Bradley.

Sayf (pronounced &#8220;safe&#8221;) has attached himself to every U.S. military unit that has manned a checkpoint to the Palestine/Sheraton hotel complex, beginning with the Marines last spring.

Small, scruffy and appealing, Sayf doesn&#8217;t go to school or play with other children. He hangs out with soldiers.

As for the soldiers, they don&#8217;t just put up with Sayf; they miss him when he&#8217;s gone. He&#8217;s made himself useful, translating and running small errands, even advising on checkpoint etiquette.

There&#8217;s also undeniable affection between the soldiers and Sayf.

&#8220;Last night we were coming back from patrol and he came running down the street, high-fiving us,&#8221; said Spc. Kyron Regis.

He can&#8217;t read or write, but Sayf has learned simple English quickly. He said he went to school once but was expelled for fighting.

He seems most drawn to the black soldiers, and he tries to walk and talk like he thinks they do.

Hussain Mohammed, 15, who sells cigarettes and beer outside the hotel each day after school until 11 p.m., said Sayf has been working the area since he was a very small boy.

No adult has ever come to claim him.

Sayf has found more of a haven than many Iraqi street kids.

&#8220;We have no census, but probably there are thousands of them,&#8221; said Huda Raphael, an adviser to the Iraqi Ministry of Labor and Social Services. &#8220;Kids who hang around the Palestine or Sheraton are just the tip of the iceberg.&#8221;

Until the Iran-Iraq war, homeless children were rare, Raphael said. But the war left widows and poverty and more war throughout the 1990s worsened the situation. According to the United Nation&#8217;s children&#8217;s agency, UNICEF, the number of homeless children in Baghdad rose last year after the U.S. invasion began. Services for them are nearly nonexistent.

Sayf has told soldiers that he has brothers and sisters and a mother, and that she forbids him to come home unless he brings $50. Sayf does go somewhere sometimes, to bathe or sleep, and once he returned wearing a new outfit.

He also frequently picks up something new from the soldiers. His vocabulary of curse words, for instance, is said to be impressive.

But sometimes the soldiers sing to him. Staff Sgt. Michael Tucker taught him &#8220;Build Me Up Buttercup&#8221; recently. Tucker sang a verse, then Sayf repeated it, until they finished the song.

The soldiers often slip Sayf $5 or so but they said he prefers to earn money pushing carts or carrying foreigners&#8217; bags in his skinny little arms.

Lewis said he saw a picture of Sayf taken a year ago. His hair, now close-cropped, was long and curly, and he was cleaner.

Each rotation of soldiers stays about two weeks at the checkpoint, then they go on to a different duty. Sayf makes friends all over again. But it&#8217;s not as easy as it looks.

Sayf kept asking Lewis how long he&#8217;d be at the checkpoint.