Boxing clinic a winner in Bamberg 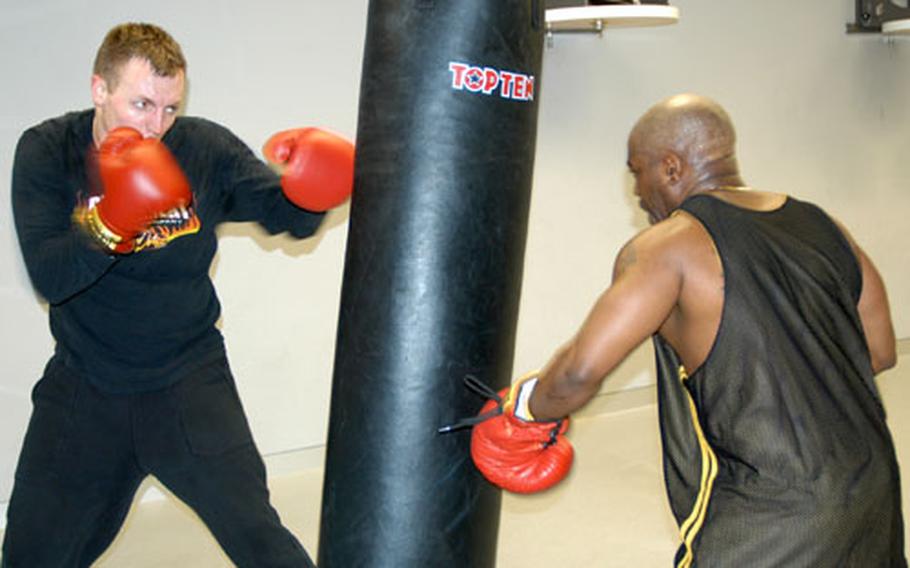 Sgt. Jan Ohrstrom, 1st Battalion, 33rd Field Artillery Regiment, left, works on the bag with another student during the one of the free boxing clinics held each Tuesday and Thursday at Warner Barracks in Bamberg, Germany. (Rick Emert / S&S)

Sgt. Jan Ohrstrom, 1st Battalion, 33rd Field Artillery Regiment, left, works on the bag with another student during the one of the free boxing clinics held each Tuesday and Thursday at Warner Barracks in Bamberg, Germany. (Rick Emert / S&S) 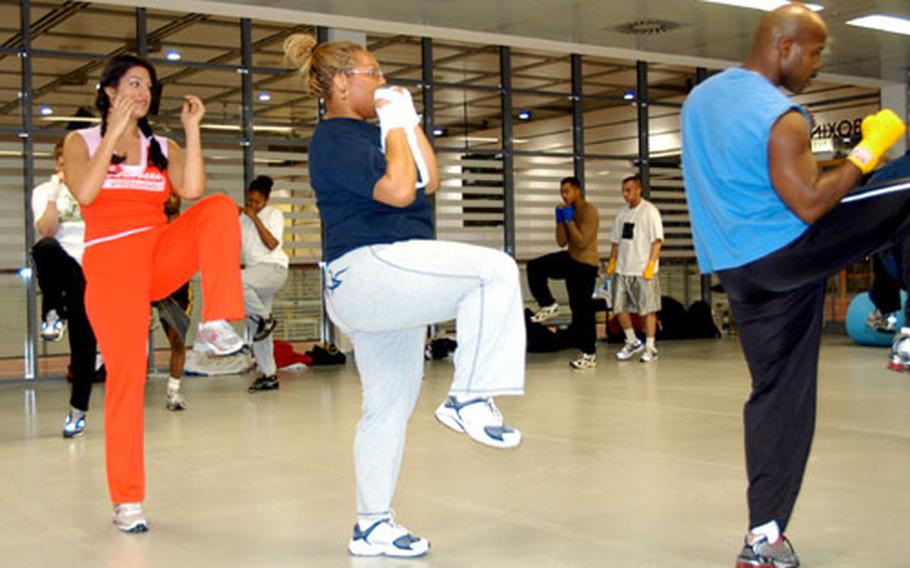 Students from the free boxing clinic at Warner Barracks warm up for a session. The groups does about 20 minutes of intense calisthenics before moving on to lessons on boxing techniques. (Rick Emert / S&S)

The twice-weekly clinic, which has 23 regular students looking to either get in shape or make it to the ring in a real bout, is run by Sgt. Maj. Orlando McMurry, who started the clinic in July.

McMurry, of Headquarters and Headquarters Company, 7th Corps Support Group, has competed at the U.S. Army Europe level and was on the All-Army boxing team at the beginning of his Army career.

At precisely 6 p.m. when the clinic begins each Tuesday and Thursday at the Freedom Fitness Facility, the students begin 20 minutes of intense calisthenics followed by more than an hour of working on basic and advanced boxing techniques, McMurry said.

More than half of the students are women. Many of the students want only the conditioning and exercise, but others are looking for the skills to compete or the ability to defend themselves, McMurry said.

&#8220;I took boxing classes when I was deployed to Iraq, but this is much more physically demanding,&#8221; said Jan Ohrstrom, 1st Battalion, 33rd Field Artillery Regiment. &#8220;My goal is to become a professional wrestler with World Wrestling Entertainment, and this would give me an edge with that.&#8221;

McMurry said he has a dozen students who could compete, and he is trying to drum up support for a boxing night at Warner Barracks. &#8220;To compete, you have to get some experience,&#8221; McMurry said. &#8220;A lot of them are really anxious to get in the ring and put the techniques they have learned to use.&#8221;

Of the dozen who could step into the ring now, two are women, McMurry said.

She would, however, use her skills outside the ring if it came down to it. &#8220;There is a definite advantage to doing this,&#8221; Genus-Turner said. &#8220;Someone who wished to harm me, because he thought I was a victim, might be in for a surprise.

&#8220;The things I&#8217;ve learned while doing this are excellent ways to defend myself without causing serious damage [to an attacker].&#8221;