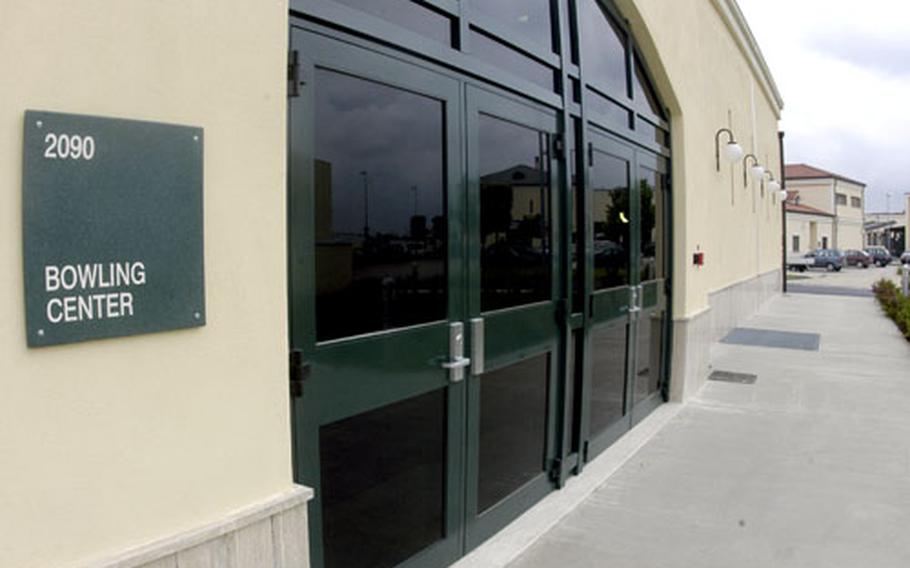 NAPLES, Italy &#8212; The much-anticipated bowling center/Irish pub will soon be a reality for sailors and families stationed in Naples.

News of the scheduled opening of the bowling lanes and O&#8217;Rhys Irish Pub on the support site at Gricignano was met with mixed emotions by some sailors who live on another base about a 20-minute drive away.

After years of pledges, the center&#8217;s opening has been slated for mid-June, according to Greg Seip, the local local Morale, Welfare and Recreation marketing director.

Some sailors who live on the Capodichino base say they feel a bit slighted.

Noble Romans operates a pub/casino at Capodichino that closes at 10 p.m. on weekdays and 11 p.m. on weekends. &#8220;The Subway [sandwich shop] is open later than the pub here. What does that say?&#8221; Vally asked.

The movie theater at Capodichino offers free flicks Wednesday through Sunday, but they aren&#8217;t new releases. &#8220;Most of us have these movies already on DVDs that we could watch in our rooms,&#8221; said Petty Officer 2nd Class Michael Brunais, 22.

As of now, there is no plan to ferry sailors between the bases, and no feasible public transportation available. While the base does provide shuttle runs, they accommodate working-hour schedules and are hardly conducive for late-night partying.

With the command cracking down on drunken driving, providing shuttles between bases is getting serious consideration, Seip said. Options include a once-a-week shuttle or having the command assign duty drivers, he said, adding &#8220;but it&#8217;s still in the process and too early to tell.&#8221;

Contractors recently installed the center&#8217;s 16 lanes, and MWR has contractors putting finishing touches elsewhere, such as on the snack bar. Noble Romans will run the snack bar and serve pizza, hamburgers, sandwiches and salads.

MWR eventually will offer special events such as cosmic bowling, intramural bowling, weekday and weekend tournaments, and children&#8217;s leagues. Party packages for events such as birthdays, anniversaries and retirements also will be available, with prices to be decided, Seip said.

The menu and prices are being decided.