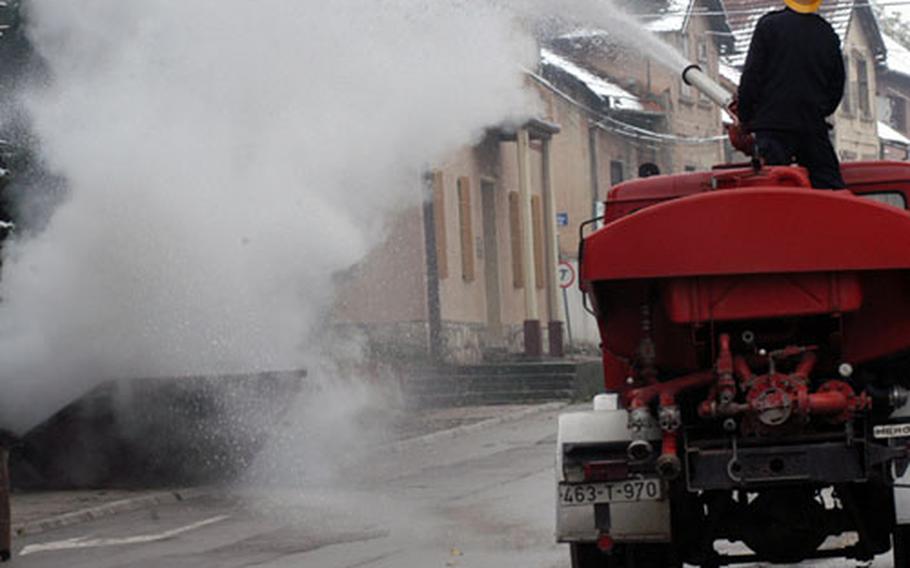 A firefighter puts out a fire in a trash bin during Saturday&#39;s joint exercise of fire departments from nine Bosnian towns. (Ivana Avramovic / S&S)

A firefighter puts out a fire in a trash bin during Saturday&#39;s joint exercise of fire departments from nine Bosnian towns. (Ivana Avramovic / S&S) 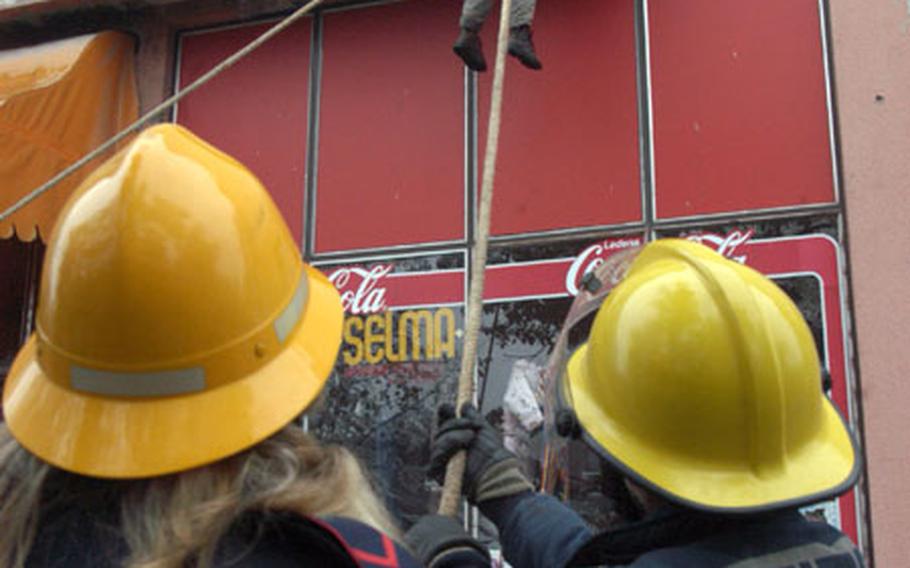 Firefighters from different towns pull ropes apart to allow for the safe landing of a boy being lowered from a window in a drill demonstrating civilian evacuation from a building on fire. (Ivana Avramovic / S&S) 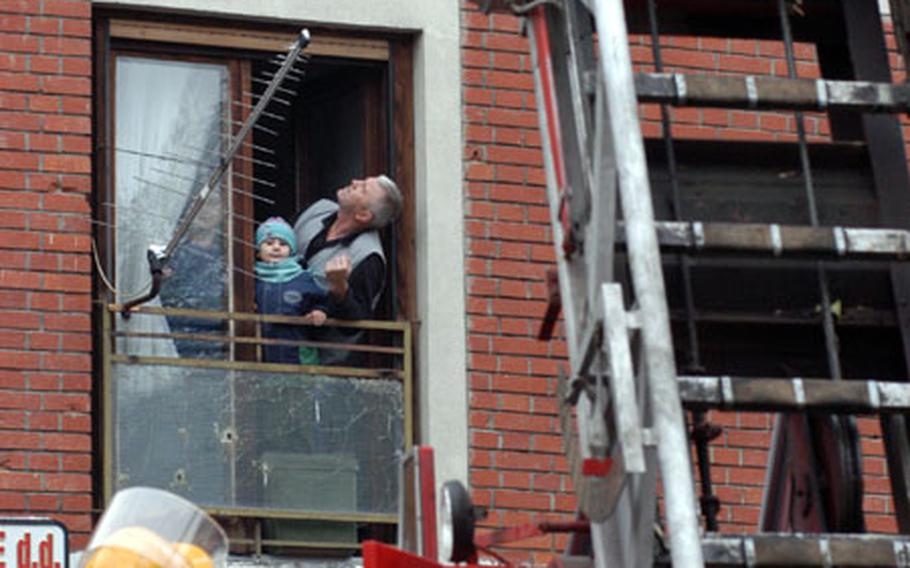 A family looks out the window as firefighters demonstrate their capabilities. (Ivana Avramovic / S&S)

For the first time since war broke out in Bosnia in 1992, sirens on firetrucks from the participating towns of Banovici, Bratunac, Kalesija, Kladanj, Milici, Olovo, Srebrenica, Sekovici and Vlasenica blared together. The trucks drove through Kladanj at the end of the exercise.

Currently in Bosnia, few departments work together. They wear different uniforms and use different firetrucks. On Saturday, some firefighters had Fire & Rescue Services written on their uniforms, others had Feuerwehr, German for fire department. Some uniforms were decades old and others more recent.

&#8220;I thought it was interesting,&#8221; said Sgt. 1st Class Richard Eggert of Company B, 2nd Battalion, 136th Infantry Regiment, a fire chief from Moorhead, Minn., who came to the exercise.

&#8220;Different ways of doing things,&#8221; added Sgt. 1st Class Ambrose Degidio of Headquarters and Headquarters Company of the 2nd Battalion of the 136th, and a volunteer firefighter from neighboring Detroit Lakes, Minn. The 136th is a National Guard unit from Minnesota.

The first drill started with firefighters putting out a burning garbage Dumpster, followed by extending a firetruck ladder to the roof of a building.

Then the youngest members of the Kladanj fire department, preteen boys, helped demonstrate how to rescue people from a burning building by sliding down a tarp or ropes held by older members.

This common rescue method &#8212; taking fire victims out through windows and then down ropes or tarps &#8212; was new to U.S. soldiers.

The U.S. soldiers, who are firefighters at home, showed some of their Bosnian contemporaries how they work in the States with a few PowerPoint slides. They also demonstrated how firefighters and Emergency Medical Service teams work together. The two are independent in Bosnia.

The soldiers plan to contact their fire departments and arrange for the donation of some much-needed firefighting tools.

A bit of what the Americans gave Saturday was advice.

&#8220;We want to show them how mutual aid works for us. Even though [Eggert is] a professional and I&#8217;m a volunteer, we still do mutual training,&#8221; Degidio said of how different fire departments would team up to fight a common blaze.

The Bosnian firefighters understood the importance.

The fire departments agreed to hold demonstrations each month. The association&#8217;s presidents would rotate as the exercise moves from town to town.

Kuluglic hopes the association&#8217;s efforts will lead to standardization of methods, rules and uniforms, and the foundation of a national association that will enable them to work together with different international firefighting organization.