Bosnia mission had its critics and supporters from the beginning 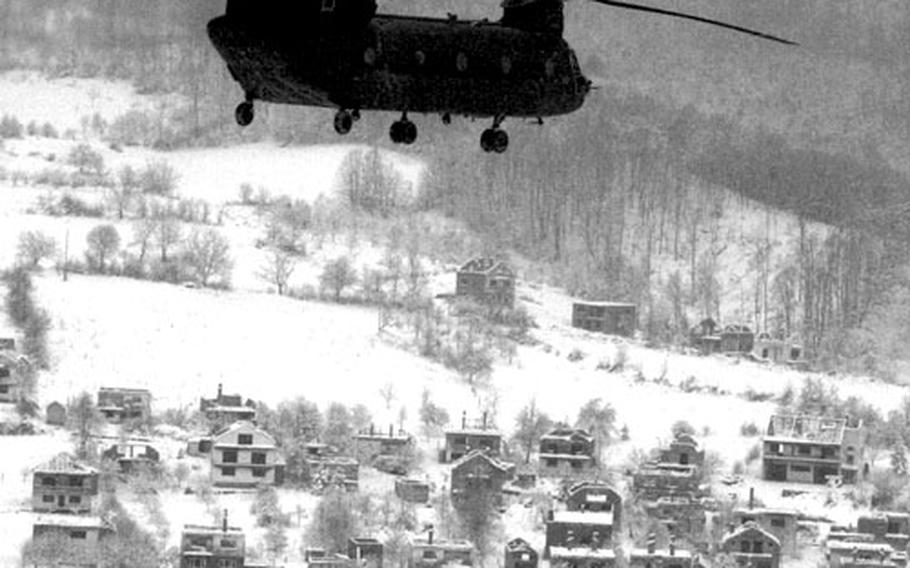 A Chinook of the 159th Aviation Regt. flies over a destroyed village in Bosnia early in the IFOR mission. The scars of war were a familiar sight for IFOR soldiers in Bosnia. (Effie Bathen / S&S file photo)

A Chinook of the 159th Aviation Regt. flies over a destroyed village in Bosnia early in the IFOR mission. The scars of war were a familiar sight for IFOR soldiers in Bosnia. (Effie Bathen / S&S file photo) 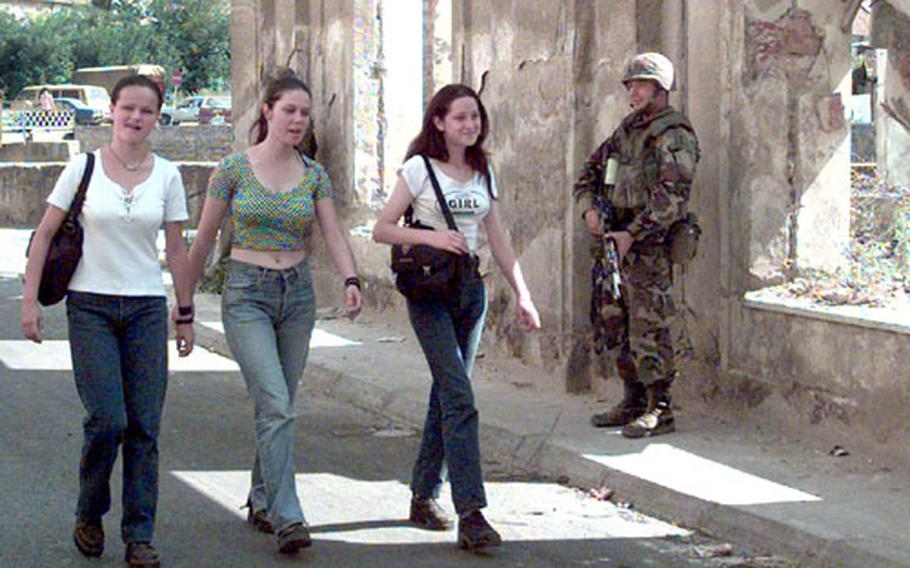 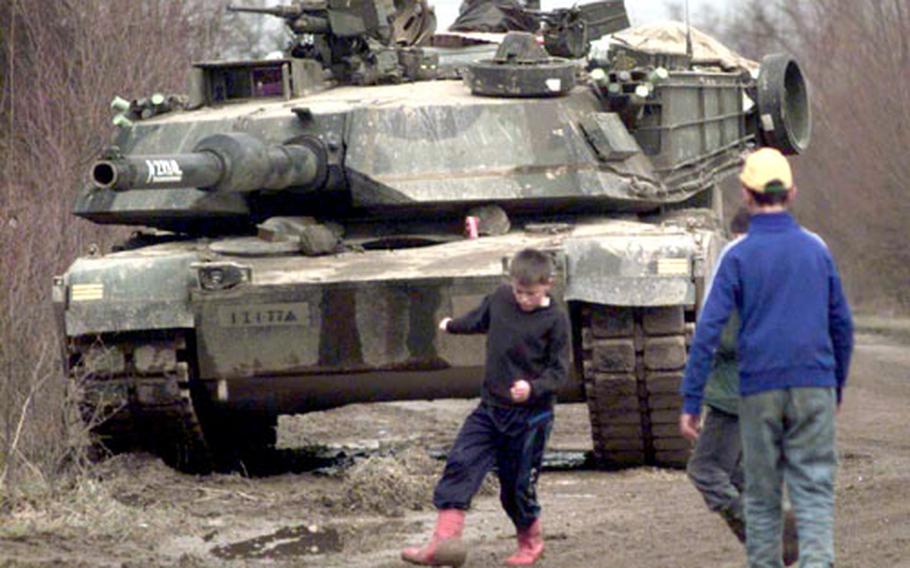 The road to Brka and the battle tanks that guard its passage serve as a backdrop to young boys playing a game of soccer, using the tank as the goal. (Javier Chagoya / S&S file photo) A soldier snowman guards a tent at an Eagle Base tent city in December, 1996. Members of D Battery, 4th Battallion, 3rd Air Defense Artillery ot of Kitzingen, Germany, built their frosty friend during a little down time. (S&S file photo) During a U.S.-Russian SFOR training mission near Camp Bedrock in June, 1997, UH-60 Blackhawk Helos descend with 36 soldiers on board who will set up a security checkpoint. (S&S file photo)

According to the polls, America is split over the ongoing presence of U.S. forces in Iraq. More than 2,000 servicemembers have been killed, and attacks continue against both Iraqi and American forces even while the country&#8217;s former dictator is on trial.

But controversy and U.S. missions abroad tend to go hand in hand, especially in recent decades. Servicemembers were sent to Somalia and Rwanda in the 1990s, not long after spending time in the desert sands to push Saddam Hussein&#8217;s forces out of Kuwait. And there was Panama. Grenada. Haiti.

All had their supporters and their critics. U.S. efforts in Bosnia and Herzegovina, covering a longer commitment than any of the others, are no different. Not a single American servicemember was killed in hostile action in the country, yet Bosnia still has international peacekeepers a decade after the Dayton peace accords were signed.

Three years after the U.S. part of the mission began, Gary Dempsey authored an article on the Cato Institute&#8217;s Web site, declaring the mission was wearing both the Army and Air Force too thin, hurting retention and costing the U.S. billions of dollars a year.

Five years into the mission, a posting on the Center for Defense Information Web site found both good and bad. It said U.S. and NATO forces were able to stop the fighting and separate the combatants, but hadn&#8217;t achieved much on the civil front. Essentially, the article argued the allies &#8220;succeeded admirably on the first count, but faltered on the second.&#8221;

Yet two years after that &#8212; amid calls for an American pullout &#8212; Michael Stanisich of Refugees International posted a plea for continued U.S. involvement in both Bosnia and the newer mission in Kosovo: &#8220;The overall picture that emerged from RI&#8217;s assessment mission is one of U.S. forces making a significant contribution to stability and reconciliation in the region.&#8221;

So how is the Bosnia mission viewed today?

&#8220;Clearly, the country was stabilized and made secure by the U.S. and NATO missions,&#8221; he said. &#8220;There&#8217;s been progress, particularly in the past year, in integrating the militaries. Another key success, to my mind, is there have been no casualties, other than accidents.&#8221;

The Bosnian Serbian leader and his top general remain at large, providing potential malcontents rallying points and undermining faith by others in international authorities.

Bugajski said in retrospect that the U.S. and NATO should have been more aggressive in the beginning, labeling the inability to capture the suspected war criminals &#8220;a failure of will, a failure of momentum.&#8221;

He said at least some of the American hesitancy could be attributed to opposition by other NATO allies to aggressive tactics.

James Dobbins, director of the International Security and Defense Policy Center at the Rand Corporation, also pointed to relationships with European allies and the United Nations as a point of failure. He said European countries and the U.N.&#8217;s High Representative should have been given more power and responsibility to begin with.

Efforts to stand up police, set up courts and establish political parties &#8220;were started late. So the mission probably took a few years longer than it would have otherwise.&#8221;

&#8220;I think the view [of the mission] is pretty positive at the moment and probably will become even more positive over time,&#8221; he said. &#8220;Obviously, that depends somewhat on what happens to Bosnia itself.&#8221;