Using the Jaws of Life, firefighters cut the car door to free a trapped car accident victim while Task Force Med Eagle medics extract the passenger during a joint exercise on Saturday at Eagle Base, Bosnia and Herzegovina. (Ivana Avramovic / S&S)

Using the Jaws of Life, firefighters cut the car door to free a trapped car accident victim while Task Force Med Eagle medics extract the passenger during a joint exercise on Saturday at Eagle Base, Bosnia and Herzegovina. (Ivana Avramovic / S&S) 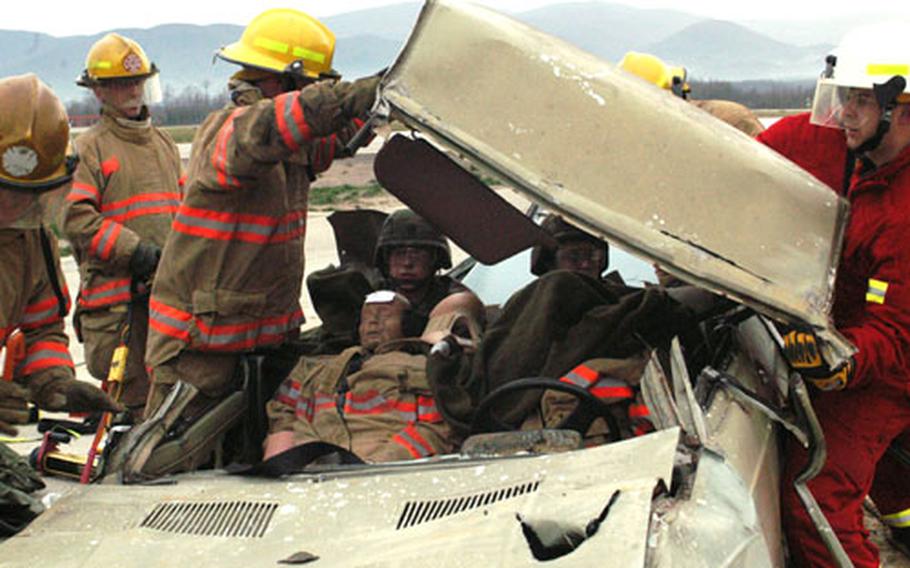 Firefighters remove the car roof to extract those injured during an exercise with Task Force Med Eagle on Saturday at Eagle Base, Bosnia and Herzegovina. A couple of medics crawled into the back of the car to stabilize the necks of the casualties - practice dolls. (Ivana Avramovic / S&S) Brown and Root firefighters extinguish a burning car during an exercise with Task Force Med Eagle on Saturday at Eagle Base, Bosnia and Herzegovina. (Ivana Avramovic / S&S)

EAGLE BASE, Bosnia and Herzegovina &#8212; The firefighters rushed to the scene of the car accident to put out the fire. Air and ground ambulance crews followed within seconds to rescue the occupants trapped inside two civilian vehicles.

In a simulated scenario that was as close to real life as possible without anyone getting hurt, Task Force Med Eagle medics and Brown & Root firefighters practiced conducting a rescue for the first time during this Stabilization Force rotation.

&#8220;We wanted to simulate off-base accidents which could be very common, especially this winter while we&#8217;re here,&#8221; said Capt. Christine Ostendorf of the task force and the officer in charge of the exercise.

The medics and civilian firefighters had practiced different scenarios in several mini-drills, and had a chance to incorporate everything in Saturday&#8217;s exercise.

The situation seemed chaotic to inexperienced observers, but the firefighters and medics running around cutting up vehicles to extract the mannequins serving as passengers and then giving them medical treatment knew exactly what they were doing.

&#8220;In a situation like this, it&#8217;s always going to be pretty hectic,&#8221; said task force member Sgt. Mistica Olson, the ground ambulance driver, who also crawled in the back of a car involved in the accident to help stabilize the neck of a casualty.

Sgt. Anne Moss, the medic in charge on the scene, said traffic accidents are the biggest threat the medics face in Bosnia. &#8220;Should this ever occur, we want to be able to respond,&#8221; she said.

The exercise was critical not only because it gave the National Guardsmen more training, but also because Danish medics had been providing ground ambulance services before they pulled out of the mission in July.

The medics did a lot of driving off base to get used to Bosnia&#8217;s narrow and busy roads. They also took time to learn how the firefighters cut a car apart to extract casualties.

And the simulated exercise also gave them a look into communications on the scene.

While all involved said they were pleased with the exercise, it also gave them a chance to pinpoint what they want to perfect.