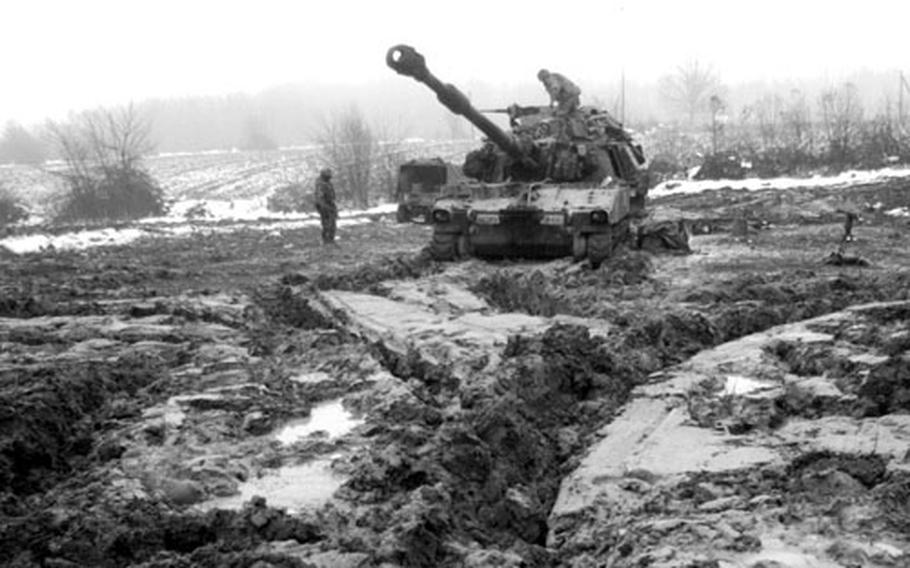 Soldiers from the 1st Brigade attempt to dig their howitzer from the knee-deep mud in January 1996, while setting up camp 45 kilometers north of Tuzla. (S&S file photo)

Soldiers from the 1st Brigade attempt to dig their howitzer from the knee-deep mud in January 1996, while setting up camp 45 kilometers north of Tuzla. (S&S file photo) 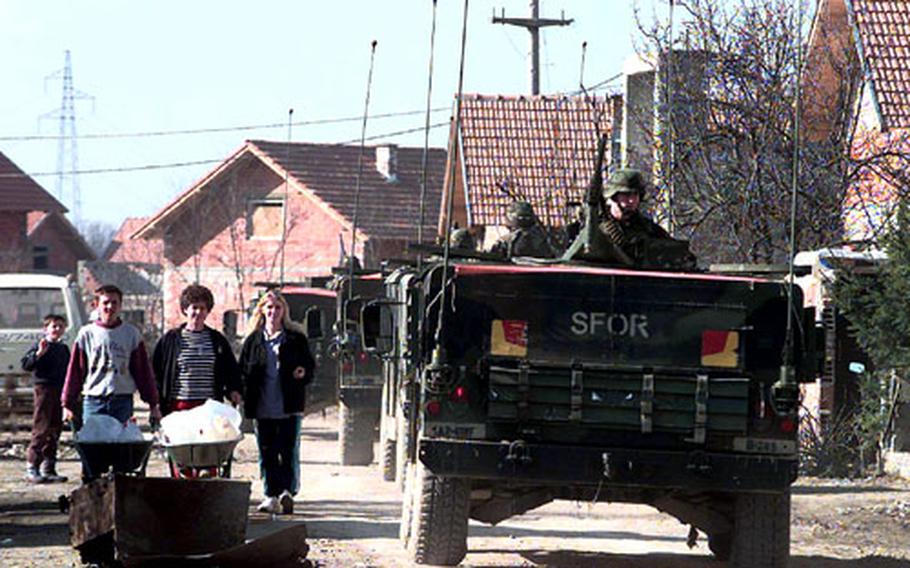 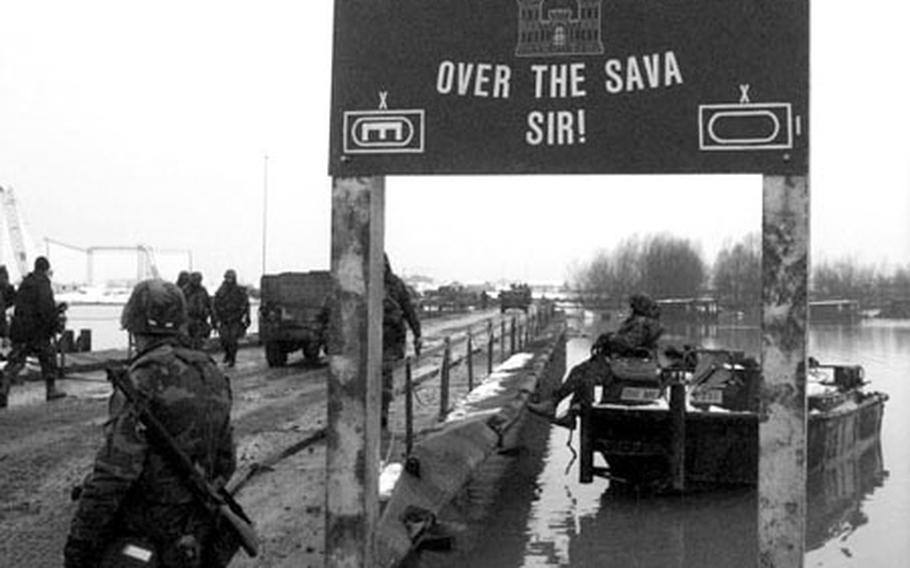 January, 1996: The road to Bosnia finally became clear for travel after the pontoon bridge spanning the Sava River was connected. (Carlos Bongioanni / S&S) 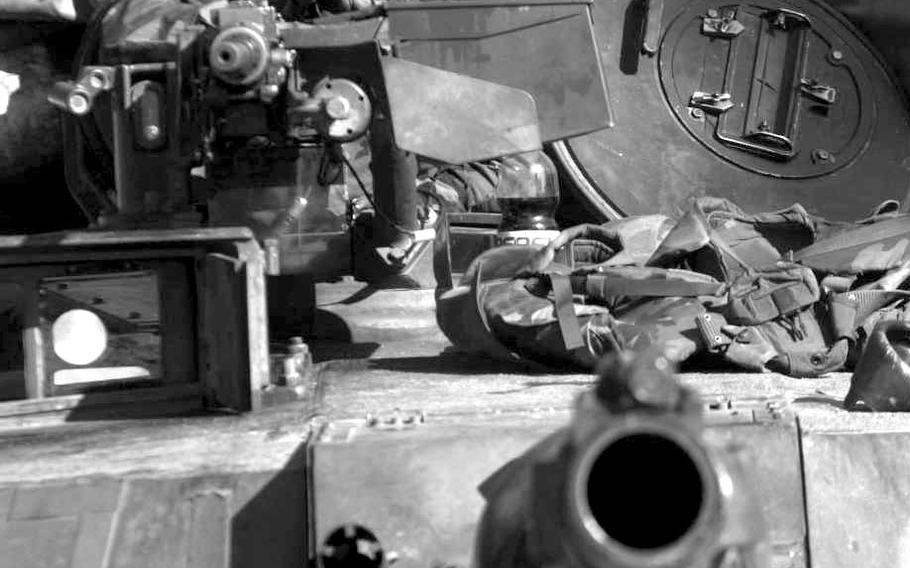 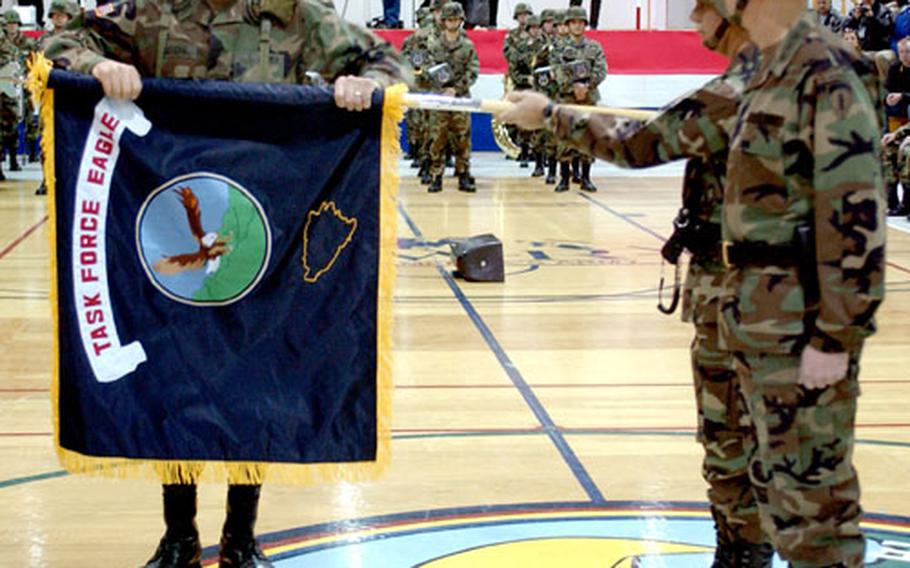 (First of a three-part series)

At a nearby airfield, the fog wouldn&#8217;t lift long enough to fly in planeloads of soldiers and supplies.

Ten years ago, Bosnia and Herzegovina was a damp, cold, haunting place. Weapons of war were plentiful, and evidence of the will to use them was plastered everywhere.

To the north, a French rail strike and an anti-nuclear protest in Germany hampered the flow of transport trains carrying military goods. Germany &#8212; an ally &#8212; was stepping out in force for the first time since World War II.

Complicating matters, there were at least a half million land mines lacing the landscape, and a few snipers to keep things interesting.

And it was the coldest war since Korea.

In three years, more than 200,000 people were killed in the war and related atrocities.

Compared to military operations in Afghanistan and Iraq, the U.S.-led peacekeeping mission in Bosnia now seems like a rather trifling affair. Four soldiers died in Bosnia, none from hostile action.

As of late December, more than 2,170 servicemembers have died in Iraq, including nearly 1,700 in combat.

And yet a decade ago, long before campaign streamers for Afghanistan and Iraq were being stitched, Bosnia was the center of the universe for soldiers, statesmen, aid workers and journalists. Nearly 20,000 U.S. servicemembers, many of them Army troops based in Germany, were entering Bosnia to enforce the Dayton peace accords.

The Balkan wars of the 1990s primarily involved three ethnic groups: Croats, Muslims and Serbs. The first two wanted independence for Croatia and Bosnia, while the latter preferred to keep the four remaining republics of Yugoslavia &#8212; Bosnia, Croatia, Montenegro and Serbia &#8212; under the same roof.

The division among the three led to open warfare in 1992, bringing death and destruction to many, especially the Bosnians.

&#8220;Let us never forget a quarter of a million men, women and children have been shelled, shot and tortured to death,&#8221; President Clinton said in a November 1995 address to the nation. &#8220;Two million people, half of the population, were forced from their homes and into a miserable life as refugees.&#8221;

The decision to intervene in the three-year-old Bosnian civil war was not a hasty one. Some people felt the West should have moved quicker to end the bloodshed triggered by the break up of Yugoslavia.

In Bosnia, an ethnic melting pot, the fighting and tactics were especially brutal, based on reports of concentration camps, gang rapes, mass graves and ethnic cleansing, a phrase that would become synonymous with the war.

While neither party wore a white hat, ethnic Serbs were considered to be the most rabid of the lot.

The watershed event that ultimately brought peace came in July 1995, when Serbian paramilitary forces over several days massacred almost 8,000 Muslims in the area of Srebrenica in eastern Bosnia. Televised images of Serbian forces handcuffing Dutch peacekeeping troops further infuriated the West, leading to negotiations that ended with the Dayton peace accords, which sanctioned a NATO-led peacekeeping force in Bosnia.

For many U.S. troops sent to serve in the Implementation Force, the deployment was their first exposure to skeletal buildings, bullet-ridden walls and war refugees.

A U.S. military advance team arrived in Bosnia in late November to set the table. Though frustrated by days of thick fog, the Air Force managed to fly a few hundred members of the 3rd Battalion, 325th Infantry Regiment paratroops into Tuzla Air Base from Vicenza, Italy, in mid-December.

Army Sgt. Maj. David Price, who is now deployed to Tuzla with a California National Guard unit, said problems with fog persist to this day. Earlier this month, it took three attempts to get a 13-member advance team into Tuzla, Price said.

Ten years ago, while troops at Tuzla Air Base cursed the fog, steady rain and a swollen river was thwarting efforts for a Christmastime crossing of the Sava River. Since the war left most bridges in the area out of commission, Army engineers were constructing a pontoon version near Zupanja, to enable the 1st Armored Division to cross into Bosnia.

However, the Sava flooded twice, forcing engineers and support personnel to abandon their tent city each time. Despite the drama, the Army breached the Sava River on the morning of Dec. 31, 1995, making it the largest crossing of its kind in a half-century.

Like many soldiers, Spc. Jacob Endres and others in his missile repair unit, settled into accommodations that were less than what they were accustomed to. Some slept in wind-blown tents tenuously anchored in muddy farm fields while others found hardened shelters. Endres, who is now a sergeant first class in Dexheim, Germany, stayed in a partially burned-out tobacco factory.

In the months and years that followed, the Army greatly improved the soldiers&#8217; living conditions, building base camps with amenities that served as a sort of template for Kosovo and other future operations.

On the mission side, weapons were put into storage, warring parties were separated, refugees were urged to return home, police were trained, elections were held, and time passed without a resumption of hostilities, allowing people to slowly rebuild their lives, homes and businesses.

After a couple of years, U.S. troop strength dropped to around 7,000, and continued to drop until December 2004, when the European Union took over the peacekeeping mission from NATO. Overnight the number of U.S. troops dropped from roughly 1,000 to about 200.

While the U.S. military has moved on to more dangerous venues, many servicemembers who spent time in Bosnia look back favorably on the experience. Bosnia has its challenges &#8212; organized crime, unemployment, pollution, substandard infrastructure &#8212; but the 10-year-old peace has held as leaders talk of one day joining NATO and the EU.

Tomorrow: A look at Bosnia today, from the hunt for war criminals to the structure of the current peacekeeping force.