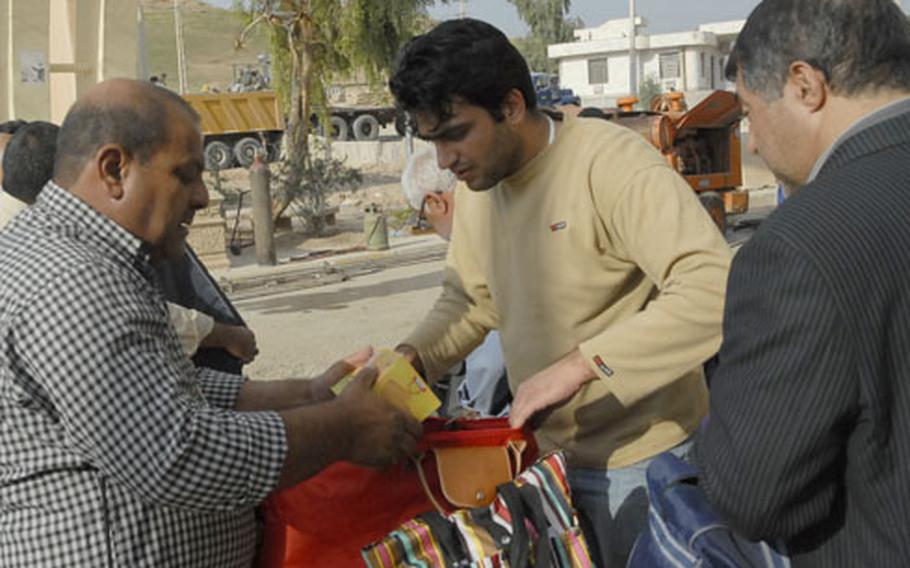 A border agent, left, hand-searches luggage at a crossing near the town of Konnikin. The Iraqi Border Patrol is undermanned, often resulting in long lines at crossings between Iran and Iraq. (Photos by Heath Druzin/S&S)

A border agent, left, hand-searches luggage at a crossing near the town of Konnikin. The Iraqi Border Patrol is undermanned, often resulting in long lines at crossings between Iran and Iraq. (Photos by Heath Druzin/S&S) Travelers cross from Iraq to Iran at a border crossing in northeast Diyala Province. An undermanned and underequipped Iraqi Border Patrol is having trouble controlling the flow of weapons and fighters from Iran. ()

MANDALI, Iraq &#8212; In the rugged, desolate terrain outside this dusty frontier town, armed men in castle turrets face off on opposite sides of a meandering river.

The scene, reminiscent of medieval Europe, takes place daily on the porous Iran-Iraq border, where U.S. forces and poorly equipped members of the Iraqi Border Patrol struggle to control the flow of fighters and weapons.

"The border is like a sieve," said Col. Burt Thompson, whose soldiers with the 1st Stryker Brigade Combat Team, 25th Infantry Division are tasked with keeping tabs on the border in Diyala province.

Minefields, left from the bloody war Iraq fought with Iran in the 1980s, dot both sides of the border and are visible from many of the Iraqi border posts &#8212; small brick or stucco buildings with turrets, which the Iraqis call castles.

A lucrative black market business has sprung up along the border, with destitute Iraqis collecting the mines and selling them to insurgents, said Lt. Col. Mike Kasales, who commands a squadron of soldiers responsible for about 130 miles of border. At up to $200 for an anti-tank mine, it&#8217;s a tempting proposition for both unscrupulous opportunists and poor farmers hammered by a lengthy drought in Diyala province.

While most bomb attacks against vehicles get lumped into the "improvised explosive device" category, there&#8217;s nothing improvised about the majority of such attacks in Diyala, Kasales said &#8212; they&#8217;re anti-tank mines being used as they would be in traditional warfare.

Weapons and fighters are also crossing the border, entering Iraq by truck, donkey and on foot. The scope of the problem is difficult to grasp, U.S. and Iraqi officials said. "What is it that we don&#8217;t know that&#8217;s happening there?" Thompson mused.

Iraqi Border Patrol officers interviewed for this story said they have intercepted suspected Iranian insurgents, explosives and weapons, but almost always in small shipments, which are especially difficult to detect. They all said they need more men and more equipment.

It&#8217;s unclear whether weapons come over in dribs and drabs or whether an undermanned border patrol is simply not catching the big targets. Kasales believes Iranian agents are getting across the border, but he&#8217;s skeptical there&#8217;s a wave of fighters sneaking into the country.

Hampering the effort to stem this movement is the unforgiving terrain. The Hadidi Mountains in northern Diyala province are cut by countless wadhis, or dry creek beds, where people and animals can follow the sandy curves unseen.

Some tribal areas also straddle the border and in some of those areas people cross daily, without the filter of a border post. Tens of thousands of Iranians come to Iraq each year for commerce and to visit Shiite holy sites.

Kasales is on his third tour of Iraq and has seen the evolution of the Iraqi Army and Iraqi Police. The border patrol was last in the security pecking order and remains undermanned and underequipped, he said.

Border security has also taken a backseat for U.S. forces in the area, who deal with the more immediate threat of roads littered with bombs, said Maj. Allan Thomas, who works with border patrol officers.

Col. Hassan Ali, one of those Iraqi officers, said he has lost more than 40 patrol members to roadside bombs in the past four years. He says he doesn&#8217;t have the manpower to focus on smuggling, though his men did stop a mule train carrying 300 anti-tank mines earlier this year.

Increasingly, U.S. troops are working with Iraqis to tighten border security. At a crossing near the town of Konnikin, hundreds of travelers lined up on the Iranian side of a tall metal gate, waiting to be checked by a lone officer at the entry&#8217;s only door.

On any given day, more than 1,000 people enter Iraq through the crossing, said Sgt. 1st Class Robert Davenport. Lacking scanners, Iraqis check all bags by hand and travelers sometimes must wait hours to be processed.

Davenport and a team of U.S. soldiers trained in port-of-entry procedures are working with their Iraqi counterparts on more efficiently processing people. One area that needs work, Davenport said, is hand-checking luggage.

"When you do that, you negate everything else," he said.

Ultimately, though, without more support from the Iraqi government, border security will continue to lag, Davenport said.