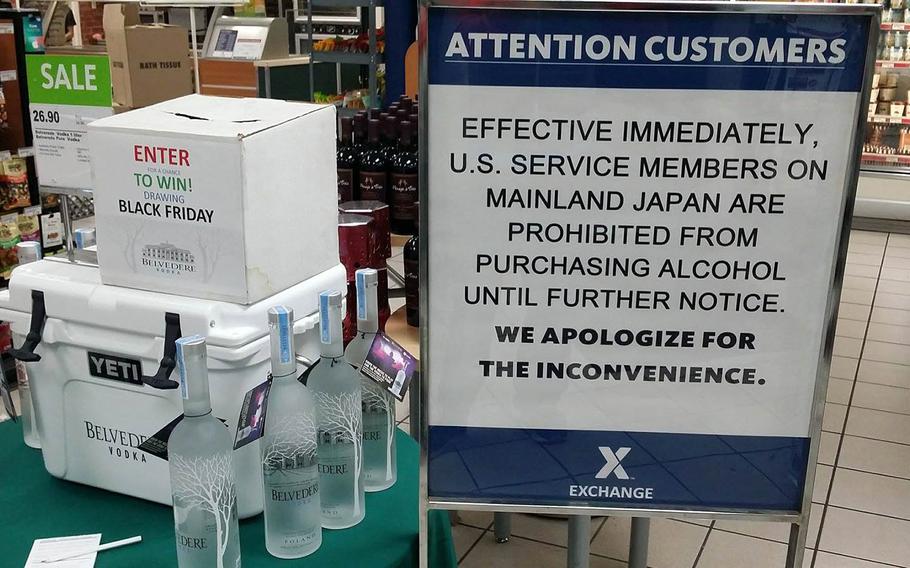 A sign at a convenience store at Yokota Air Base, Japan, reminds servicemembers of an alcohol ban, Tuesday, Nov. 21, 2017. (Leon Cook/Stars and Stripes)

YOKOTA AIR BASE, Japan — Servicemembers in Japan can expect a ban on alcoholic beverages to last at least through Thanksgiving, a wing commander told troops Tuesday in western Tokyo.

Over the weekend, the U.S. military ordered servicemembers in Japan not to buy or consume alcohol “until further notice” after Okinawa police arrested Lance Cpl. Nicholas James-McLean, 21, on suspicion of negligent driving resulting in death and driving under the influence of alcohol.

Hidemasa Taira, 61, was killed early Sunday after his minitruck was involved in a collision with a military-owned vehicle driven by James-McLean. Naha police planned to refer the case to prosecutors on Tuesday.

Lt. Gen. Lawrence Nicholson, commander of U.S. Marines in Japan, told Okinawa's anti-bases governor that he would step up efforts to make sure all Americans on the island understand that such accidents will not be tolerated, Japan's NHK television reported Tuesday.

Servicemembers gathered Tuesday for an all-hands call at Yokota’s Enlisted Club wanted to know how long the alcohol ban would remain in effect.

Col. Kenneth Moss, commander of the 374th Airlift Wing, said he had no idea but told them to “expect to celebrate Thanksgiving with your favorite bottle of sparkling apple cider.”

Commanders across Japan have been leading mandatory training to address alcohol use, risk management and acceptable behavior. All military members and U.S. government civilians in Japan are required to attend.

“The goal is to report back to [Adm. Harry Harris, head of U.S. Pacific Command] today or tomorrow that we are 100 percent complete in all the training,” Moss said. “We’ve reviewed the responsible use of alcohol, the risk management, and we’ve reviewed the implications of your behavior, with the idea that that will mitigate some of the outrage over this.”

“We had a 20, 21, 22-year-old Marine who woke up Sunday morning with no ill intent, had a couple of beers and for whatever reason got in a [government-owned vehicle],” Moss said.

The accident cost the life of a local national and impacted a young Marine who had his entire future ahead of him, the commander added.

“That’s why we are taking this seriously,” he said.

Moss encouraged servicemembers to focus on Vigilant Ace, an upcoming exercise with South Korean forces that will see Yokota personnel practice their response to nuclear, biological and chemical attacks.

“Hopefully you can celebrate an exercise well achieved and a job well done with the beverage of your choice after Vigilant Ace,” he said.