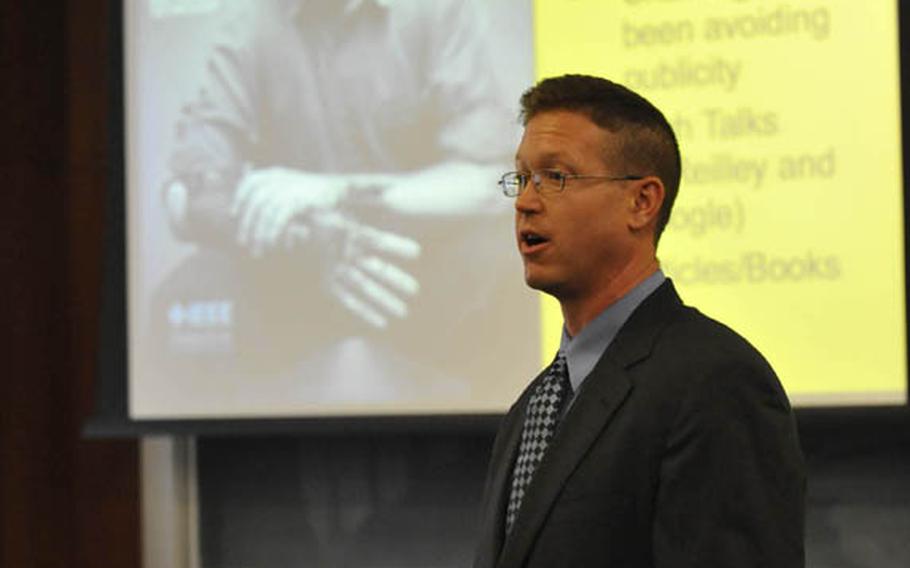 Jon Kuniholm pitches his business idea, Stumpworks, at the 2009 Entrepreneurship Bootcamp for Veterans at Syracuse University. Kuniholm, a former Marine, lost his arm to a roadside bomb in 2005 in Iraq. (Courtesy of Syracuse University)

Jon Kuniholm pitches his business idea, Stumpworks, at the 2009 Entrepreneurship Bootcamp for Veterans at Syracuse University. Kuniholm, a former Marine, lost his arm to a roadside bomb in 2005 in Iraq. (Courtesy of Syracuse University) 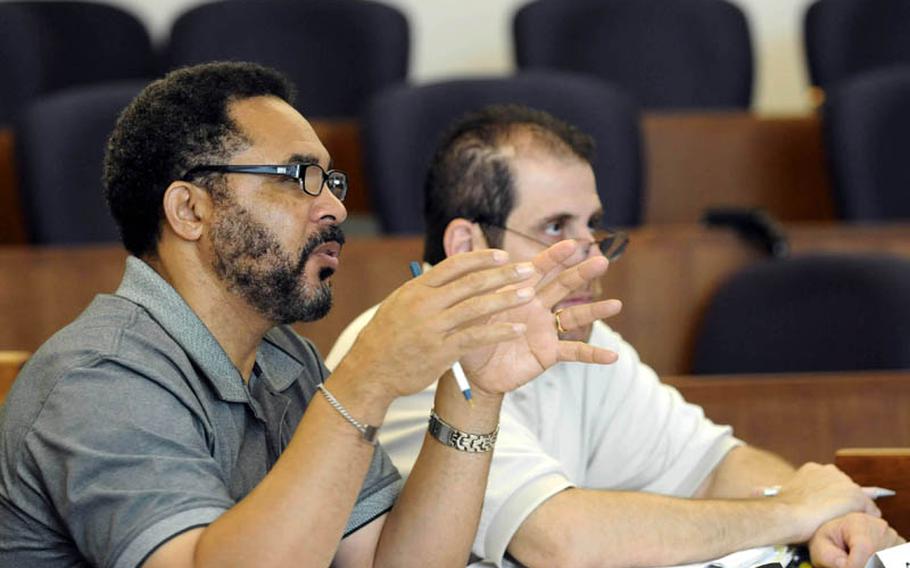 Erogies Grigley, left, a former U.S. Army lieutenant colonel, asks a question during a 2008 session of the Entrepreneurship Bootcamp for Veterans at Syracuse University. Next to him is Jerry Garritillo, who spent 20 years with the U.S. Air Force as an avionics technician and later as a recruiter. (Courtesy of Syracuse University)

TOKYO &mdash; John Raftery once felt trapped in a cubicle. Now the former Marine makes millions in sales off them.

Raftery left the Marine Corps in 2003 on the heels of a tour in Iraq. He went to college to study accounting while working a half dozen jobs that led nowhere. In 2007 he ended up in a cubicle, tallying up someone else&rsquo;s profits.

&ldquo;I wasn&rsquo;t real happy,&rdquo; Raftery, 31, said last week. &ldquo;I needed to get out and do something.&rdquo;

And he needed help directing his career ambitions into a business that would turn a profit. So he turned to the Entrepreneurship Bootcamp for Veterans with Disabilities, a program that started at Syracuse University in 2007 and has spread to five other university campuses nationwide. To date, the program has helped 300 veterans write business plans, navigate tax laws, choose incorporation vehicles and put their ideas into products that people want to buy.

Three years later, he and a partner have turned a $40,000 investment into Patriot Contractors, Inc., a company that installs partitions, cabinetry and even those cubicles inside offices and restrooms. The Red Oak, Texas, company now has 10 employees and expects to do $2.5 million to $3 million in sales this year.

The business boot camp concept &mdash; called the EBV &mdash; has blown up as well. Since 2007, the program has spread to five other campuses nationwide, with more than 300 veterans participating to date, according to Mike Haynie, a former Air Force officer and Air Force Academy instructor who launched the bootcamp at Syracuse&rsquo;s Whitman School of Management.

The program remains free to the 150 students accepted each year. The only requirements for admission, Haynie said, is that the person be a service-disabled veteran &mdash; of any disability level &mdash; and have the desire to be an entrepreneur.

Haynie said he got the idea for the program as some of his former Air Force students were returning home from Iraq and Afghanistan suffering from or talking about wartime injuries. At the same time, he said, he knew that military veterans typically fare better than civilians when it comes to starting a business. On top of that, entrepreneurship can be a perfect fit for disabled or recovering veterans, he said.

&ldquo;For all the reasons that traditional jobs are hard, business ownership mitigates many of those challenges,&rdquo; said Haynie, who now teaches at Syracuse. &ldquo;You can craft a vocation to do it in a way that is flexible, dealing with some of the challenges, and vets are good at this.&rdquo;

The inaugural class had 20 students, including Raftery. To date, 17 have businesses that are the veterans&rsquo; sole vocation, Haynie said. Four of those did more than $1 million in business last year, he added.

He eventually did, graduating from Temple University&rsquo;s film school in the midst of a 13-year career with the Marines. He left in 2008 as a captain who had two tours in Iraq, an injured spine after a roadside bomb explosion, and the skills to make a film.

What he didn&rsquo;t know was how to make money in the film industry.

&ldquo;Literally, I was just alone and afraid,&rdquo; he said. &ldquo;It was really difficult. You have so much self-worth being a Marine. You have a leadership position, and you get out, and that doesn&rsquo;t translate.&rdquo;

He found the translation at the EBV, where he got advice on tax laws, marketing, competitiveness and setting up a business. Then he and a partner used their savings and credit cards to round up close to $100,000 for camera gear, MRE packets, and a van to travel the country talking to Korean War veterans.

The result was &ldquo;Chosin,&rdquo; a documentary about the battle for the Chosin Reservoir in November and December 1950. It won best documentary at the G.I. Film Festival in May, is scheduled for screenings in Los Angeles and New York City, and now is part of a feature film project called &ldquo;17 Days of Winter.&rdquo;

&ldquo;They don&rsquo;t do it for you,&rdquo; Iglesias, 33, said of the help he got at the boot camp. &ldquo;But they shine the light and show you the way.&rdquo;