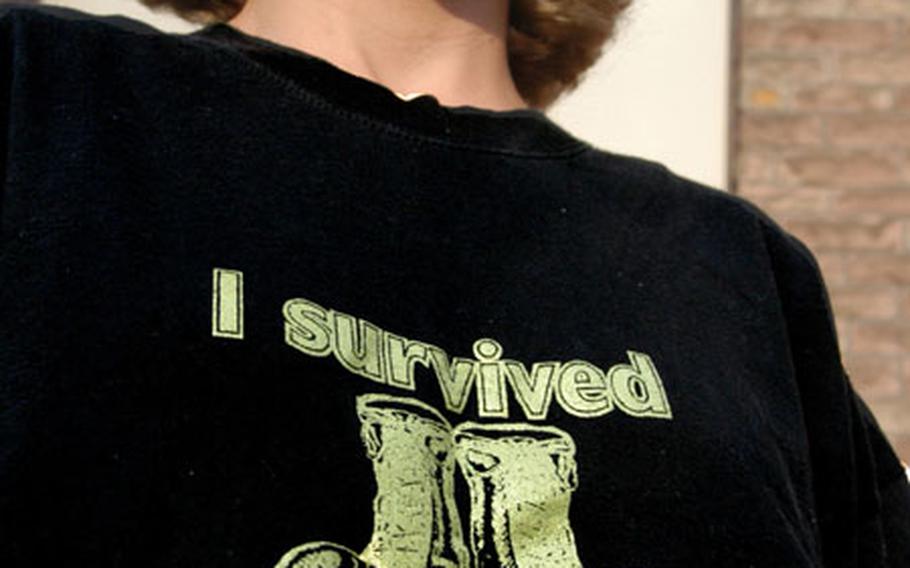 All around America, seemingly sane people are paying &#8212; and sometimes paying big &#8212; for the agonies of boot camp.

It&#8217;s the stuff of memory for people in the military, and at least they were paid for it. But fitness boot camps, ranging from the remedial to the really mental, are a faddish rebellion against aerobics and spandex.

Another operation, Team Delta in Quincy, Mass., offers boot camp as well as a &#8220;POW Interrogation and Resistance Training Program.&#8221;

&#8220;They&#8217;re trying to get rid of the choreography and get back to the basics,&#8221; says Susanne Dale, fitness coordinator for the 221st Base Support Battalion at Wiesbaden Army Airfield in Germany. Dale commands her own overseas version, with a twist: Most of its recruits are Army wives. It&#8217;s their way to get fit and catch a glimpse of how their other halves live.

In September, 35 people signed up for eight weeks at a relatively modest $50. It&#8217;s the biggest squad Wiesbaden has seen in two years of offering the camp. They muster twice a week.

Her program is considerably less psycho than some in the States. It&#8217;s mostly calisthenics and running, with some shouting thrown in to get the blood going.

Even so, recruits are given a fitness screening. Some wind up being asked to seek a doctor&#8217;s clearance.

Initial turnout isn&#8217;t a problem. Keeping the folks coming back is. In the past, the program has had around 25 people begin each camp. Seven finished this year&#8217;s first camp; a dozen finished the summer session.

Some, though, keep enlisting. Like Jennifer Smith, a 28-year-old Army wife who finished the summer session and is now tackling the autumn.

The summer sessions were still rough &#8212; mustering on pavement gone wavy at more than 100 degrees, the air wringing with humidity. Some recruits threw up.

It all begins on a breezy September evening. A handful of return customers from the summer arrive even before the drill instructors. They learned the hard way.

Margie Anderson, the more, er, vocal instructor, says she is trying to figure out how much work her new charges require. Recruits usually fragment into their own groups depending on fitness level. Some move into leadership roles, just like in real boot camp.

The instructors command that their dawdling recruits line up. Two stumble in late. Five more follow.

Then they&#8217;re off the pavement, bounding into the grass beside a vista of parked tanks.

Then Gene Hickman, a 55-year-old Army employee and one of just two men in the group, jogs up.

No problem, the drill instructors reply. Welcome to push-ups. The entire squad must drop. Each latecomer leads the set in her or his honor. The rest chant their appreciation for the extra work.

All told, they do about 40 push-ups, a lot for a first day. And they weren&#8217;t even part of the plan. Most recruits fall from their toes and onto their knees as the sets continue.

Stewart watches from beside one of the tanks. She quietly admits she isn&#8217;t much of a harrier herself. A couple of the women spring lightly at the front of the group.

Most huff and blow. Some walk. Some talk.

The trick is to push them to The Edge. This place has more in common with the pro wrestler than with the guy who plays guitar for U2. The Edge is where the sergeants shout just enough so that recruits snap to it, but not so much that they just plain snap.

Most of Wiesbaden&#8217;s soldiers are away in the Middle East. As in other times of mass deployment, the base gym is busy. It&#8217;s something Dale relates to herself, having endured her husband&#8217;s yearlong mission to Afghanistan alone with her two children.

&#8220;So many women are in the gym trying to look better for their husbands when they get back,&#8221; she says. Those who enlist for her boot camp simply need extra pressure and some esprit de corps to get them going.

Their 15-minute run over, the squad tastes a few drops of water. Someone&#8217;s daughter is rolling around in the grass, enjoying this more than her mom. A couple of limber runners grin.

Everyone else is purple. Returnee Smith jogs up, flushed but smiling.

But they&#8217;re back in their line again, doing more calisthenics. They do crunches and contortions. Faces contort, too.

They dream of rest. Or maybe even a sandwich.

While a few recruits follow along easy, many have faces that look like tomatoes. Speaking of tomatoes, they are better than anything a la cr&#232;me.

Hickman, half the male population of the squad, said the lack of testosterone in the field was a surprise, but not an issue. As for the drills, they were painfully familiar. He&#8217;s a retired first sergeant. A real Sarge.

Smith&#8217;s smile remains in pearly place even at the end. She&#8217;s recruited friend Karen Millay, who says the session was rough. But she, as a certain gubernatorial candidate once pledged, will be back.