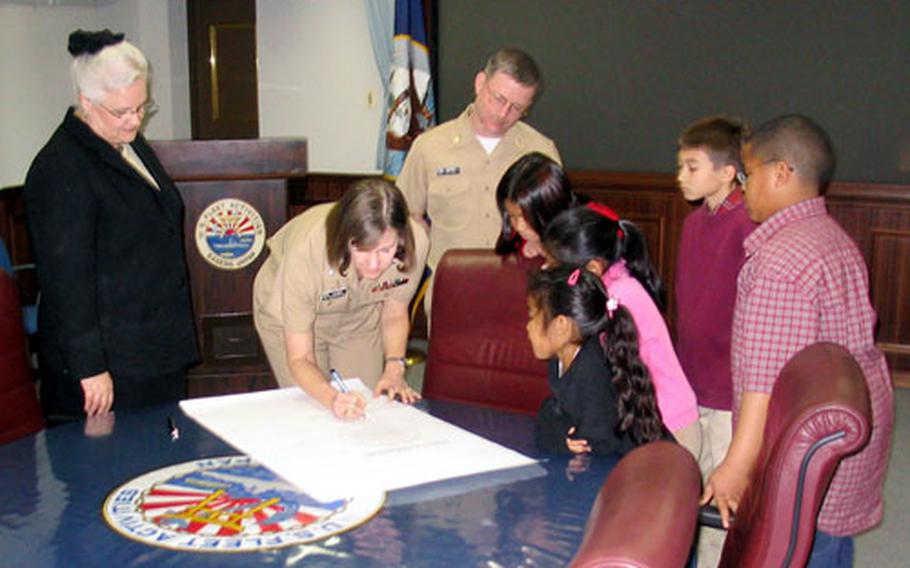 SASEBO NAVAL BASE, Japan &#8212; Sasebo Elementary School is going to be awash next month in colored fish, green eggs and cats in hats.

But forget Christmas: The Grinch already made off with it.

They are among the books that servicemembers and others plan to read to the school&#8217;s 300 students as part of Read Across America Month, school officials said.

Even servicemembers whose work prevents them from spending time at the school get to take part, said fourth-grade teacher Beth Martin: The school will videotape their readings.

Thursday, Cmdr. Elise Gordon, officer in charge of Sasebo Medical Clinic&#8217;s family practice, was videotaped reading &#8220;Harriet the Brave,&#8221; about the first woman to fly across the English channel.

It was an appropriate choice, Martin said, given Gordon&#8217;s background as a flight surgeon.

Martin said she also wrote a letter to first lady Laura Bush, asking her to read a story to her pupils on videotape, but she has not heard anything yet.

March 3 will be Dr. Seuss night at the school.

Volunteer readers will be on hand, as well as a Stars and Stripes representative to talk about newspapers, she said.

The students also will create a special birthday card for Dr. Seuss.

Martin said each pupil is asked to read books, aside from their regular textbooks, for at least 30 minutes a day in March.

If they reach their goals, the classes will be rewarded with a movie at the base theater.

Or at least leave you thinking about breakfast.

And which book has she enjoyed most?