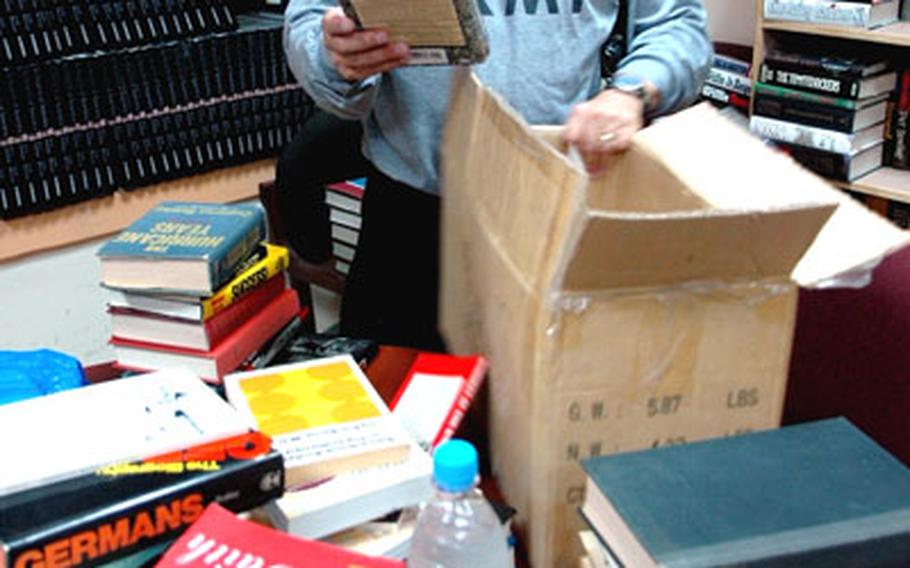 LOGISTICAL SUPPORT AREA ANACONDA, Iraq &#8212; Once upon a time, long, long ago, Iraqis boasted of their status as the world&#8217;s most avid readers with a proverb: Cairo writes, Beirut publishes and Baghdad reads.

But decades of dictatorship, censorship and the tyranny of Saddam Hussein&#8217;s not-so-subtle allegorical novels have starved the nation&#8217;s bookshelves of new, interesting, diverse ideas.

Through donations from members of the 65th and 71st Infantry Divisions, he&#8217;s put together a robust library of about 12,000 volumes at the Black Hawk education center. He hopes to begin turning over the collection to local leaders in nearby Balad later this month.

He said he originally had some apprehensions about the arrogance of offering English-language materials to native Arabic speakers. Those concerns, he said, were immediately dismissed by the Balad City Council.

The first donation will consist of medical texts for a local hospital, and National Geographic magazines and Reader&#8217;s Digest condensed books for the Balad city library.

In the future, McNerney hopes, the entire collection &#8212; minus the saucy romance novels and religious literature, which could be considered offensive to Muslim sensibilities &#8212; will find its way into Iraqi hands.

Until then, the collection serves as an informal lending library for troops stationed near Balad.

The library has gained a following among soldiers on base, said library patron and Blackhawk Education Center director Maj. Chris Jackson, a Missouri National Guardsman.

The shelves carry a wide array of titles. There are the downrange library standards: an entire shelf of dusty James Michener sagas, boxes filled with Harlequin romances (not on the shelves, so you have to ask), the usual rows of mysteries and self-help books of every type.

But there are surprises, too, in the robust literature section. The ponderous tomes of Italian writer/philosopher Umberto Eco sit among other heavyweights: Charles Dickens, F. Scott Fitzgerald, William Faulkner and ancient poets Homer and Virgil.

McNerney said he made no effort to tailor the library&#8217;s content.

And there are some oddballs in the bunch: an encyclopedia of spices, a pregnancy guide called &#8220;What to Eat When You&#8217;re Expecting,&#8221; several cookbooks and obscure, out-of-date magazines.

But McNerney said he hopes even the duds find a happy ending.

Lt. Col. Brian McNerney ranks the following books as his top-five must-reads for all U.S. soldiers.