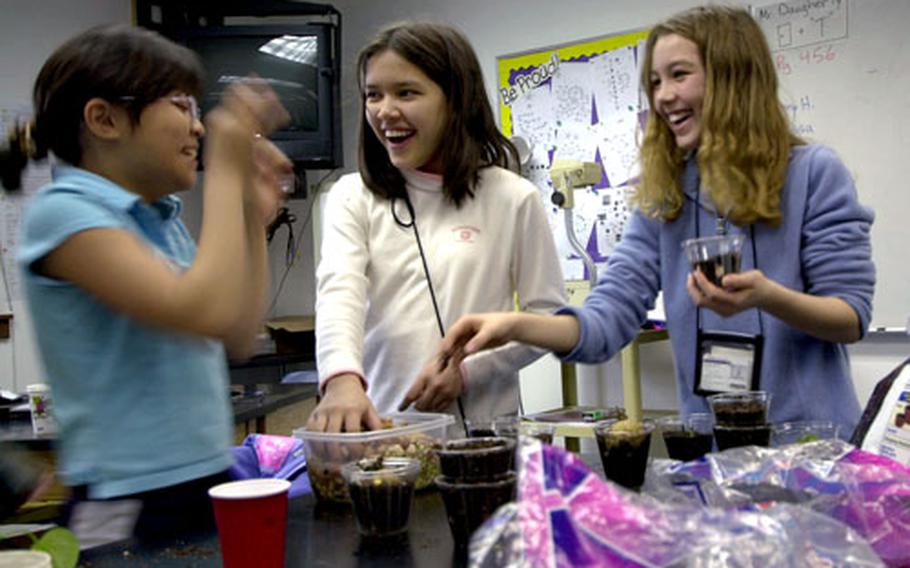 YONGSAN GARRISON, South Korea &#8212; Students and staff at Seoul American Middle School spent part of Friday doing things they normally don&#8217;t get to do at school.

One group of students took Principal Darrell Mood and other staff to the hoop during three-on-three basketball. Another bunch whipped up and ate a batch of the famous Korean kimchi &#8212; a spicy dish of fermented vegetables seasoned with pepper and garlic. Yet another group sang favorite karaoke hits.

They were enjoying Club Day, a program introduced this year at the school.

Phil Koprowski, seminar committee chairman, said the program offers more than 40 different activities to the 600 students at the school.

The faculty voted last year to introduce the concept. According to a staff memo from Mood, the school &#8220;has a continuing quest to teach the whole child; that is, to address both the cognitive and affective domains.&#8221;

He wrote that the new program is an &#8220;appropriate mid-level educational practice&#8221; that supports &#8220;our curriculum while enhancing our extensive extracurricular program.&#8221;

Koprowski said the staff decided what clubs to create.

The health and physical education teacher said that wasn&#8217;t a problem &#8212; the students were excited about Club Day.

Student council members staffed tables during a registration day earlier this year. The students went in order, oldest to youngest, and were told to have more than one choice because the clubs had limited spots and the most popular would fill quickly.

The clubs were as varied as the students and staff. They included skateboarding, balloon art and face painting, bicycling, a beauty club, visual journaling, cross-stitching, Scrabble, yoga, sign language, calligraphy, chess, volleyball, &#8220;Investing for Financial Freedom&#8221; and a percussion ensemble.

Koprowski said the clubs allow students who don&#8217;t necessarily know each other to meet &#8220;a new group of kids with similar interests.&#8221;

He joined Koprowski&#8217;s bicycle club but bad weather kept them indoors on Friday.

It&#8217;s not exactly studying &#8220;but you can still learn,&#8221; he said. Lee spent much of the session playing his guitar while fellow club members played board and card games and watched a video.

During the next session, she said, she&#8217;s thinking about joining the karaoke club.