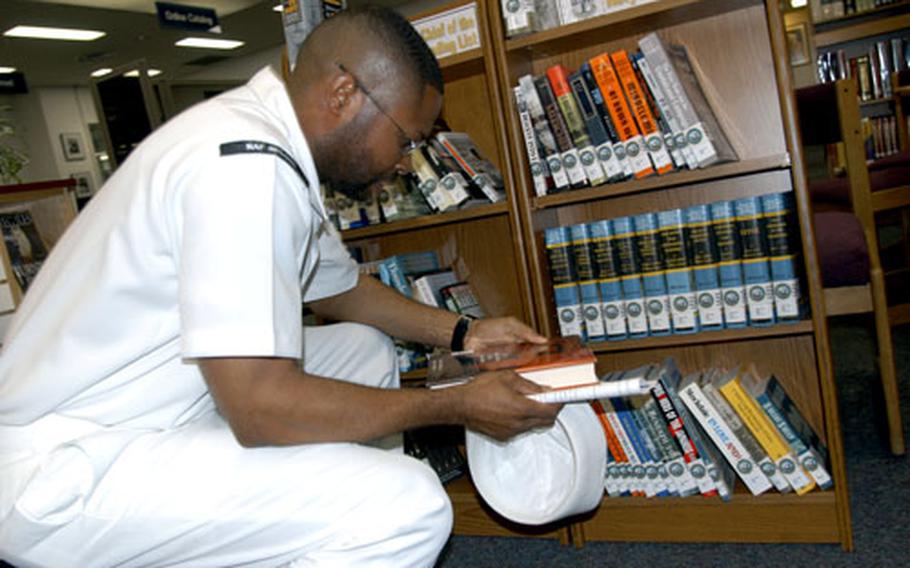 MISAWA AIR BASE, Japan &#8212; It just got easier and cheaper for sailors here to brush up on the Battle of Okinawa, learn about the life of former POW Adm. James Stockdale or get lost in a thriller about submarine warfare.

The Overstreet Memorial Library unveiled its latest collection Tuesday from the Master Chief of the Navy Reading List.

The books took about two months and $2,000 to procure, mainly through online booksellers, Thomas said, but the idea originated more than two years ago.

When Capt. Wayne Radloff, NAF Misawa commander, arrived at Misawa in 2003, he noticed the library carried the Chief Master Sergeant of the Air Force reading list &#8212; but not the Navy&#8217;s equivalent &#8212; and mentioned it to base leaders.

Anyone can sign out the books, but they&#8217;re recommended for enlisted sailors looking to advance their careers, Radloff said.

&#8220;If you want to understand your profession, if you want to get a better appreciation of our naval history &#8230; and the challenges we are facing, these are the books you should read,&#8221; he said.

Williams tests for first class petty officer in September and figures he might see some questions about the first Gulf War on the exam.

The Naval Air Facility and U.S. Naval Communications Detachment at Misawa bought the books and donated them to the library.

Here&#8217;s a sampling of books on the Master Chief of the Navy Reading List available at Misawa&#8217;s Overstreet Memorial Library: