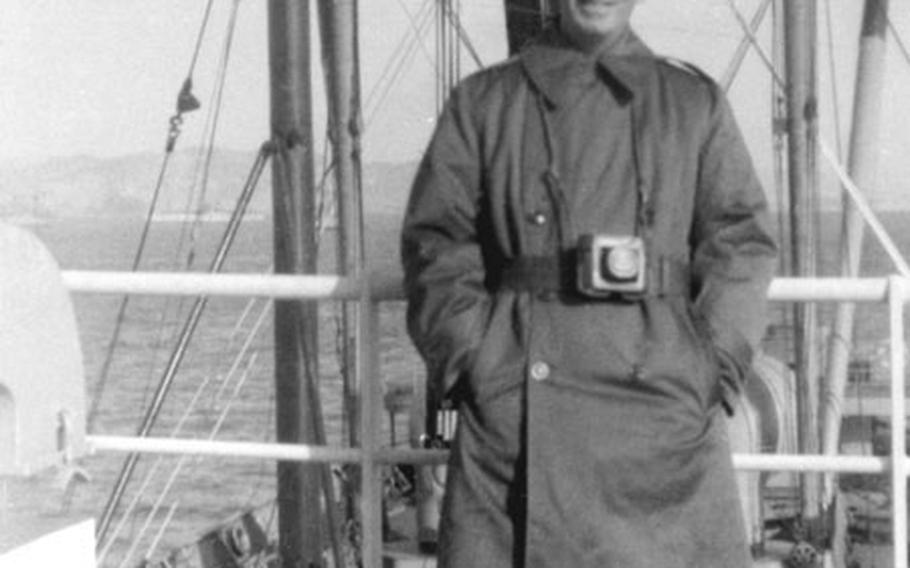 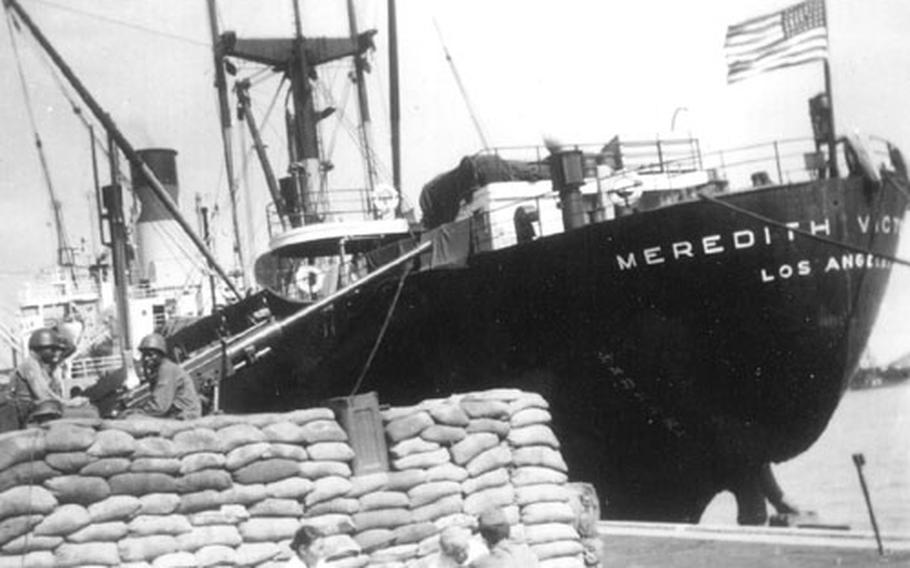 The SS Meredith Victory sits alongside the dock in Pusan. (Courtesy of Robert Lunney) 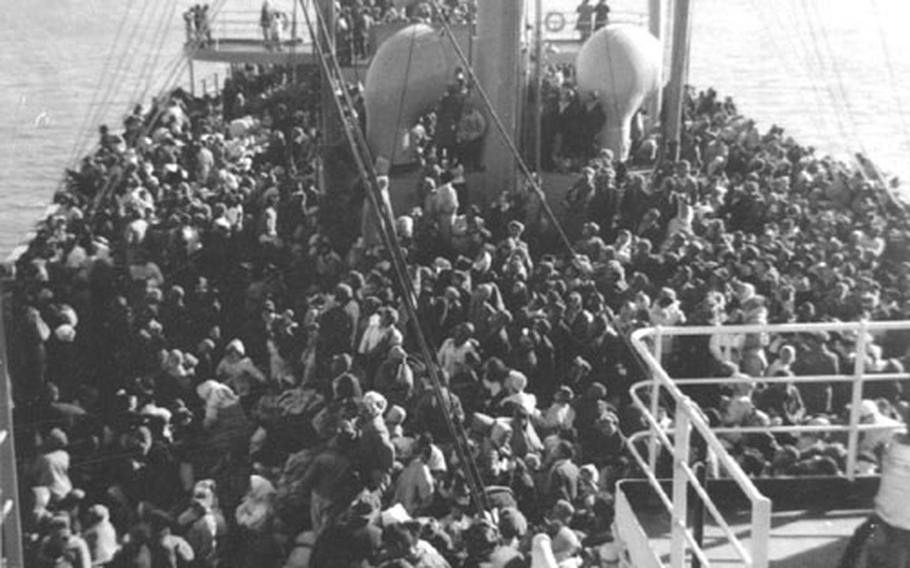 The aft deck of the SS Meredith Victory was packed with refugees when it left Hungnam, North Korea, in December 1950 for South Korea to escape encroaching Chinese and North Korean troops. (courtesy of Al Franzon)

SEOUL &#8212; It&#8217;s a little-known tale from the Korean War, hardly a footnote in most history books. But it&#8217;s a story that Benedict Ahn, a Korean translator, wants both Koreans and Americans to remember.

In December 1950, United Nations forces made a hasty withdrawal from upper North Korea as massive numbers of Chinese troops charged friendly forces in bitter cold temperatures. And as American troops from the 1st Marines and the Army&#8217;s 7th and 3rd infantry divisions pulled out at the North Korean port city of Hungnam, tens of thousands of refugees followed, hoping to get a ride on cargo ships.

It turned into one of the largest retreats and evacuations of civilians ever undertaken by the U.S. military.

&#8220;You can see humanitarian acts, humanitarian sacrifice, humanitarian love by the steamship crewmembers,&#8221; said Ahn, who translated &#8220;Ship of Miracles&#8221; into Korean. It&#8217;s an account by Bill Gilbert of the SS Meredith Victory, a cargo ship that carried 14,000 refugees away from the front lines and impending death.

Over the course of a few days, about 98,000 North Korean refugees &#8212; most carrying their meager possessions &#8212; were evacuated with other U.S. ships and taken south so communist forces would not kill them for allegedly collaborating with southern forces.

The Victory hauled military supplies as part of the Military Sea Transportation Service, taking orders from the U.S. Navy. It was built during World War II, one of hundreds of ships that formed a supply backbone for the war.

Robert Lunney was a staff officer aboard the Victory, an administrative aid to Capt. Leonard LaRue. He was just 22 but a veteran of the Pacific theater in World War II. LaRue was a quiet, contemplative leader who took his orders and carried them out, Lunney said from his home in Bronxville, N.Y.

So when four or five Army colonels boarded his ship at Hungnam and asked if he would take on thousands of ragged refuges, LaRue said he&#8217;d take as many as he could.

&#8220;As far as we could see, there was a mass of humanity on the beach,&#8221; Lunney, now 75, said in a telephone interview. &#8220;The poor people were being threatened with annihilation. Many of them were being wiped out in the village because they were accused of cooperation with the U.N. forces, especially the Americans. They were fleeing for their lives.&#8221;

The Victory&#8217;s crew thought they would be evacuating remaining U.S. forces. A few days earlier, Lunney said, the Victory abandoned a plan to take fuel to a Marine airfield close to Hungnam after North Korean and Chinese forces closed in.

When they arrived at Hungnam the second time, they were still carrying 300,000 tons of jet fuel in the Victory&#8217;s lower compartments. On shore, Lunney said, he could see enemy troops slowly closing the noose around the port, a thin perimeter being held by artillery fusillades led by the USS Missouri, eight destroyers and support from two or three carriers from the 7th Fleet.

The steel plating on the Victory&#8217;s deck vibrated from the heavy shelling, Lunney said. The refugees clamored aboard, some carrying their few remaining possessions &#8212; a violin, a sewing machine &#8212; and children. They crowded the upper decks and lower cargo holds devoid of light, heat and bathrooms.

Chong Jong-won, 29 at the time, was on the Victory&#8217;s upper deck, exposed to the cold Korean winter. She and her 3-year-old son had left their hometown of Songjin, a coastal city north of Hungnam, after communist forces approached.

Three days later, when the ship reached Pusan, the port turned them away because there already were too many refugees, Lunney said. The ship stopped instead at Koje Island off the southeast coast and offloaded the refugees.

The ship reeked of human waste. And it had even more passengers than when it departed: Five babies were born during the journey. Miraculously, no one died.

Ahn&#8217;s book translation came from his desire to educate younger Koreans about the Victory. In light of anti-Americanism on the Korean Peninsula, he felt it was his mission to educate both Koreans and Americans about the ship&#8217;s evacuation and how the world community saved South Korea from communism.

Lunney is humble about the Victory&#8217;s achievements but has been recognized by both the U.S. and South Korean governments. The crew did its job, and there wasn&#8217;t much thought given to the action until later, he said.