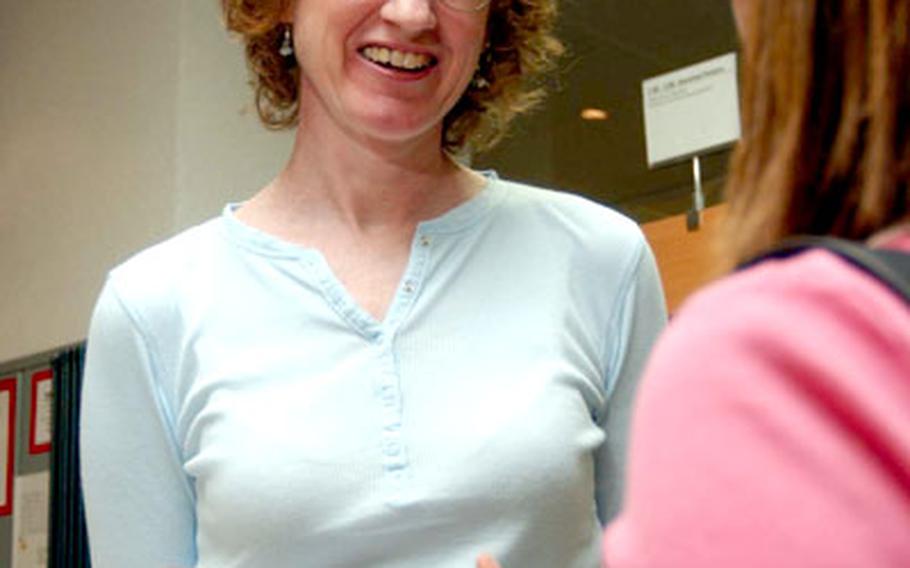 Kristin Henderson, left, author and military spouse, talks to Cary Bermea, who has been married to a soldier for 13 years, at the Army and Air Force Exchange Service at Ramstein Air Base, Germany. (Christine June / Courtesy of U.S. Army)

Ask any fatigued woman dragging her small children through a crowded commissary on foreign soil, or a wife who spends the night worrying about her husband who&#8217;s deployed to a hostile land. Or a husband doing the same thing while his wife serves her country.

Is being a military spouse hard?

It&#8217;s something that most Americans never experience: They don&#8217;t know the visceral ache of watching a loved one go off to a combat zone.

To remind Americans of the sacrifices of the wives and husbands who stay behind, journalist and military spouse Kristin Henderson wrote &#8220;While They&#8217;re at War: The True Story of American Families on the Homefront.&#8221;

And all this month, Henderson is visiting American military communities in Germany to talk about her book and the shared experience of the spouses. She&#8217;ll also lead discussions and sign copies.

Henderson, who has appeared on &#8220;The Today Show&#8221; and National Public Radio, will be speaking from 4 to 6 p.m. Friday at the Bookmark shop in Garmisch. From 10 a.m. to noon on Tuesday, she will appear at the Patrick Henry Village Shoppette in Heidelberg. On May 19, Henderson will be at the Mannheim Bookmark from 4 to 6 p.m., followed by an appearance at the Heidelberg Shopping Center from noon to 2 p.m. on May 20.

From there she goes to the Bookmark in Darmstadt from 3:30 to 5:30 p.m. Henderson wraps up her tour May 20 with a book signing at the Bookmark in Stuttgart from noon to 2 p.m.

The book focuses on the lives of two women who work to cope with their husbands&#8217; first deployments, according to Henderson&#8217;s publisher, the Houghton Mifflin Co.

Henderson herself is married to a Navy chaplain.

&#8220;The homefront gets a lot less screen time &#8212; the camera swings around to focus on military families just long enough to peek through the window at the tearful goodbye and the joyful homecoming and, in between, the occasional yellow-ribbon moment,&#8221; Henderson writes in the book. &#8220;The rest of the homefront experience is hidden behind a closed door.&#8221;

For more information on Henderson&#8217;s touring schedule, log on to www.kristinhenderson.com/calendar.htm.