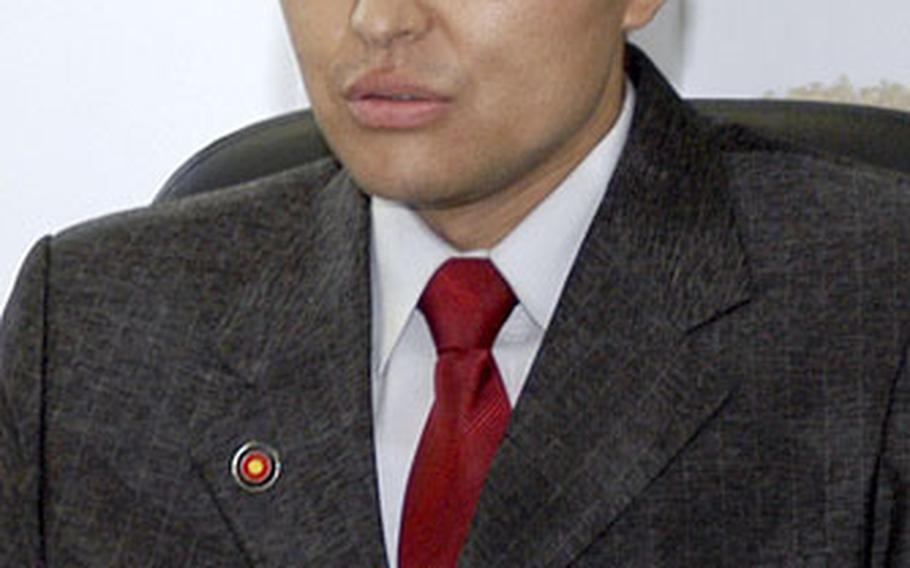 Artur Jeenaliev, a lieutenant colonel with the Krygyzstan Border Guard, who was stricken with cancer while a student at the Marshall Center, is recovering following a bone-marrow transplant. (Joe Ferrare / Marshall Center)

A Marshall Center student who was found in February to have acute cancer is scheduled to fly home to Kyrgyzstan after becoming stable following a bone-marrow transplant.

Artur Jeenaliev, 32, a lieutentant colonel with the Kyrgyzstan Border Guard, was studying at the Garmisch, Germany, school when he became sick and was diagnosed with acute myeloid leukemia, a fast-moving blood cancer.

After treatment at hospitals in Munich and Berlin, which was paid for by a German foundation, Jeenaliev is going to be able to use his original return-flight ticket to go home on Sept. 18.

&#8220;Before I was a workaholic, and work was the most important thing for me,&#8221; Jeenaliev said by telephone from Garmisch through an interpreter. &#8220;I was working long hours every day and not really spending a lot of time taking care of myself or spending time with my family.

Jeenaliev&#8217;s sister, Anara, was found to have matching bone marrow, and private donors flew her and Jeenaliev&#8217;s wife, Natalia, from Kyrgyzstan to be with him during his hospital stays.

&#8220;I am extremely satisfied and amazed and hopeful by the treatment that was provided by the medical staffs,&#8221; Jeenaliev said, referring to the Klinikum Grosshadern in Munich and Charite Hospital, Benjamin Franklin Campus, in Berlin.

Jeenaliev, of Osh, Kyrgyzstan, said that he hoped, if physically able, to resume his Border Guard duties of tracking down smugglers and extremists. Kyrgyzstan is located amid other former Soviet states clustered along China&#8217;s western border.

The George C. Marshall European Center for Security Studies is operated by the U.S. and German defense departments. Its mission is to help nations of the former Soviet Union become more stable.

The center hosts classes taught to military and civilian students, such as Jeenaliev, who come from former Soviet-bloc nations.