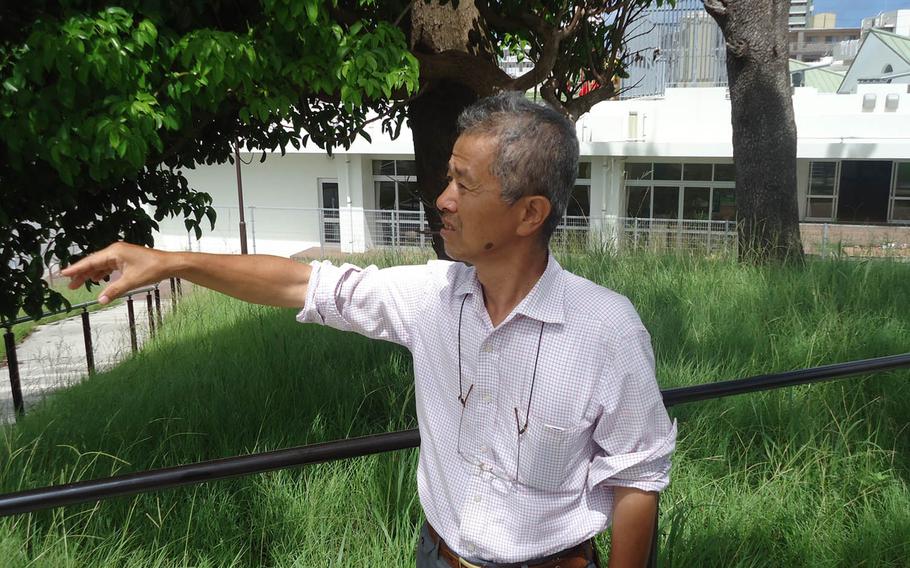 Takamatsu Gushiken stands on the only piece of Half Moon Hill in the Makabi section of Naha that remains undeveloped. The hill was the scene of heavy fighting 70 years ago during World War II's Battle of Okinawa. Gushiken is the founder of Gamafuya, a nonprofit dedicated to the recovery of the remains of Okinawa war dead. (Matthew M. Burke/Stars and Stripes)

Takamatsu Gushiken stands on the only piece of Half Moon Hill in the Makabi section of Naha that remains undeveloped. The hill was the scene of heavy fighting 70 years ago during World War II's Battle of Okinawa. Gushiken is the founder of Gamafuya, a nonprofit dedicated to the recovery of the remains of Okinawa war dead. (Matthew M. Burke/Stars and Stripes) 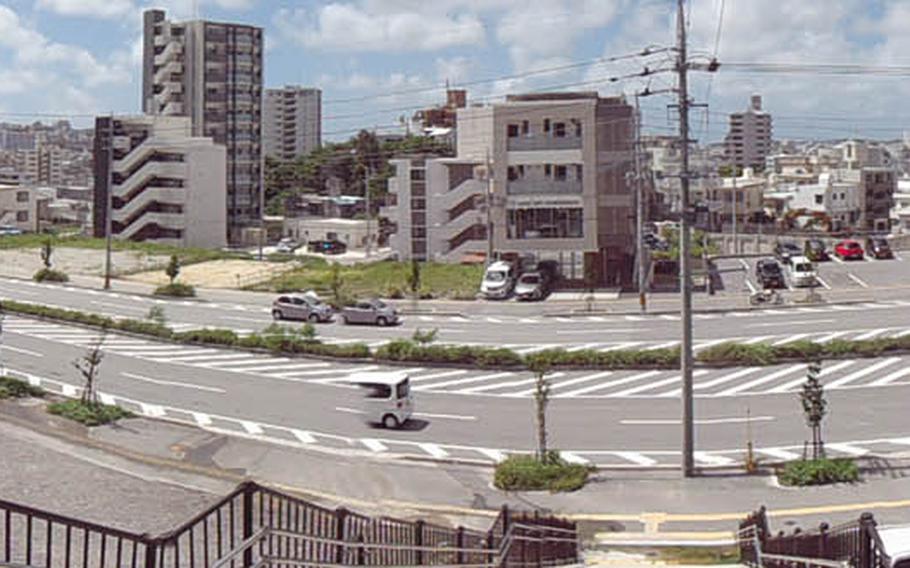 Takamatsu Gushiken poses overlooking the area surrounding Half Moon Hill in the Makabi section of Naha, Japan. The hill was the scene of heavy fighting 70 years ago during World War II's Battle of Okinawa. Modern Okinawa was built on top of and around unclaimed war dead from the fight. Gushiken and Gamafuya, his nonprofit dedicated to the recovery of the remains, recovered over 170 sets of remains on Half Moon Hill when they performed a recovery operation several years ago. Gushiken continues to advocate for the forgotten war dead to this day. (Matthew M. Burke/Stars and Stripes) 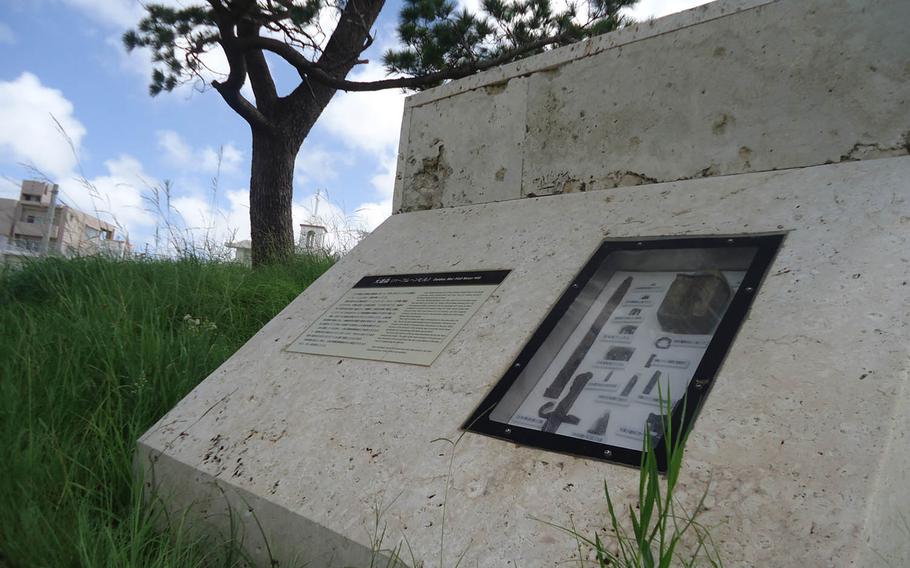 A small marker sits on the only undeveloped piece of Half Moon Hill in the Makabi section of Naha, Japan. The marker features a bullet hole from the World War II's Battle of Okinawa in the upper left hand corner and artifacts found on the site. The nonprofit Gamafuya performed recovery work on the site prior to its development and recovered over 170 sets of remains. (Matthew M. Burke/Stars and Stripes) Okinawa's bone collector, Takamatsu Gushiken, says the key to recovering remains is found in rare undeveloped parcels such as this one, just off the main road near Half Moon Hill in the Makabi section of Naha, Japan. The Japanese government needs a landowner's permission to look for remains, so many sit where they fell 70 years ago. Property values decrease when remains are found, so many landowners do not report them. (Matthew M. Burke/Stars and Stripes) 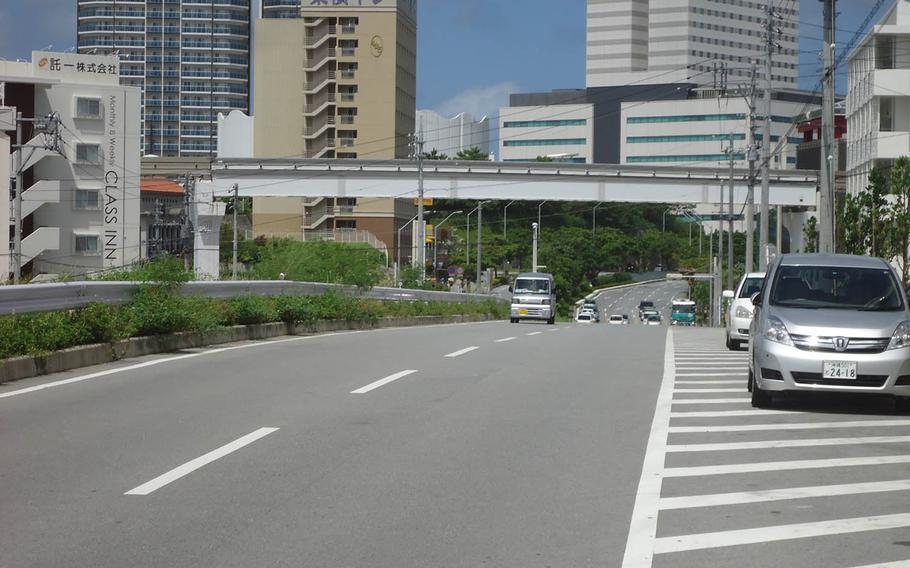 The spot where Takamatsu Gushiken claims to have recovered the shin bone of an American servicemember killed in the Battle of Okinawa during World War II. Today, there are over 900 Americans still missing from the battle, according to the Defense POW/MIA Accounting Agency. (Matthew M. Burke/Stars and Stripes) 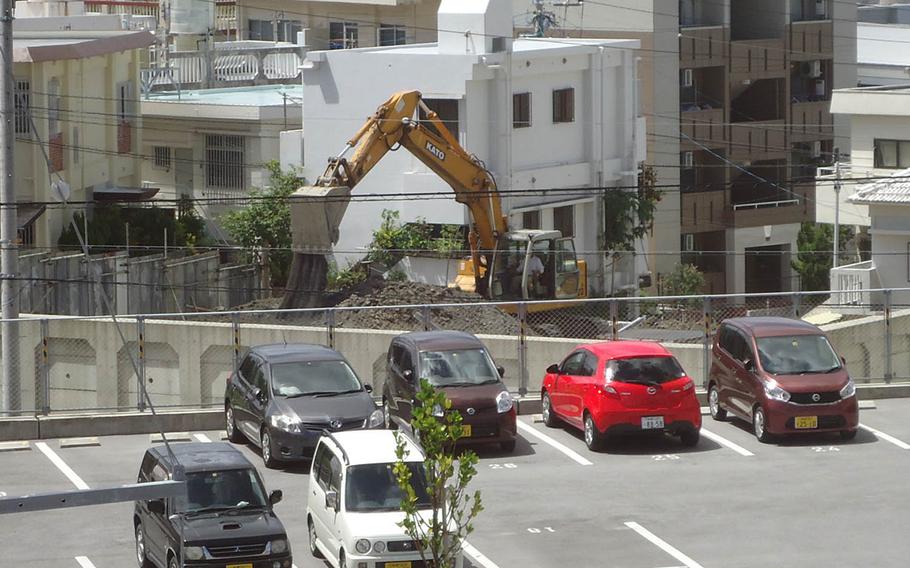 You can't stop progress: A construction crew digs up a parcel just off Half Moon Hill in the Makabi section of Naha, Japan, in August. It is up to the landowners to report war remains and allow their collection. (Matthew M. Burke/Stars and Stripes) 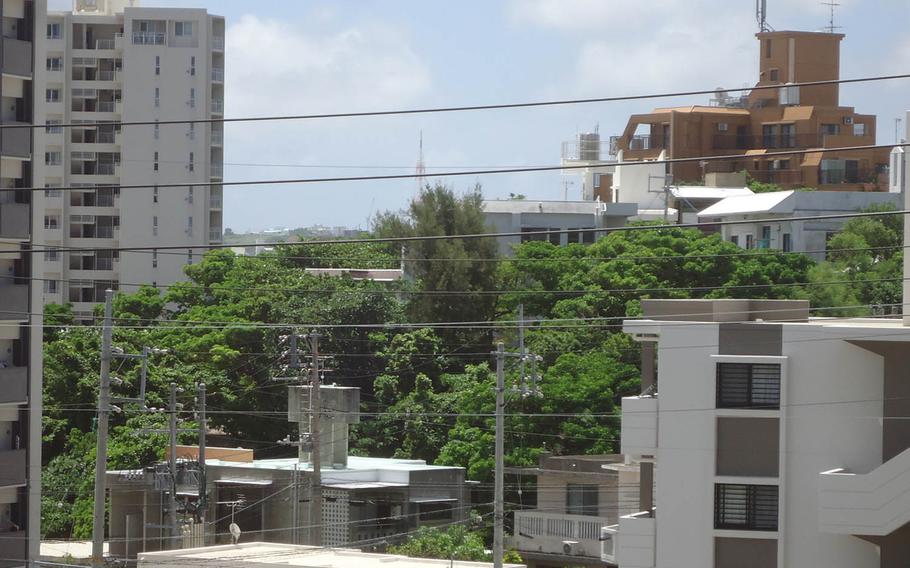 The wooded area near Half Moon Hill where the remains of Japanese soldier, still wearing his helmet, sits today. (Matthew M. Burke/Stars and Stripes) 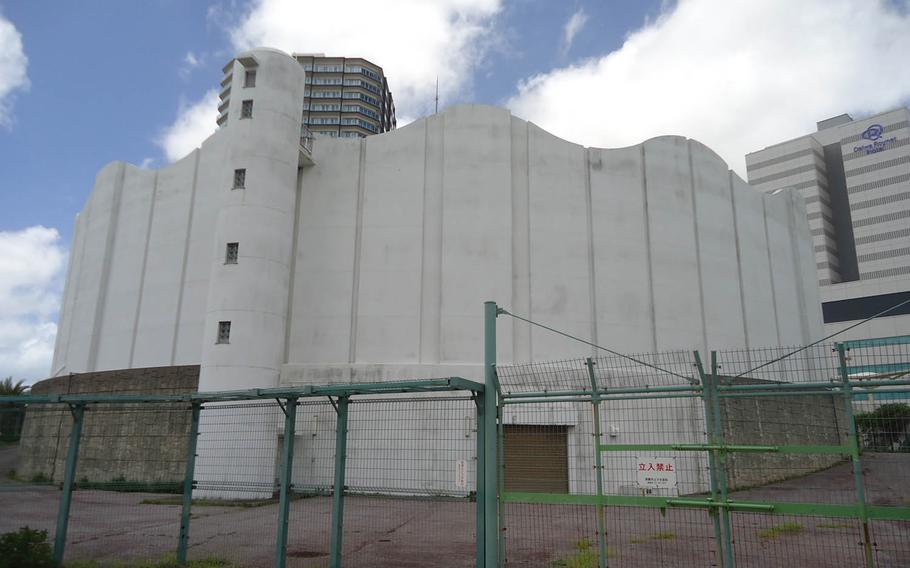 The water containment facility atop Sugar Loaf Hill, which was the scene of heavy fighting during World War II's Battle of Okinawa in Japan. Remains at the site, never collected, were bulldozed with the dirt to fill low-lying areas. (Matthew M. Burke/Stars and Stripes) 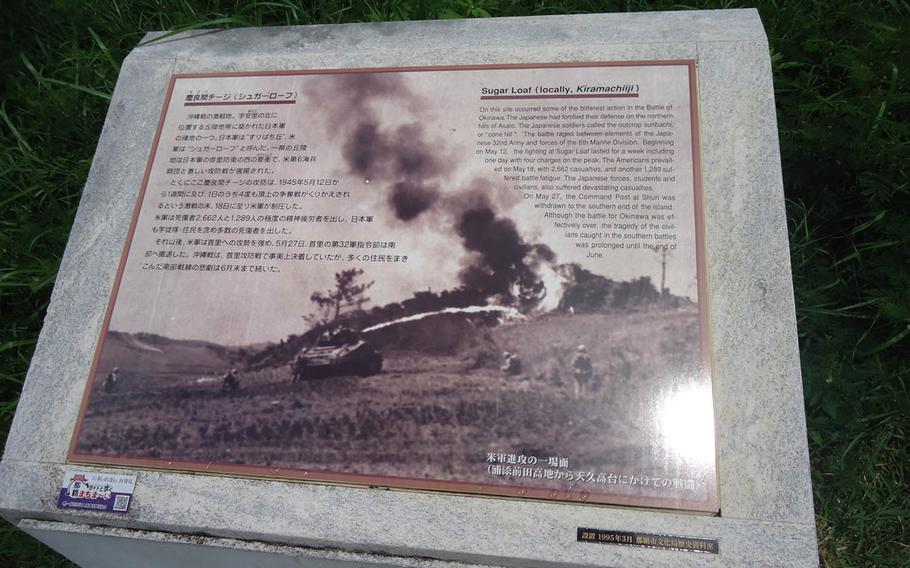 A small marker sits atop Sugar Loaf Hill, offering a glimpse into the horrors the hill knew during World War II's Battle of Okinawa. Remains on the hill, never collected, were bulldozed with dirt to fill low-lying areas. (Matthew M. Burke/Stars and Stripes)

As dental-equipment repairman Takamatsu Gushiken, 61, walked through the Makabi section of the prefecture’s capital, Naha, on a sunny August day, he pointed to an overgrown, undeveloped parcel of land between a major road and several homes. In the undergrowth lay the undisturbed skeleton of a Japanese soldier, still wearing his battle helmet, he said. Gushiken and his friends used to see it while playing in the area.

He then pointed to a slight slope in the road where in 2009 he uncovered a large shin bone he believes belongs to an American servicemember killed during the fight for Half Moon Hill. The bone is now housed in a temporary enshrinement facility at Peace Memorial Park in the city of Itoman.

Gushiken is Okinawa’s bone collector and the founder of Gamafuya, a nonprofit dedicated to recovering the remains of Okinawa’s war dead. For the past 20 years, his group of volunteers has advocated for the search and recovery of remains on the tiny island prefecture — and has performed most of the recovery work themselves.

The infamous, 82-day Battle of Okinawa claimed 12,520 American servicemembers, 110,000 Japanese troops and 140,000 Okinawan civilians. As of the end of March, 185,121 sets of remains had been found, local officials said. Among the tens of thousands still missing are “over 900” Americans, a spokesman for the Defense POW/MIA Accounting Agency said.

Gamafuya has conducted more than 300 recoveries, which likely included Americans, but only four have been returned to their families, officials said, and that number isn’t likely to rise much. Until recently, remains that were not easily identifiable were cremated and interred in Itoman.

Growing up near infamous battle sites such as Half Moon and Sugar Loaf hills, Gushiken said he and his friends could point out skulls “here and there.” The experience stayed with him.

About 20 years ago, he learned of urban development plans and asked the city to recover the remains, but his request was ignored, he said.

Sugar Loaf Hill was bulldozed flat to make room for military housing and, later, a water containment facility. The fill was pushed into a low-lying central part of the former military family housing site, now called Shintoshin, or New Urban Center, said Akira Takamine, who served as director of Naha’s urban planning division during that time.

“Once the development started, thick, iron walls enclosed the area, and there was no way for me to get in there to collect remains,” Gushiken said.

Later, he heard from construction workers that many sets of remains were found.

“They were mixed with dirt and taken to a landfill,” he said. “To this day, I still regret that I could not save them.”

Gushiken vowed he would not let the same thing happen when it came time to develop Half Moon Hill. News of an impending project reached him in 2007.

Naha’s government did not want to collect remains, and landowners were reluctant to approve a dig because they did not want to see their property values fall, Gushiken said. So he chose a different strategy. He went to a site where he had seen remains, unearthed them and called the media.

He was soon contacted by the city government, which told him there was no money to recover the remains. However, officials agreed to let Gushiken perform the recovery, and Gamafuya was born.

“Remains were found one after another,” he said. “Development was encroaching day by day.”

In 2009, Gushiken successfully negotiated with Japan’s Ministry of Health, Labor and Welfare to make the recovery work an emergency job-creation project for the homeless. A total of 172 sets of remains was recovered.

This led Gushiken to his next challenge: identification. He urged both the central and prefectural governments to stop cremating the remains and to conduct DNA testing. It wasn’t until 2014 that the Okinawa prefectural assembly called for preservation of war remains.

In May, the Tokyo government announced it would create a DNA database to include 600 sets of remains on Okinawa among thousands of others collected around the globe. Officials said it would be up and running sometime next year.

However, like with American efforts, families will see testing only when there is a presumptive identification, local officials said.

Gushiken called on the U.S. government to formally file a request with the Japanese to conduct a joint search for war dead. He said remains are still there to be found.

“While growing up in this environment and surroundings, I began to think what would I want most if I were them,” he said, choking up with emotion. “The last word uttered by most of those who were killed on the battlefield was ‘Mom’ or ‘Mother.’ They all wanted to go home to their mothers. It is the responsibility of us who live today to make every effort to bring them home.”