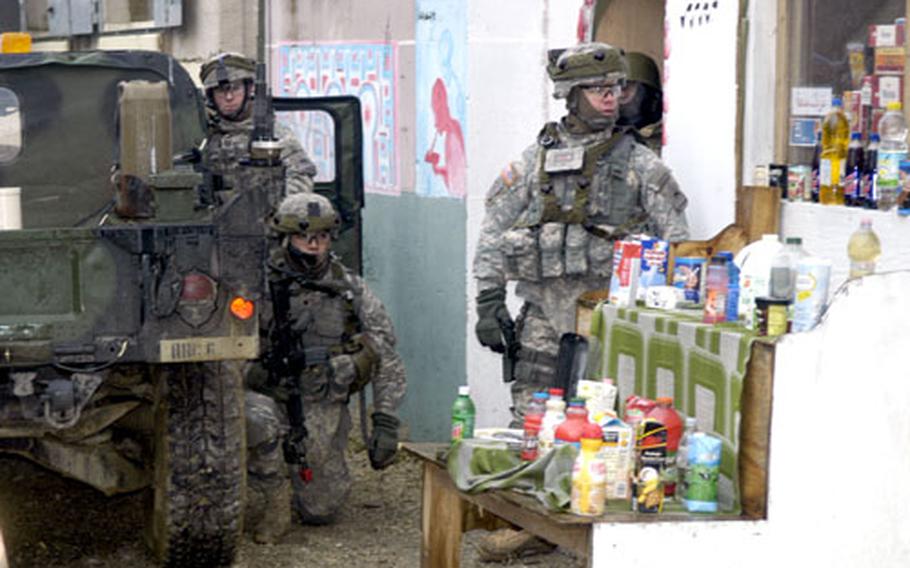 Soldiers from the 2nd Battalion, 6th Infantry stand guard outside a building where commanders from the 2nd Brigade 1st Armored Division are meeting with mock provincial Iraqi leaders during a mission aimed at preparing the brigade for its upcoming deployment. (John Vandiver / S&S)

Soldiers from the 2nd Battalion, 6th Infantry stand guard outside a building where commanders from the 2nd Brigade 1st Armored Division are meeting with mock provincial Iraqi leaders during a mission aimed at preparing the brigade for its upcoming deployment. (John Vandiver / S&S) 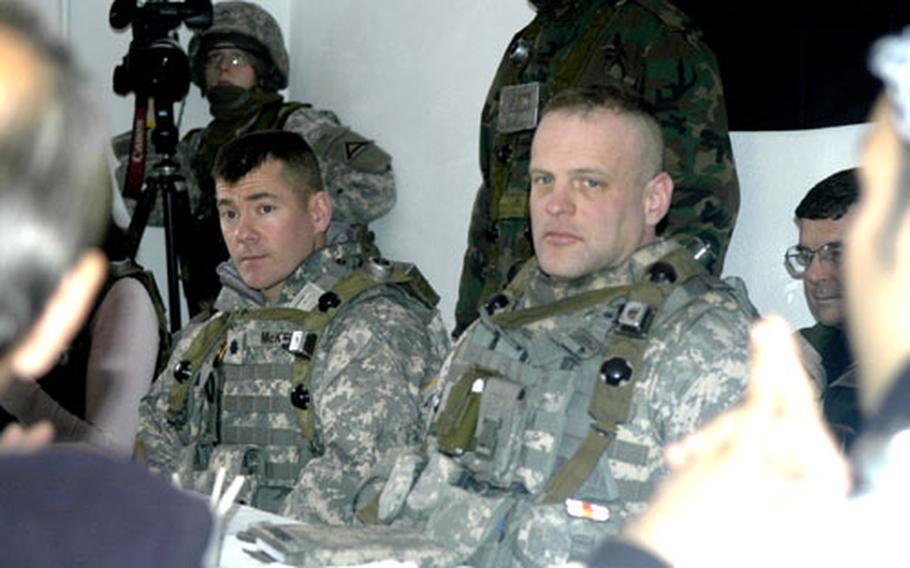 Lt. Col. Matthew McKenna, left, and Lt. Col. Michael Shrout of the 2nd Brigade, 1st Armored Division, listen to Iraqi provincial government and tribal leaders during a training exercise in Hohenfels, Germany. The actors are prohibited from being photographed, in part, because some still have ties to the Iraq region. Monitors from the Joint Multinational Readiness Center observe and later critique the performance of the commanders and soldiers in the exercise. (John Vandiver / S&S)

HOHENFELS, Germany &#8212; Inside the heavily guarded building, the provincial leaders squabbled like a divisive city council.

&#8220;Brothers, please keep silent. Everyone will get his time,&#8221; said Omar Yassin, playing the role of a Salah Ad Din province deputy governor.

But the various leaders, speaking through their interpreter, spouted off from all corners. They battled with each other and questioned a group of commanders from the 2nd Brigade, 1st Armored Division about the limitations of help to be offered.

The council of leaders wanted to know: Could the commanders apply some pressure and get the province a better shake from the central government?

At the Joint Multinational Readiness Center in Hohenfels, the 2nd Brigade Combat Team continued to be tested Tuesday as it prepares for its deployment to Iraq in early 2008.

The mission rehearsal exercise commenced in mid-October and has been steadily picking up speed. While the cultural and political savvy of the commanders was tested Tuesday inside the provincial council meeting set in Hohenfels&#8217; make-believe &#8220;Samarra,&#8221; the security skills of 2nd Battalion, 6th Infantry soldiers were challenged outside.

The soldiers searched buildings, hunting for insurgents and explosives as they sought to secure the area while the discussions unfolded inside.

About 200 soldiers were involved in Tuesday&#8217;s mission, and they had a little bit of everything thrown their way. Roadside bomb detonations, rocket-propelled grenade ambushes and a suicide bomber were among the challenges. The result: two soldiers &#8220;killed&#8221; and two more &#8220;injured&#8221; during Tuesday missions.

The skill the new soldiers need to develop, he said, is their &#8220;tactical situational awareness.&#8221;

The training is the first step in building that battlefield common sense, he said.

But the soldiers weren&#8217;t the only ones challenged.

The sheiks, angry with one another, disagreed about how a proposed provincial budget was being allocated. Then there were sewer systems in need of improvement, electricity to be restored, more jobs needed for residents. And there was the most pressing concern: insufficient security.

It was a lot of business for one meeting.

The commanders, cautious in what they could commit to, offered empathy and the promise of partnership.

McKenna finally told the leaders that with greater security there will be more Iraqi police recruits and more economic development. But to achieve the goal, U.S. forces need to know when terrorists are in their midst, he said. The sheiks need to be partners.

The meeting ended with handshakes, friendly words and assurances of cooperation. The convoy of commanders then departed.

Moments later, a suicide bomber blew himself up near the scene of the meeting, &#8220;injuring&#8221; two U.S. soldiers and six from the Iraqi army.

The soldiers worked to secure the area late into the night.