Bombers come to Europe as tensions simmer over Ukraine 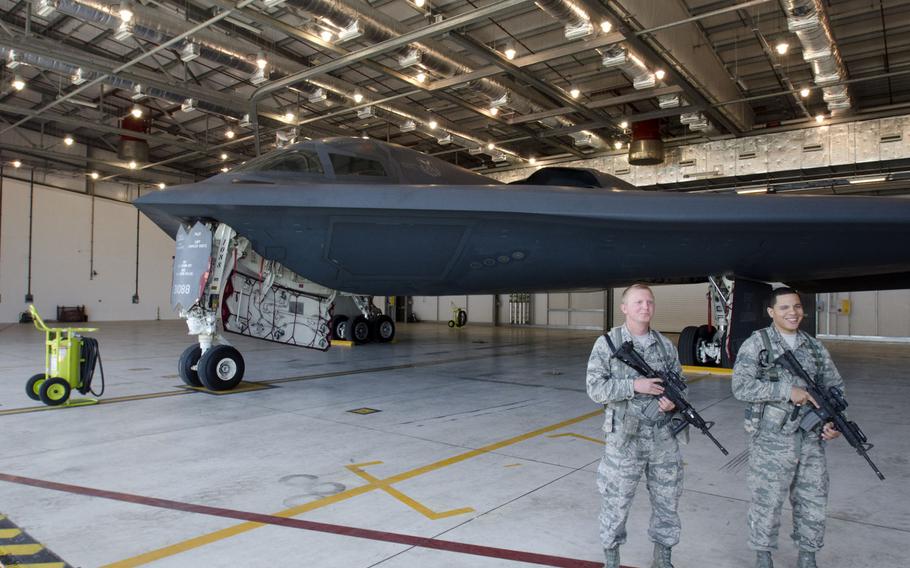 Air Force guards pose for pictures in front of one of two B-2 Spirits at RAF Fairford, England, on Tuesday, June 10, 2014. The Spirits were deployed to Fairford to help familiarize their crews with flying in the area. (Adam L. Mathis/Stars and Stripes)

Air Force guards pose for pictures in front of one of two B-2 Spirits at RAF Fairford, England, on Tuesday, June 10, 2014. The Spirits were deployed to Fairford to help familiarize their crews with flying in the area. (Adam L. Mathis/Stars and Stripes) 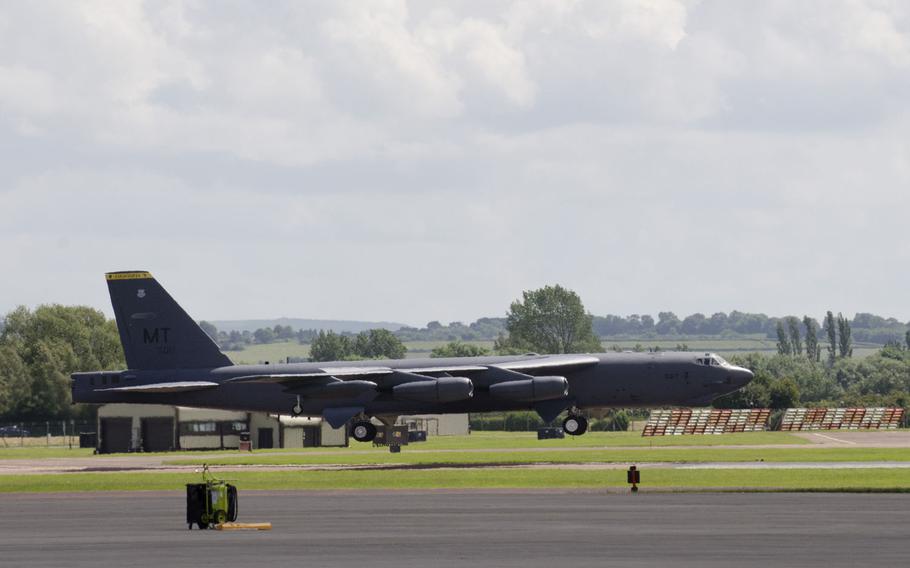 A B-52 Stratofortress lands at RAF Fairford, England, on Tuesday, June 10, 2014. The B-52 arrived in England last week followed shortly by two B-2 Spirits. (Adam L. Mathis/Stars and Stripes) 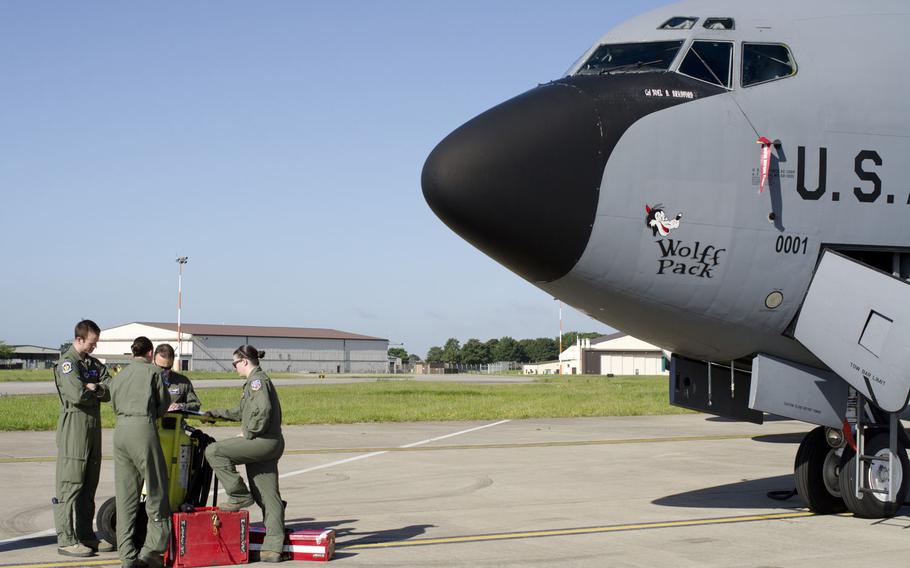 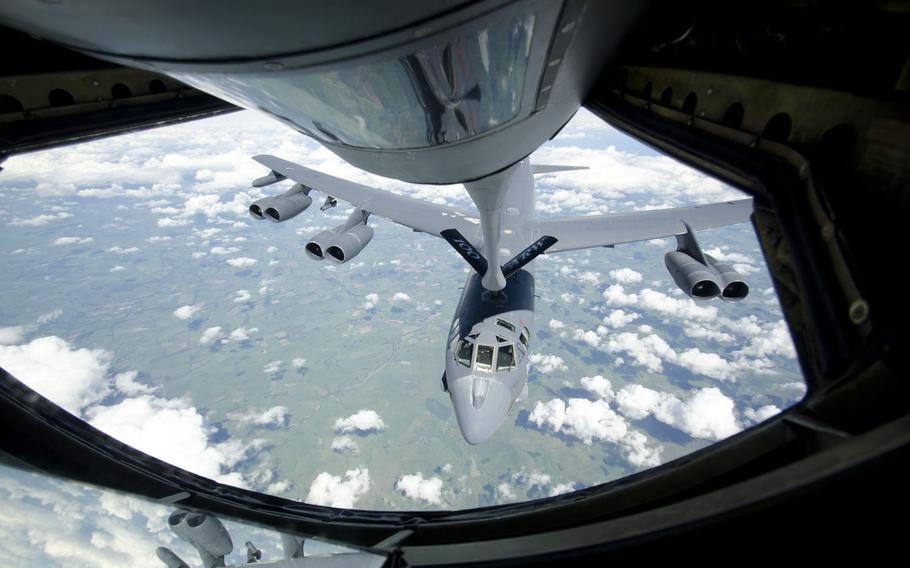 A B-52 Stratofortress refuels through the boom of a KC-135 Stratotanker over Britain on Wednesday, June 11, 2014. The Stratofortress is in Britain to help familiarize the bomber's aircrew with flying in Europe. (Adam L. Mathis/Stars and Stripes) 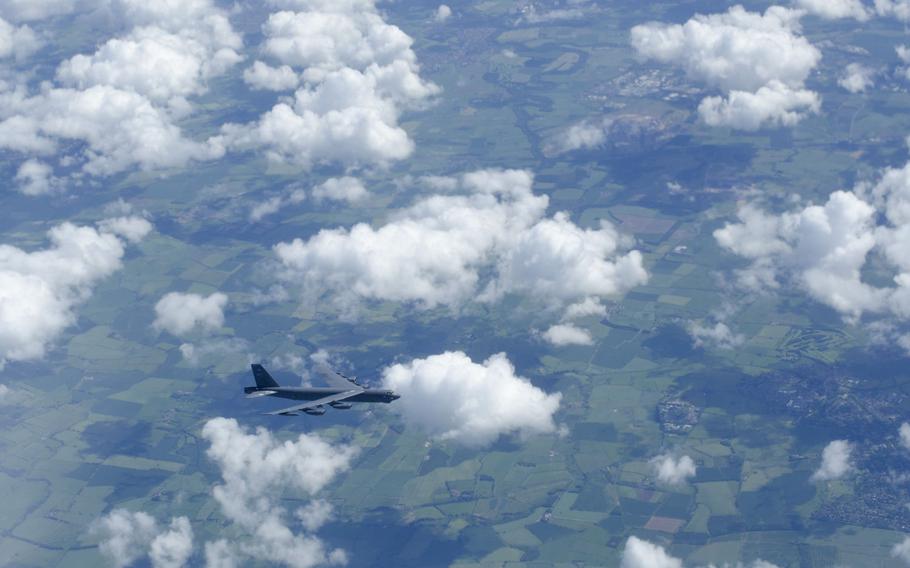 A B-52 Stratofortress flies near a KC-135 Stratotanker from RAF Mildenhall, England, on Wednesday, June 10, 2014. The B-52 is one of three deployed to RAF Fairford. (Adam L. Mathis/Stars and Stripes)

A KC-135 Stratotanker took off from RAF Mildenhall, England, on Wednesday morning for a mission reminiscent of the Cold War — refueling long-range, nuclear-capable U.S. bombers flying over Europe.

Three B-52 Stratofortresses and two B-2 Spirits, commonly known as Stealth Bombers, arrived on June 4 and 8, respectively, at RAF Fairford, England, from the United States. Officials have described their short deployments to Europe, which came amid increasing tensions over the crisis in Ukraine and Russia’s takeover of Crimea, as routine and focused on training. Both sets of planes are unarmed, and the training exercise was scheduled last year.

Fairford is a historic base for U.S. bombers, which hosted B-52s on their way to Iraq more than a decade ago. But the most recent use of the base by U.S. bombers for training was in 2008, an Air Force spokesman said.

The U.S. and NATO have been deploying additional troops, ships and aircraft to eastern Europe to reassure alliance partners concerned about Russia’s intentions since Moscow annexed Ukraine’s Crimea Peninsula and moved troops close to Ukraine’s border. Moscow has denounced the buildup, saying it represents a security threat to its own borders.

Speaking at a media event on Tuesday at Fairford, Col. Leland Bohannon, commander of the expeditionary group, said he was unable to comment about any political messages the deployment may or may not be intended to send. However, using the movement of bombers in Korea as an example, he noted bomber deployments can be a way for the U.S. to communicate to nations.

“What does it communicate?” Bohannon said. “It communicates commitment to that particular region … and we’re not going to walk away.”

Meanwhile, U.S. forces are participating in two military exercises in the Baltic. BALTOPS-2014 is a naval exercise involving the U.S. 6th Fleet flagship, and Sabre Strike-14 is an air and ground exercise involving about 4,500 international troops training in Lithuania, Estonia and Latvia.

The two exercises have prompted a simultaneous military exercise in the Baltic region by the Russian military.

What officials have released of the bombers’ training does not put them near Russia or Ukraine. A long-range B-2 training exercise was conducted, but officials would say only that it flew in the international airspace of the areas of responsibility of the U.S. European Command the U.S. African Command.

The bombers have also flown with British pilots and are scheduled to do so again.

Officials have described the bomber training for both B-52 and B-2 crews as an opportunity to familiarize themselves with flying in Europe.

“That’s why we bring all these specialists out here, and we try to bring as many as we can so they can familiarize themselves with this location so that in the event we come back, it is a much easier smoother process, said Maj. Dale Wilds, a B-2 pilot deployed to Fairford. “There have been lessons learned that we can take home ... to be a more efficient deployable package.”