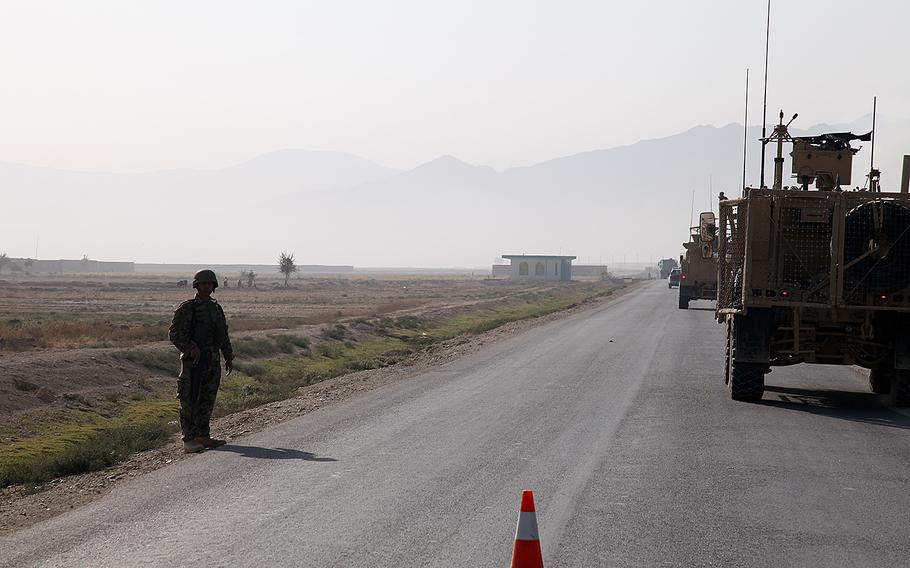 “We can confirm that one coalition vehicle was struck by an (improvised explosive device) this morning in the vicinity of Bagram,” Air Force Capt. Andrea Dykes, a spokeswoman for the NATO mission, said in a statement. “Despite Taliban claims and reports in the media, there were no injuries to coalition personnel involved.”

On Twitter, the Taliban claimed responsibility for the attack, with one Taliban-affiliated account claiming dozens of U.S. troops were killed or injured. Another account linked the attack to the Taliban’s spring offensive and claimed several armored personnel carriers had been destroyed.

The Taliban frequently exaggerate the results of their attacks.

Elsewhere, in the Uruzgan province, six policemen were killed when three of their colleagues turned their guns on them at a police checkpoint early Saturday morning, Mohammad Hashim Akmal, local police commander in Charchino district told Stars and Stripes.

The attackers fled with weapons and ammunition to join the Taliban, he said.

While the number of insider attacks has dropped sharply in the past two years, there has been an uptick in recent weeks, with 10 policemen killed in two separate attacks earlier this week in Uruzgan and Zabul provinces.

Also on Saturday, the Taliban issued an invitation of amnesty to Afghans working for NATO, or the government in Kabul. They claimed thousands of Afghan soldiers are deserting to join the insurgency.

The message, posted in English online, invited Afghans “to protect themselves and their families from shame and harm in this world and rescue themselves in the hereafter from fate of those who take infidels as their allies.”

The message repeated Taliban claims that the Afghan government is a puppet of the United States and cited grievances against the government, such as widespread corruption, a struggling economy and the appointment of “notorious warlords” to high government positions.

They also claimed the defeat of foreign forces, saying most foreign troops had been expelled from the country, and thousands have been killed or wounded.

“The rest have taken refuge inside a limited number of bases in cities which are also under mujahedeen attacks,” the message said, using the Arabic term for holy warriors.

The Taliban message comes the day after NATO officials in Brussels said they had agreed to extend the Resolute Support mission beyond 2016.