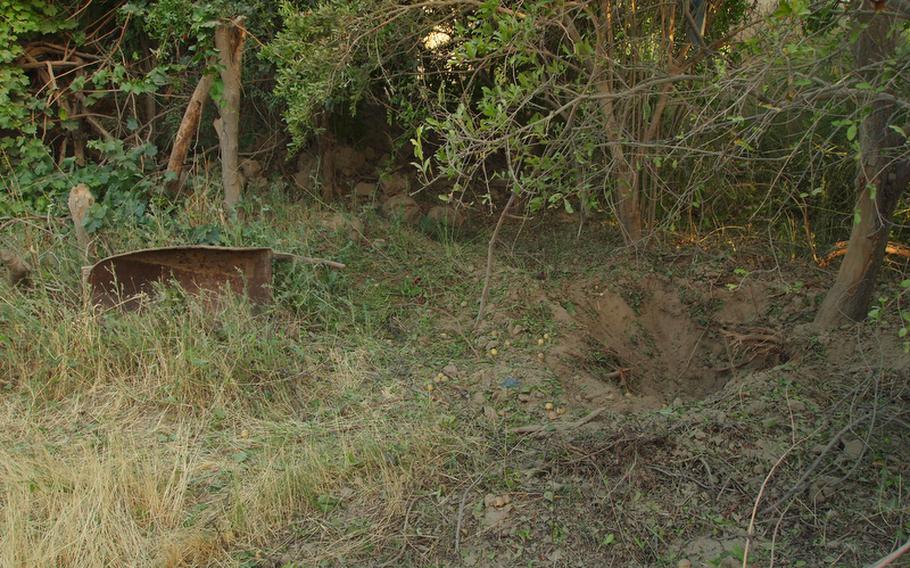 Buy Photo
A wheelbarrow lies on its side near the site of an improvised explosive device explosion that killed an Afghan policeman June 3. The crater left by the bomb's detonation was, coincidentally, about the size of the wheelbarrow. (Matt Millham/Stars and Stripes)

Buy Photo
A wheelbarrow lies on its side near the site of an improvised explosive device explosion that killed an Afghan policeman June 3. The crater left by the bomb's detonation was, coincidentally, about the size of the wheelbarrow. (Matt Millham/Stars and Stripes) 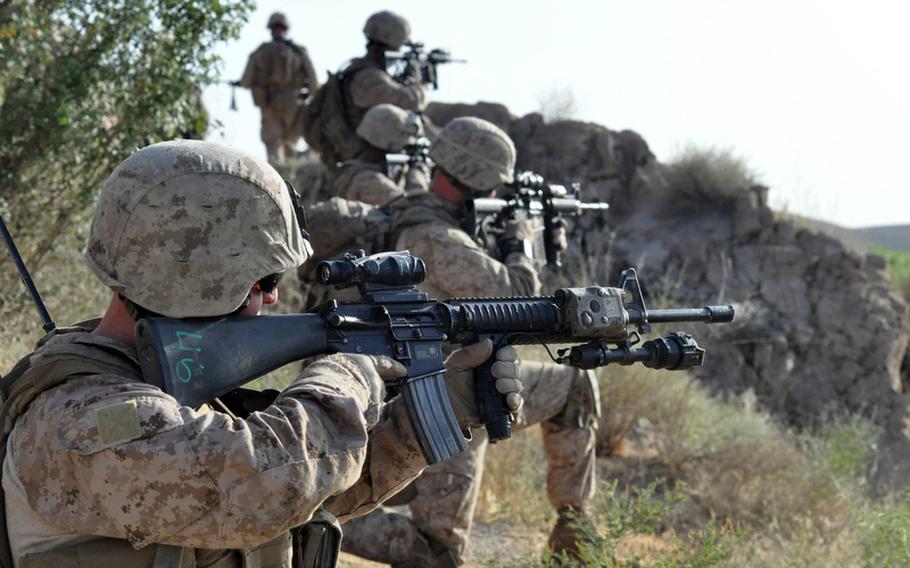 Buy Photo
Marines from Battery E, 2nd Battalion, 12th Marine Regiment scan the horizon during a security halt June 3 on their way to investigate the site of a homemade bomb explosion that killed an Afghan policeman. (Matt Millham/Stars and Stripes) 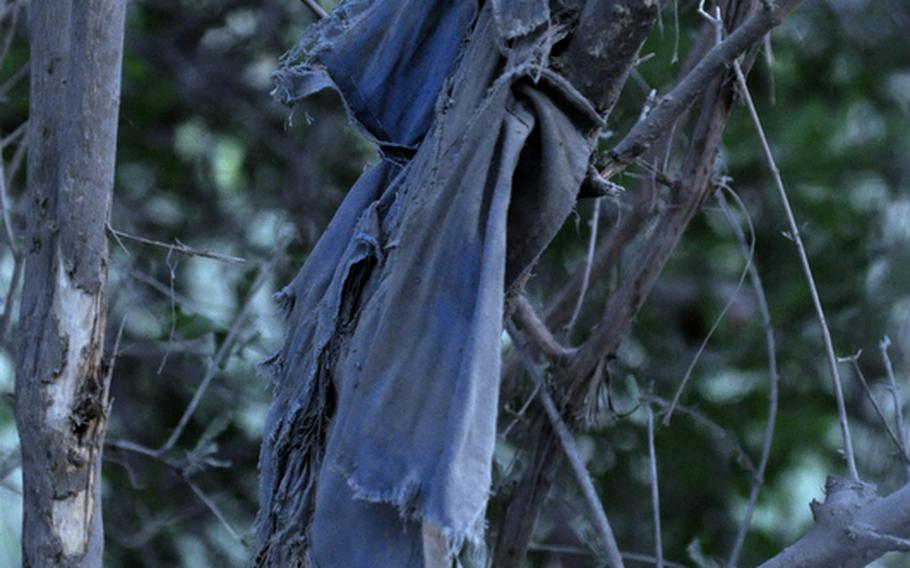 Buy Photo
A shred of an Afghan police uniform hangs in a fruit tree hours after the officer was killed by a Taliban bomb. Marines from Battery E, 2nd Battalion, 12 Marine Regiment investigated the blast site, and found another improvised bomb as they returned to base. (Matt Millham/Stars and Stripes) 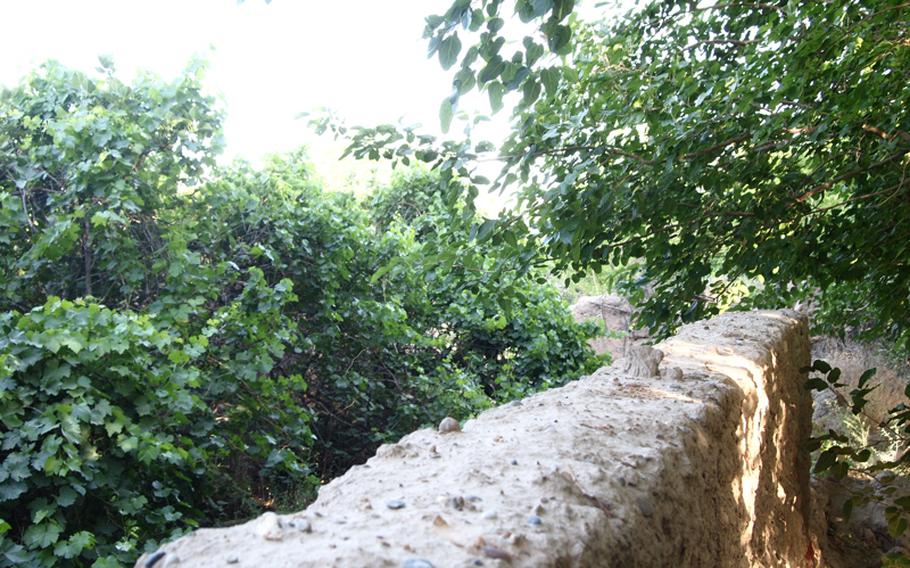 Buy Photo
This photo, snapped as Battery E Marines moved in to find the site of a bomb blast earlier in the day, was taken within feet or inches of a pressure-plate-operated improvised explosive device later found, dismantled and destroyed by a bomb tech. (Matt Millham/Stars and Stripes)

KAJAKI, Afghanistan &mdash; Just about every GI who&rsquo;s been on patrol experiences a close call.

Mine came June 3. It likely wasn&rsquo;t as close as I&rsquo;ll relay to my grandkids, but in Kajaki I found myself nearer to a life-changing event than my parents, certainly, would find comfortable.

Just hours after I had stepped off the helicopter that brought me here, an Afghan policeman stepped on an improvised explosive device and was killed. His comrades brought his remains back to base and buried him.

Meanwhile, Marines with Battery E, 2nd Battalion, 12th Marine Regiment, donned their flak vests, loaded their weapons and checked the batteries on their metal detectors. While the police headed into the base, the Marines were headed out, with two explosive ordnance technicians and one sunburned reporter in tow, to check out the blast site and gather clues about the bomb.

The path down to the crater started at the upper lip of a steep, rocky grade and wound through thick grass and trees between a derelict canal and the backyards of a jumble of abandoned mud dwellings. We passed assorted fruit trees and grapevines growing in a wild state of neglect and imagined, or at least some of us did, how beautiful it must have been before it was deserted.

After a long, plodding trek, the technicians found the crater. That was the easy part. About the size of a wheelbarrow, it gaped at the base of a slender fruit tree, its roots now shattered, in the back garden of one of the derelict homes.

There was little talk, but the air crackled with radio chatter, the squeals of the metal detectors, and the buzz and song of insects and birds.

The bomb techs worked mostly in silence, stopping occasionally to inspect the cause of a ping from one of their instruments. After nearly an hour of searching, they reported finding nothing of much use. We turned around and headed back the way we came.

As I&rsquo;d been on the way out, I was again near the back of the pack. Sgt. Craig Young, one of the bomb techs, was in front of me. Just 24 years old, he&rsquo;s a solemn guy, more serious than most of the other enlisted guys. He&rsquo;s also, I was about to find out, really good at his job.

After climbing over the remains of a busted wall and walking a couple yards to our right, Young stopped short in front of me.

&ldquo;Hey, Gunny,&rdquo; he said, calling the attention of the senior tech. &ldquo;We definitely got white wire.&rdquo;

At first I was curious and moved up to see what he was looking at. Young shot me a look, and in soldier-speak, advised me to stay back.

A boot print in the fine dirt indicated at least one of the Marines ahead of Young barely missed stepping on a pressure plate, a sort of switch used in a variety of bomb the military refers to as a &ldquo;victim-operated IED.&rdquo; Because the trail was barely more than a foot and a half wide, we&rsquo;d all stepped within feet or inches of the pressure plate coming in; most had done the same going out.

At the other end of the wire, Young found a 10-pound explosive charge, enough to take a leg, if not a life.

This one, thankfully, did neither.

Less than an hour later, the entire squad and I watched and listened with boyish giddiness for the controlled detonation.

&ldquo;One minute,&rdquo; somebody called from somewhere on the other side of the mud wall we were using as shelter.

&ldquo;Twenty seconds,&rdquo; the voice said, and we all stared into the fading light.

Debris jettisoned into the twilight.

&ldquo;That was like the 4th of July,&rdquo; somebody quipped.

Not quite. There was, after all, no celebration. Only the beginning of a long summer for Battery E.