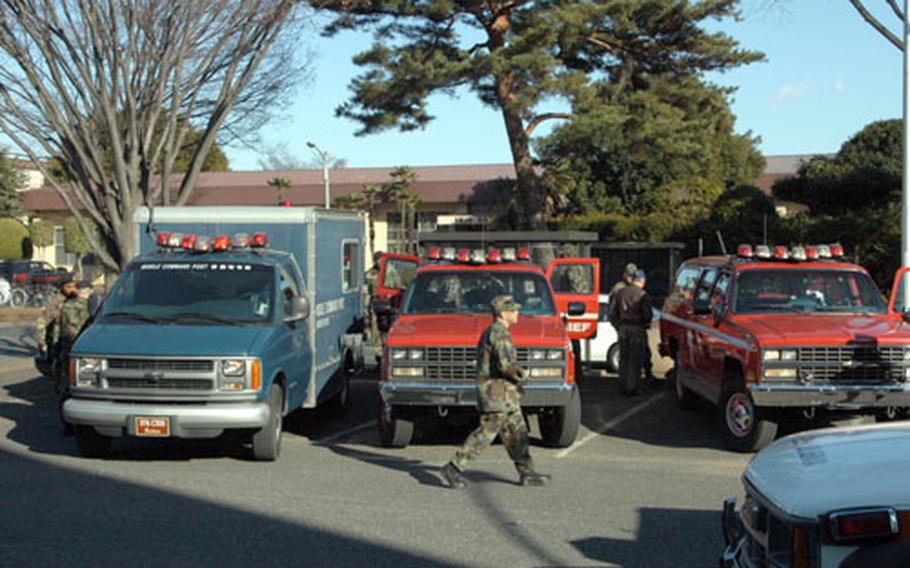 Yokota Air Base, Japan, emergency vehicles are parked in the lot of the West Chapel following a bomb threat Thursday. Security forces cordoned off several blocks around Yokota Community Center, which is near the parking lot where a threatening note was found. (Vince Little / S&S)

YOKOTA AIR BASE, Japan &#8212; Airman 1st Class Heather Norris told her co-workers at the 374th Communications Squadron she had to run an errand and would return in about 10 minutes.

But shortly after 12:15 p.m., she was stopped by base security forces as she drove along Airlift Avenue.

Norris was among those for whom life in the heart of Yokota came to a virtual standstill Thursday afternoon when a bomb threat scribbled on a note was found on the windshield of a car parked next to Building 316.

Sitting next to the wing&#8217;s headquarters, Building 316 houses the 374th Mission Support Group leadership and base education office.

Normally a bustling daytime locale with people filling sidewalks, streets and parking lots, the area was deserted by early afternoon.

Fussa gate, the main entry point to Yokota, was closed for traffic control, Wenz said. All other gates remained open.

Officials declined to disclose the note&#8217;s contents or discuss its possible source, saying only that the matter is being investigated.

If nothing else, it was certainly a disruption for base residents.

The group stood outside in the cold, biting wind for roughly an hour before officials announced people could seek refuge in the West Chapel, Outdoor Recreation Center and Enlisted Club.

Master Sgt. Johnny Jones, a recent arrival at Yokota who also sought shelter in the Enlisted Club, said he fully understood the caution being exercised by base authorities.

People were permitted to leave the staging areas but many had been stranded because their vehicles were parked inside the cordoned-off zone. While school buses departed on time in the afternoon, the Kanto Express &#8212; the base shuttle system &#8212; was halted. West side-bound school buses were detoured off-base to get children around the cordoned area and home.

At 4:15 p.m., when the command post determined it was safe to re-enter the buildings and normal base activity resumed, officials still offered few clues about the threat.