Bomb kills at least 17 near Indian Embassy in Kabul 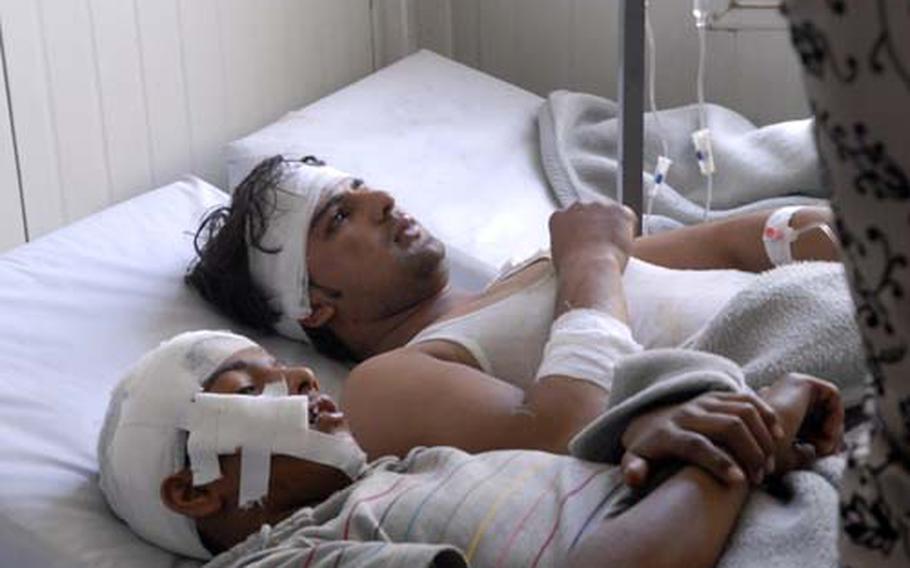 Cousins Sameem Kareem, 14, left, and Nakhybullah Haydur, 20, share an emergency room bed after being wounded in a powerful bomb blast outside the Afghan Ministry of Interior and the Indian Embassy in Kabul. The two cousins, who were sitting outside their family&#39;s photo shop at the time of the bombing, had both been injured in another bombing in the capital two years ago. (Dianna Cahn / S&S)

Cousins Sameem Kareem, 14, left, and Nakhybullah Haydur, 20, share an emergency room bed after being wounded in a powerful bomb blast outside the Afghan Ministry of Interior and the Indian Embassy in Kabul. The two cousins, who were sitting outside their family&#39;s photo shop at the time of the bombing, had both been injured in another bombing in the capital two years ago. (Dianna Cahn / S&S) Arafa Sharpoor huddles at the hospital bedside of her husband, Ismail Mohammad Sharpoor, 45, who was wounded in a powerful bomb blast Thursday morning outside the Ministry of Interior and the Indian Embassy. Sharpoor was recovering at Jamhoriat Hospital, just up the road from the blast. (Dianna Cahn / S&S) Bashir Ahmad, a food street vendor, left, receives care at Jamhoriat Hospital in Kabul after receiving a head trauma and other injuries in a powerful bomb blast outside the Ministry of Interior and the Indian Embassy. His brother. Fareed Ahmad, right, questioned why the foreign forces in Afghanistan were not keeping people safe. (Dianna Cahn / S&S)

KABUL, Afghanistan &#8211; A bomb blast ripped through the capital as Afghans made their way to work Thursday morning, killing at least 17 people and wounding another 63 outside the Ministry of the Interior and just alongside the Indian Embassy.

The Interior Ministry said the bombing was the work of a suicide bomber in a 4x4 vehicle laden with explosives. The Associated Press reported that the Taliban claimed responsibility for the attack.

The bombing sent reverberations through the Afghan security forces as well as the Indian Embassy, which was the site of a deadly bombing last year that killed more than 50 people including the Indian defense attach&#233;. It wasn&#8217;t clear Thursday whether the Afghan government or the embassy was the target of the bombing.

&#8220;We think the target was the Indian Embassy but it would really be too early to say,&#8221; said Zamarai Bashary, spokesman for the Interior Ministry. &#8220;We are still in the early hours of the investigation and it is ongoing.&#8221;

The interior minister commended the two police officers who were killed when they stopped the suicide bomber in his vehicle as he pulled up to the gate at the end of the road leading to both the ministry&#8217;s passport office and the Indian Embassy, Bashary said.

The bomber then detonated his vehicle at the checkpoint, killing the two officers.

&#8220;They gave their lives to protect the people of Afghanistan and their countrymen from dying,&#8221; Bashary said. &#8220;There could have been much heavier casualties. These two police officers did an extraordinary job.&#8221;

Earlier, a ministry statement condemned the bombing, saying it was work of the enemies of Afghanistan.

The statement appeared to be a veiled reference to Pakistan, which is considered the base for Taliban and al-Qaida insurgents.

Officials have yet to determine who was behind the powerful bomb, but the violent assault in the heart of the capital was a stark reminder of the reach and power of the insurgency that has gained momentum in most of the country. Attacks in the capital have stepped up since the lead up to presidential elections in August that have since been tainted with allegations of fraud.

If the attack targeted the Indian Embassy, suspicion would still be directed at Pakistan, India&#8217;s arch-rival.

The 8:30 a.m. blast sent a barrage of wounded to the city&#8217;s main hospitals. At Jamhoriat Hospital just down the road from the blast, 37 wounded arrived for treatment, according to the government&#8217;s hospitals spokesman, Dr. Sayed Kabir Amiry.

The decapitated body of young man was brought to the hospital morgue where a pharmacist said the victim was 22 years old.

Inside, relatives cried at the bedsides of blast survivors.

&#8220;I am not crying just because my brother is hurt. I am crying because of all the Afghans in here, some hurt very seriously,&#8221; said Fareed Ahmad, standing over the bed of his brother Bashir, who was lightly injured. Bashir&#8217;s co-worker was seriously hurt.

Ismail Mohammad Sharpoor, a security guard, was on his way to work at the nearby Afghan Women&#8217;s Education Center when the explosion was set off. He was lightly wounded in his hand and face.

His wife, Arafa Sharpoor, said tearfully that their four children at home did not know their father had been hurt. She said her daughter called her earlier but Arafa did not have the heart to tell her the truth. Instead, she said that they were both safe at the office.

In an emergency room bed, two cousins lay side by side wearing head bandages. Sameem Kareem, 14 and Nakhybullah Haydur, 20, were sitting outside their family photo shop when the bomb went off. Still in shock, the two said they&#8217;d both been injured in a bomb blast in the same area two years ago.

After living through yet another blast, the two cousins were thankful.