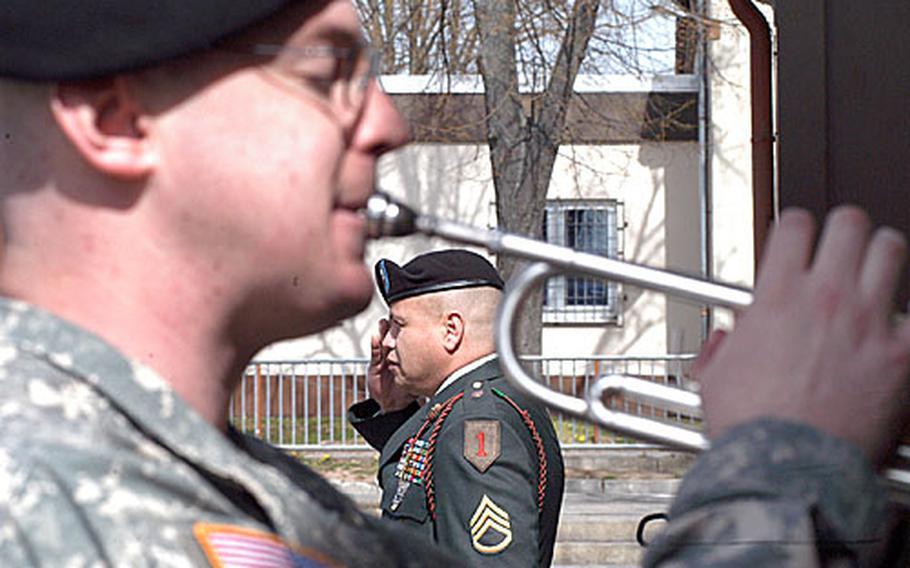 SCHWEINFURT, Germany &#8212; Spc. Sean K. McDonald wasn&#8217;t the kind of guy who wanted a lot of recognition for what he did. But his job was both very important and extremely dangerous.

McDonald, an engineer from the 2nd Brigade Combat Team, 1st Infantry Division, was one of the soldiers tasked with seeking out and destroying roadside bombs, one of the most popular weapons used by insurgents.

It was an extremely deadly bomb &#8212; a so-called explosively formed penetrator &#8212; that took his life and injured two of his comrades while they searched a road for such dangers in northwest Baghdad.

At a memorial ceremony Thursday, the Schweinfurt community gathered in the chapel at Ledward Barracks to remember McDonald, 21, of Rosemount, Minn.

&#8220;He knew, by conducting these long-hour and grueling patrols in search of our enemies&#8217; most dangerous weapon, that he played a key role in protecting the lives of other coalition soldiers and innocent Iraqi civilians,&#8221; said Capt. Chad Ramskugler, reading from remarks that had been delivered by Lt. Col. Glen Masset, commander of McDonald&#8217;s unit, the 9th Engineer Battalion, during a memorial Saturday in Baghdad.

Masset said McDonald understood the value and importance of his mission, and took pride in the role he played in keeping others safe. Though McDonald had been in the Army for a little more than three years, his superiors had faith in his leadership and ability to get the job done. It&#8217;s a point he was proud of and conveyed to his friends and family back home.

&#8220;My son gave his life for this country and I am not bitter; I am proud to have had such an honorable son,&#8221; Russell McDonald, Sean McDonald&#8217;s father, wrote in an e-mail, according to Masset.

Those words were read by Pfc. Seth Gordon, who was also a close friend of McDonald&#8217;s.

It was this ability to get things done that landed McDonald in the role of team leader, even as a private first class. But without a leader&#8217;s rank on his collar, Mickey had to get respect from his soldiers the old-fashioned way &#8212; by earning it.

But Yazzie came around when McDonald stuck up for him and the rest of their team as they trained up for their deployment to Iraq. Despite their feuding, McDonald toasted Yazzie when they returned from a training exercise. &#8220;We overcame that and became good friends,&#8221; Yazzie said.

But Mickey wasn&#8217;t looking to be congratulated for this.