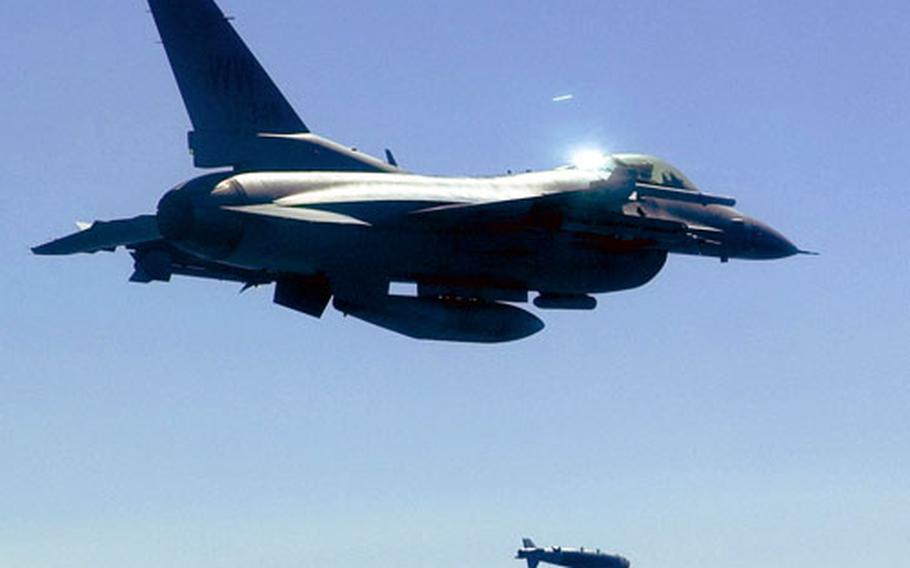 MISAWA AIR BASE, Japan &#8212; A big hit on a small target in northern Japan earlier this year could drive change at similar military bombing ranges worldwide, according to Air Force officials.

Pilots and planners with the 35th Fighter Wing have long been hampered by safety regulations that prevented them from dropping joint direct attack munitions &#8212; all-weather guided bombs &#8212; on Draughon Range, about 10 miles north of the base. Instead of firing the inert 500-pound GBU-38 bombs locally, pilots would have to travel to the States to stay qualified.

The problem is what is called the weapon footprint, which encompasses every possible place it could strike if it failed and didn&#8217;t hit its intended target. Because of Draughon&#8217;s limited size, the joint direct munitions were off-limits.

But late last year, the Air Force introduced a new computer program &#8212; called the Weapons Danger Zone Tool &#8212; that is used to evaluate the footprint. What pilots here found with the new program, said Capt. James Cooke, with the 35th Operations Support Squadron, was a way drop the munitions on Draughon.

The older computer program, called Safe Range, used the same sort of criteria &#8212; the weapon, plane and size of the range, among other factors &#8212; to determine the footprint.

But the old program contained "very broad data," Cooke said, "so it didn&#8217;t really give an accurate replication of what the weapons would do."

Cooke said that with the new program &#8212; and a new approach to the range &#8212; the weapon footprint stayed within the range parameters, meaning they could drop the 500-pound bombs.

In mid-May, Cooke and the wing&#8217;s vice commander, Col. RC Craig, took to the air and drilled the range with two GBU-38s.

"The weapons did really well," in the test, Cooke said.

Air Force officials had alerted their Japanese counterparts about the training mission, he said.

News of the success traveled quickly, and officials in Washington, D.C., said it bodes well for other ranges around the world.

Col. Edward J. Chupein, chief of the Air Force&#8217;s Ranges and Airspace, said during a phone interview that Misawa&#8217;s test was "a leap forward."

Chupein develops range policy for the service and works with 43 ranges on 8.3 million acres across 10 major commands and all services.

The ability to use these munitions "on their local backyard ranges is huge," he said and is critical in overseas locations with limited range space.

"We&#8217;re feeling greater and greater competition for those resources," he said. "We find ourselves somewhat limited."

Chupein said that other ranges are going through the same sort of evaluation process.

"Misawa, because of the challenges they have, really represented sort of a pointed milestone," he said

Chupein said lessons learned at Misawa will be important as others look at their ranges.

When the range procedures are officially rewritten, Cooke said, other services &#8212; like Marines from Marine Corps Air Station Iwakuni, Japan, and Navy pilots from Naval Air Facility Atsugi, Japan &#8212; will also be able to drop the weapons here.