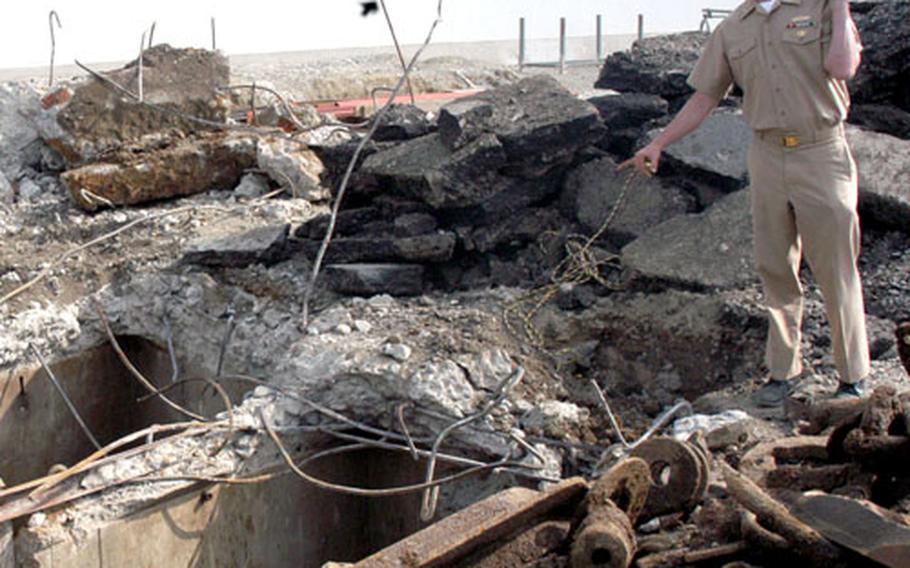 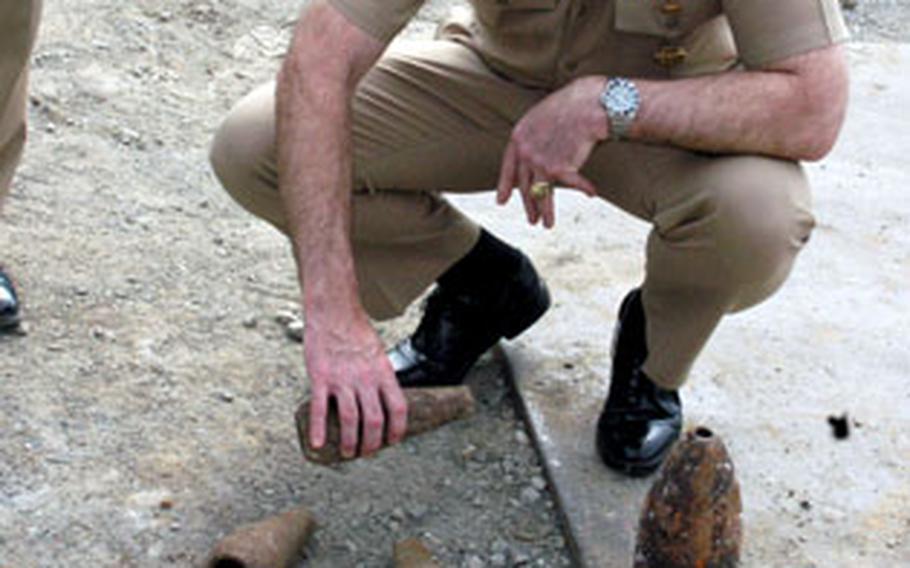 SASEBO NAVAL BASE, Japan &#8212; A cache of unexploded ordnance found at a construction site Monday, at first believed to contain about two dozen shells, contained hundreds of shells, boosters and mortars, including two with explosives, Sasebo Naval Base officials said Tuesday.

About 350 people were evacuated from nearby commands and facilities after the discovery. They remained home from work Tuesday while officials awaited the removal of the cache of aging ordnance.

The first shells were unearthed by Japanese work crews digging under a former storage building behind McDonald&#8217;s on Monday. Since it was a Japanese-funded project, Japanese officials were required to remove and destroy the cache, said Capt. Tilghman D. Payne, base commander.

The Japan Ground Self-Defense Force was called in to remove the shells. A JGSDF bomb crew arrived around 11 a.m. Tuesday and uncovered two large concrete storage bunkers filled with steel shells and other debris. The bunkers and their contents date to the Japanese Imperial Navy.

Finding old ordnance is not unusual, but this was the largest find at Sasebo that people now working there can recall, said Lt. Cmdr. Brett Blanton, the base&#8217;s public works officer.

The two shells containing explosives had no fuses.

JGSDF bomb crews removed the two explosive shells. The rest, along with odd pieces of old equipment including a tire, were piled around the two empty bunkers Tuesday evening. Work crews will remove the debris and immediately resume construction, Payne said.

The area was reopened at 2:30 p.m. Tuesday; some workers returned that evening.

An area about 50 yards surrounding the cache was closed off Monday, including the base&#8217;s back gate and several buildings.

Scores of workers were alerted Tuesday morning that they should stay home.

Among the closed facilities were McDonald&#8217;s restaurant, the Galaxies Club and Fleet Gym. Navy Federal Credit Union and Community Bank &#8212; the main source for currency exchange on the base and the bank for all base commercial activities &#8212; also were closed.

The construction area is the site of the future Fleet Gym, which is to open in August or September.

About a month ago, base officials said, a single 8-inch shell was uncovered during an American-funded construction project at the new Navy Exchange building and was removed by Navy explosive ordnance disposal crews. The shell was inert.