Ahmed Jawad Sekandari, pictured here on Aug. 17, 2016, standing near the corner store where his son was killed by flying debris during a January suicide bombing. He said he fears a worsening security situation in Afghanistan. Insurgent violence has taken a human and economic toll on his family. (Chad Garland/Stars and Stripes)

Ahmed Jawad Sekandari, pictured here on Aug. 17, 2016, standing near the corner store where his son was killed by flying debris during a January suicide bombing. He said he fears a worsening security situation in Afghanistan. Insurgent violence has taken a human and economic toll on his family. (Chad Garland/Stars and Stripes) Glass in these windows was shattered during a January 2016 suicide attack in the Taimani neighborhood of Kabul. Afghan homes like this one, pictured on Aug. 17, 2016, often have large window openings filled with several frames of single-pane plate glass. When a blast shatters the glass, it creates shard-like projectiles that can puncture and cut people in their homes. The mother, father, daughter and granddaughter living in this home all suffered glass wounds. (Chad Garland/Stars and Stripes) 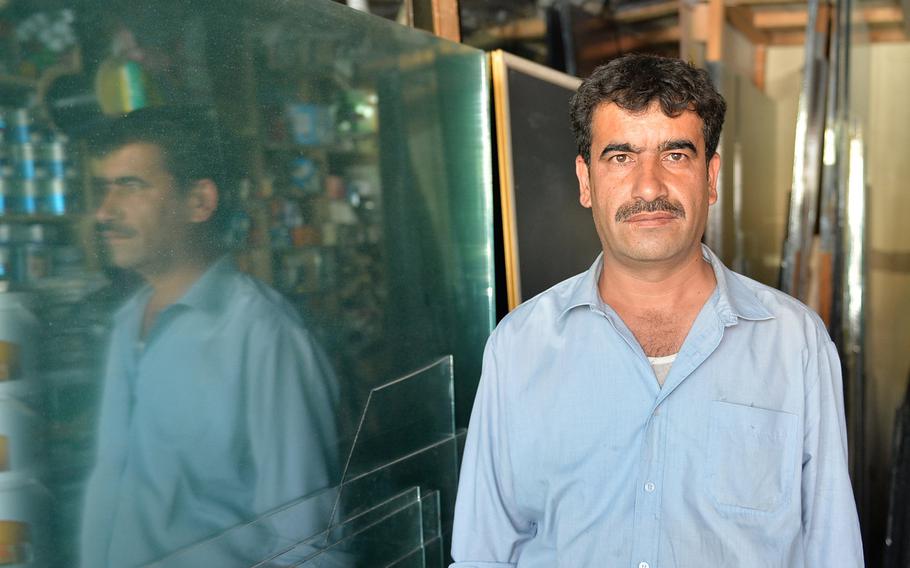 Abdul Matia Sofizada is pictured here in his glass shop on Aug. 17, 2016. Sofizada said his main business in recent years has been supplying glass to people whose windows have been blown out by bomb attacks. Following a January attack on the Le Jardin restaurant nearby, his business increased roughly seven times as customers, still in shock, came to buy new windows. (Chad Garland/Stars and Stripes) 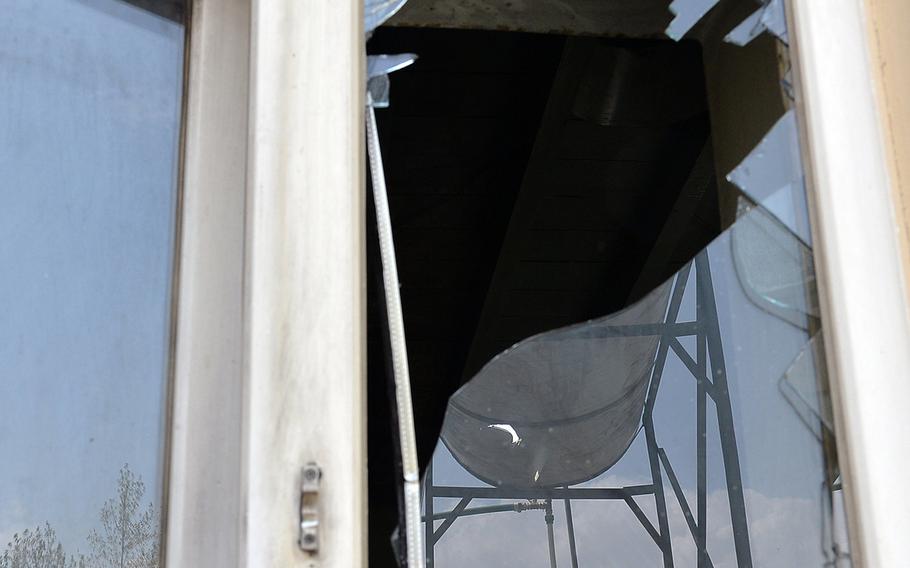 This plate glass window at a school for the blind, pictured here on Aug. 25, 2016, was shattered by a bomb blast during a complex attack at the neighboring American University of Afghanistan the night before. Broken shards, propelled by the force of the blast, become like flying knives that can pierce and cut unsuspecting victims. (Chad Garland/Stars and Stripes) Shards of glass remain in the corners of this window at a school for the blind, pictured here on Aug. 25, 2016, that was shattered by a bomb blast during a complex attack at the neighboring American University of Afghanistan the night before. (Chad Garland/Stars and Stripes) 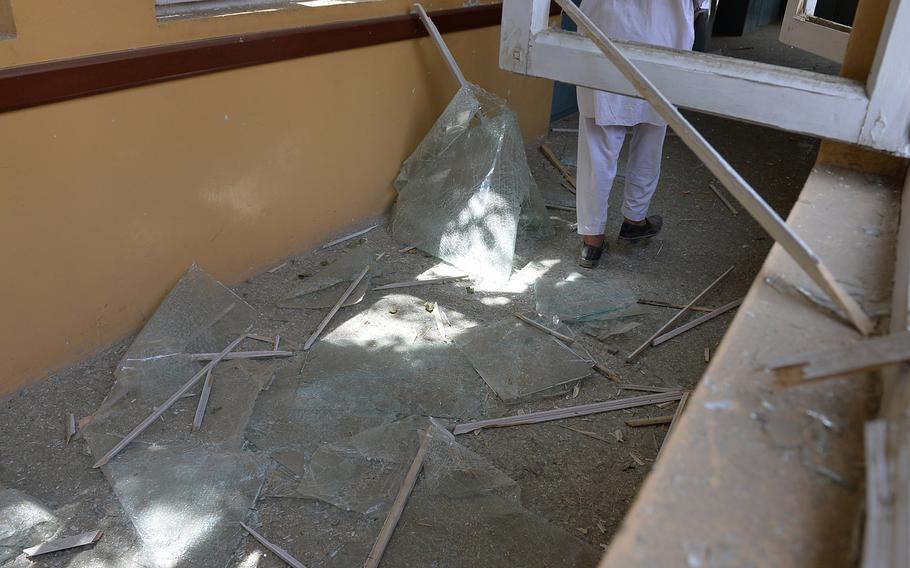 Some window glass in Afghanistan, like the pieces pictured here at a school for the blind on Aug. 25, 2016, the day after a bombing at the neighboring American University of Afghanistan, is treated with laminate film that keeps the glass shards from becoming deadly projectiles in a bomb blast. Many ordinary Afghans cannot afford the cost of the film and remain vulnerable to bomb attacks that turn the windows of their own homes into weapons. (Chad Garland/Stars and Stripes)

KABUL, Afghanistan — A sudden burst of air pressure from a bomb blast unleashed a hail of glass inside the home where Narzia was resting with her family. Flying shards from the blown-out windows severed her 5-month-old son’s finger, mangled her mother-in-law’s arm and wounded her husband and all but one of her seven children.

Victims of flying glass and other debris are the unintended casualties of insurgent attacks that generally target foreigners or Afghan officials.

As a rule, however, poor people bear the brunt of these injuries. They cannot afford the tempered, treated or bulletproof glass that protects foreign and government compounds and homes of Afghan elites.

Shattered glass from the force of explosions is among the most common causes of blast wounds, experts say, and has injured people more than a mile away.

The pressure wave that showered Narzia’s family with glass was from a blast across their bumpy dirt street from a pricey French restaurant called Le Jardin, where foreign dignitaries and Afghan elites dined in an elegant garden behind high blast walls.

Most blast injuries and deaths are caused by projectiles — fragments of the bomb casing or embedded materials like nails or ball bearings, as well as other debris and glass. They can reach speeds more than double that of an M-16 round, which travels at about 950 meters per second, said Dr. Charles Stewart, an Army veteran and former emergency physician at the Air Force Academy hospital, who has treated and researched blast wounds.

These oddly shaped fragments decelerate faster than an aerodynamic bullet, but also travel unpredictable paths through the body, where Stewart said they can “rip off and do other damage.”

Glass causes up to half of all blast wounds, according to Stewart’s research. It’s “a big deal,” he said, because it’s everywhere in urban environments and extremely fragile.

Like a dropped champagne flute, windows explode into pieces ranging from tiny slivers to large chunks, which can penetrate skin and eyes. Stewart said victims can be peppered with cuts, each containing splinters of glass that can cause serious complications if untreated. “You have to presume every little hole is harboring a fragment.”

The glass used in windows can be hardened against blast forces and projectiles, tempered to break into dull bits instead of sharp-edged shards or reinforced with clear laminate sheets that keep fragments from spraying into rooms.

But ordinary Afghan window panes are often single layers of plate glass that’s as defenseless against gunfire as it is supersonic blast waves that shatter it into hundreds of knifelike weapons before anyone even hears the explosion.

The sound of the boom didn’t reach Dr. Habib ur Rahman Qasim’s ears until after a powerful pressure wave sent him stumbling, blew out the windows and knocked a door off its hinges in his office at a clinic in the Makroyan Four area of Kabul in August 2015. Fortunately, he said, he was standing several feet away from the window, treating a patient, and got only a minor glass cut.

The explosion, which targeted a convoy of foreigners, had launched an armored vehicle about 50 feet, over the head of a vendor on the sidewalk and into a courtyard below Qasim’s window. It blew out windows in many nearby buildings. The Taliban attack killed a dozen people — three of them foreigners — and wounded more than 60.

Such attacks, of which there have been roughly two-dozen in Kabul so far this year, incur costs the average Afghan can ill afford to pay. Some struggle to fix the physical damage while they mourn shattered lives and a fragmented country. Others regard repairs as pointless because of the worsening security situation and a crippled economy.

Standing across from the French restaurant, which remains closed, Narzia, who like many Afghans goes by one name, said her family had to move after the attack because it could no longer afford the rent after the home was repaired.

Mashal Omar Zada, another neighborhood resident, said he was still picking slivers of glass from the back of his daughter’s head a month after the attack. His wife, mother, father and brother-in-law also suffered glass wounds.

“We were the biggest victims,” said Haidar Nasiri, an Afghan taxi driver who still lives across from Le Jardin. In mid-August, he was taking his daughter for her third operation to repair a gash in her face caused by flying glass.

His daughter’s surgeries have cost roughly $1,500, he said; household repairs have cost double that.

That’s a considerable amount in a country where more than one-third of the population lives in poverty. The average Kabul resident lived on less than $700 a year, according to a joint World Bank and Afghan government report released in 2012, two years before the major economic downturn that has cost thousands of Afghans their jobs.

Ahmed Jawad Sekandari, whose 8-year-old son was killed by shrapnel while buying fruit juice for his brother at a store across from Le Jardin, paid $400 to repair the broken windows in his home so his family could host mourners. It was the equivalent of four months of living expenses for him, his wife and his remaining son, he said.

Sekandari himself was nearly struck by a large glass shard during a Taliban bombing at the airport just days before the Le Jardin attack. But even knowing the risks of glass wounds, he said he couldn’t afford to install blast-proof windows. Neither could many of his neighbors, some of whom said shops raised the price of normal glass after the attack.

“All of my neighbors lost money. All paid more than $400,” Sekandari said. “Some had to borrow money.”

About 30 neighbors in the roughly two dozen houses surrounding the restaurant were wounded by glass fragments, residents said. A guard at the restaurant, was also killed in the attack.

The broken glass was later piled in a large heap the size of two or three cars on the dirt street near the restaurant, and residents had to pay to have it hauled away.

In the days after the bombing at Le Jardin, daily receipts at Abdul Matia Sofizada’s glass shop increased roughly seven times, from an average $37 to about $260. But, he said, he did not raise the price of glass and even allowed some customers to pay him over the course of two or three months.

“I was not happy that my sales increased,” Sofizada said. Neighbors were coming to his shop still in shock. “That was a big loss, unlike the happy occasion of a new home. I was not thinking about my profit.”

Though he said he did good business supplying Afghanistan’s reconstruction efforts several years ago when he set up shop, what business he gets now comes mostly from people replacing windows after attacks.

Bomb-resistant panes or treatments such as clear Mylar laminate film would have cost three times as much as standard plate glass, which in his store runs about $15 per window, Sofizada said. Residents near Le Jardin said they had to replace eight or more windows in each home.

Elsewhere in Kabul, near the site of an April truck bombing that shattered windows across a swath of the city and shook them as far as two miles away, several homes remain windowless. “It’s because of the lack of sustained income,” said Obaid Ali, an analyst with the independent Afghanistan Analysts Network.

In the provincial capital of Kunduz in the north, where steady work is even harder to come by, some residents haven’t fixed damage done when the insurgents briefly captured the city almost a year ago. They view repairs as futile and wasteful, at least while clashes between the Taliban and Afghan security forces near the city continue and the likelihood of more damage remains high, Ali said.

Standing by metal doors riddled with punctures and pockmarks at the corner store where his son was struck and killed by shrapnel, Sekandari said he feels Afghanistan’s top leaders don’t care about the nation but “are following their own agendas.”

Ali said that’s a common sentiment among many Afghans who have seen insecurity and corruption increase under the leadership of President Ashraf Ghani and Chief Executive Abdullah Abdullah, not decline as promised. Meanwhile, Sekandari’s remaining son is in shock, “terrified by loud noises,” and Sekandari himself fears that he’ll become another unintended victim in the next attack.

“The situation is getting worse day by day.”