Bomb at ATM prompts warning to US military in Bahrain 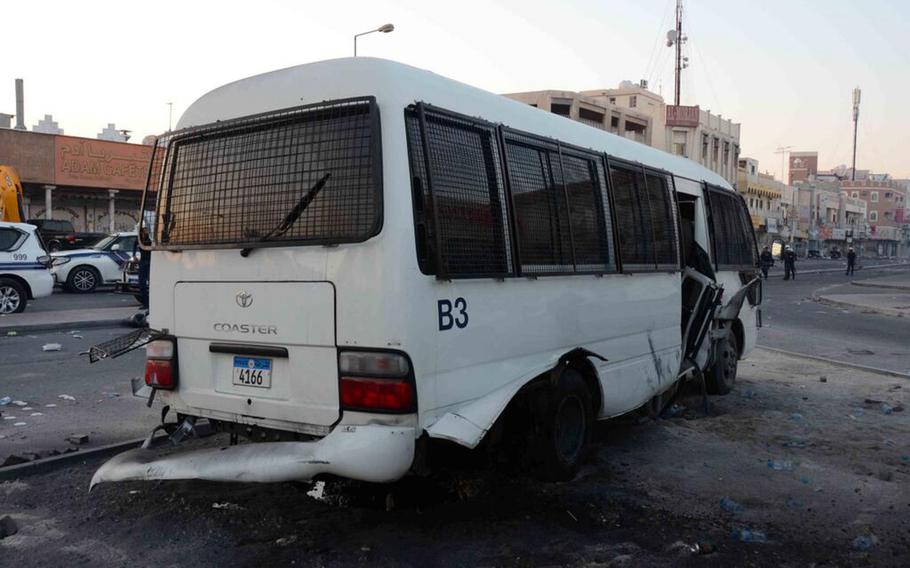 An explosion damaged a bus transporting police officers in Daih, Bahrain, on Feb. 14, 2014. U.S. military officials have issued a warning to servicemembers and personnel in the island nation regarding the risk of bomb attacks. (Courtesy Bahrain Interior Ministry)

MANAMA, Bahrain — U.S. military officials here issued a new warning Tuesday to U.S. personnel and families living in this island kingdom, which has experienced a spike in violent activity in recent weeks.

Officials are urging personnel to be careful around ATMs off base, particularly at night and early in the morning. They cited a “recent incident” in which an improvised explosive device was found near an ATM.

The warning follows a bomb attack Monday in the village of Daih in which three police officers were killed while dispersing a group of rioters, according to Bahrain’s Interior Ministry.

The message sent to servicemembers and dependents Tuesday asks personnel to scan areas around ATMs for items that are out of place or suspicious and to alert base security officials of any abnormal activity.

There has been no direct targeting of Americans to date, but the statement warns that “additional IED events through March 31st are highly likely.” It also advises personnel to stay away from areas where Bahraini security forces are gathered.

Bahrain, which is home to the U.S. Navy 5th Fleet and some 7,000 U.S. personnel and families, has been the site of sporadic demonstrations since February 2011, when citizens gathered in massive protests to demand political and economic reforms. Every year since then, the country experiences an uptick in protests and violence around Feb. 14, the anniversary of the start of the protest movement. Attempts to disrupt traffic and potential clashes with police may occur for several weeks after the anniversary, according to the U.S. Embassy.

On Tuesday U.N. Secretary-General Ban Ki Moon condemned the attack in Daih and offered condolences to the families of the police officers.

“Such acts of violence cannot be justified by any cause,” Ban said in a statement.

Two other blasts occurred in the area where the police officers were killed, but no other deaths or injuries were reported. Officials say 25 suspects have been arrested so far in connection with the attack.

Navy officials say that all 5th Fleet and base operations are running normally and that there has been no change to the security posture. On Sunday the aircraft carrier USS Harry S. Truman concluded a five-day port visit.