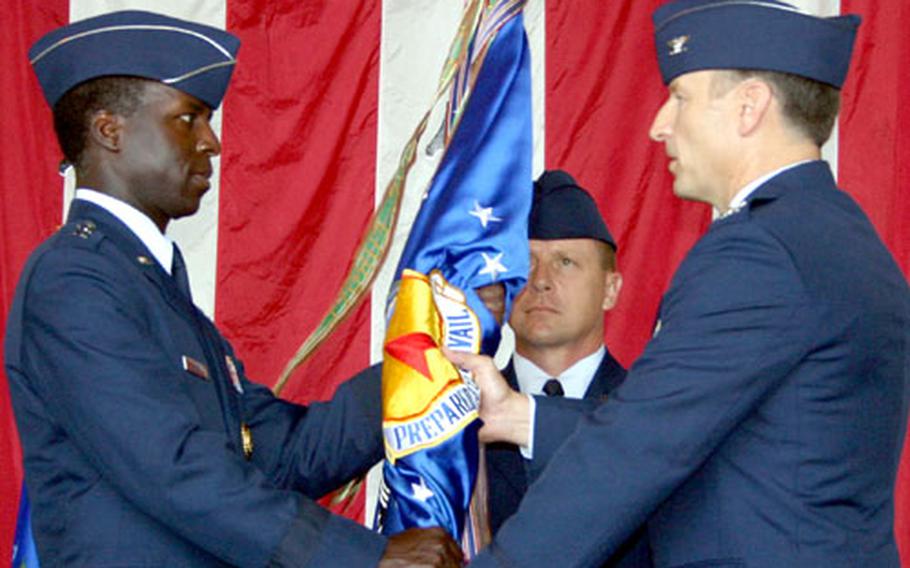 Maj. Gen. Edward A. Rice, left, commander of the 13th Air Force, presents the guidon of the 36th Air Expeditionary Wing to Col. Michael R. Boera during the change-of-command ceremony at Andersen Air Force Base, Guam, on Monday. (Frank Whitman / Special to S&S)

During the morning event, Maj. Gen. Edward A. Rice Jr., 13th Air Force commander, presented White with the Legion of Merit for his leadership during the past 19 months at Andersen. Rice cited the transition of the 36th from an Air Base Wing to an Expeditionary Wing, the absorption of units that were formerly part of the 13th Air Force and White&#8217;s oversight of more than $350 million in military construction funds.

White praised the personnel under his command and expressed confidence that Boera was the right person to take over. He also praised Guam.

&#8220;What a wonderful thing to be on an island where 86 percent of the population desire increased military presence,&#8221; he said, &#8220;where you have such unwavering support from government and elected officials and you have cooperation from the Chamber [of Commerce], local businessmen and even the boys in the &#8217;hood, where people truly understand the word &#8216;freedom&#8217; and are willing to sacrifice to make it so.&#8221;

White will command the ROTC unit at the University of Washington.

Coming from his most recent position as commander of the 35th Operations Group at Misawa Air Base, Japan, Boera said he hopes to make the best use of Andersen&#8217;s facilities.

&#8220;I hope to build on the accomplishments of Col. White and team Andersen and [soar] to even greater heights,&#8221; he said after the ceremony. &#8220;The increase in training opportunities is one of the things we&#8217;re looking at, to maximize the airspace here as well as the bombing ranges.&#8221;