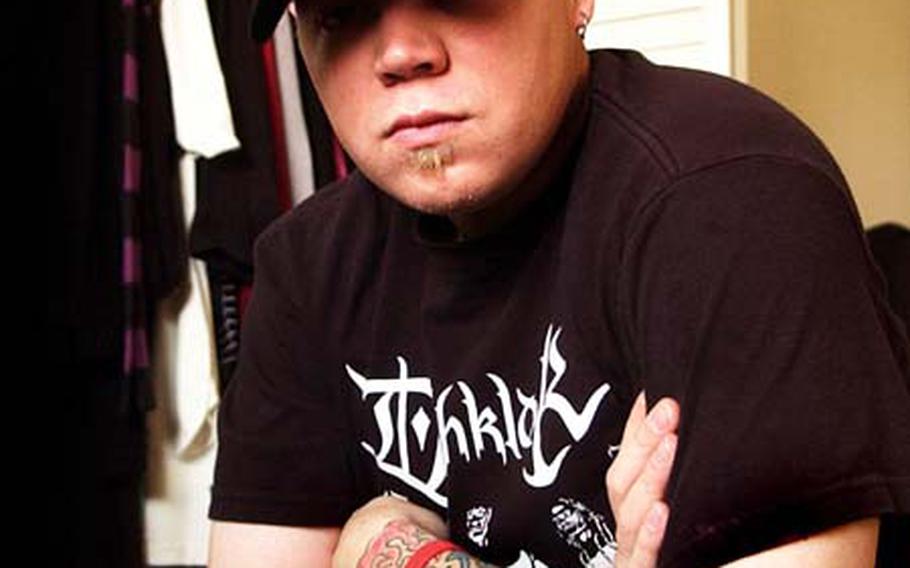 Justin P. Lago shows off his sleeve tattoo on March 25. Marine Corps Sgt. Maj. Carlton Kent says he has told thousands of Marines that one reason why the Corps banned sleeve tattoos is that they can make it harder for Marines to find a civilian job. Lago disagrees. (Justin P. Lago/Courtesy to Stripes)

"He had sleeve tattoos, and they told him, &#8216;no way, no how,&#8217; " said Marine Corps Sgt. Maj. Carlton Kent, who served with the former Marine in the 1st Marine Expeditionary Force.

He was told he could reapply if he got his tattoos removed, Kent said.

Kent mentioned the story when talking about why he has told thousands of Marines that one reason why the Corps banned sleeve tattoos is that they can make it harder for Marines to find a civilian job.

"It&#8217;s the employers out there right now, they&#8217;re not hiring anybody with sleeve tattoos. Even the police forces now, come to find out, some of them are even telling people that they have to cover up their sleeve tattoos," he said.

In March 2007, the Corps banned "full-sleeve tattoos," which cover all of a Marine&#8217;s arms or legs, as well as half- and quarter-sleeve tattoos that are visible when Marines wear their PT uniforms. Marines who already had such tattoos were grandfathered under the new policy.

"We feel with this policy, we&#8217;re gonna set Marines up for when they get out so they can get a job somewhere," Kent said.

The Jacksonville Sheriff&#8217;s Office in Florida allows some tattoos to be visible, while others must be covered, said Jimmy Holderfield, chief of personnel for the sheriff&#8217;s office.

Other law enforcement agencies allow new recruits to have tattoos that are visible when wearing short-sleeves, provided they wear long-sleeve shirts all year round.

The reason for the policy, Mange said, is that some people may have tattoos that should not be seen in public.

The department, which is in charge of the Texas Highway Patrol and Texas Rangers, has several former servicemembers in its ranks, she said. Of the 104 people in the class of graduating recruits, 38 have prior military experience.

Still, the tattoo policy applies to everybody, Mange said. No exceptions.

The Ohio State Highway Patrol goes beyond that. It does not accept applicants with tattoos that are visible from state troopers&#8217; short-sleeve uniforms.

This policy applies to all uniformed employees, including state troopers, so that all have a uniform appearance, Blosser said.

"Troopers are not allowed to &#8216;cover up&#8217; their tattoos by wearing a long-sleeved shirt during the designated time we are mandated to wear short-sleeved shirts for the same reason: uniformity," Blosser said in an e-mail.

The highway patrol has other grooming standards for hair, jewelry and fingernail polish, Blosser said.

"We must have a reasonable interest in maintaining a professional, unbiased and neutral appearance, before the public we serve," he said.

Kent said the Marines he has talked to have taken to heart his warnings about how tattoos can adversely affect their job search after the Corps.

"That&#8217;s why right now you don&#8217;t see too many Marines going out even getting tattoos right now unless they [are] able to cover them once they are in the uniform, so I think that the message is getting out," he said.

But former Marine Justin P. Lago said his sleeve tattoos have never made it hard to get a job.

"I have one myself, in progress, with no reason to not finish what I have started," Lago said. "You simply wear a long sleeve to interviews."

Lago, who is currently out of work, said he feels tattoos are becoming more accepted in today&#8217;s society.

"If you are good at what you do and you prove your employers to be worth the money they pay you to do what you are hired to do, tattoos become irrelevant."