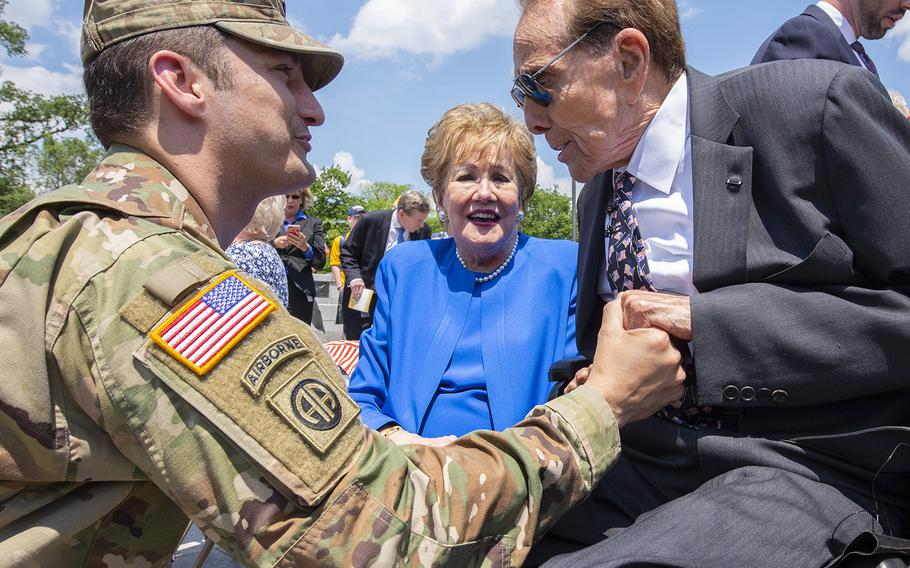 Former Sen. Bob Dole shakes hands with Lt. Col. Michael Lind with the Army's G-1 office during Dole's honorary promotion ceremony at the World War II Memorial in Washington, D.C., May 16, 2019. Dole, who was medically discharged as a captain after being severely wounded in WWII, was promoted to colonel. (Sean Kimmons/DOD)

Former Sen. Bob Dole shakes hands with Lt. Col. Michael Lind with the Army's G-1 office during Dole's honorary promotion ceremony at the World War II Memorial in Washington, D.C., May 16, 2019. Dole, who was medically discharged as a captain after being severely wounded in WWII, was promoted to colonel. (Sean Kimmons/DOD) 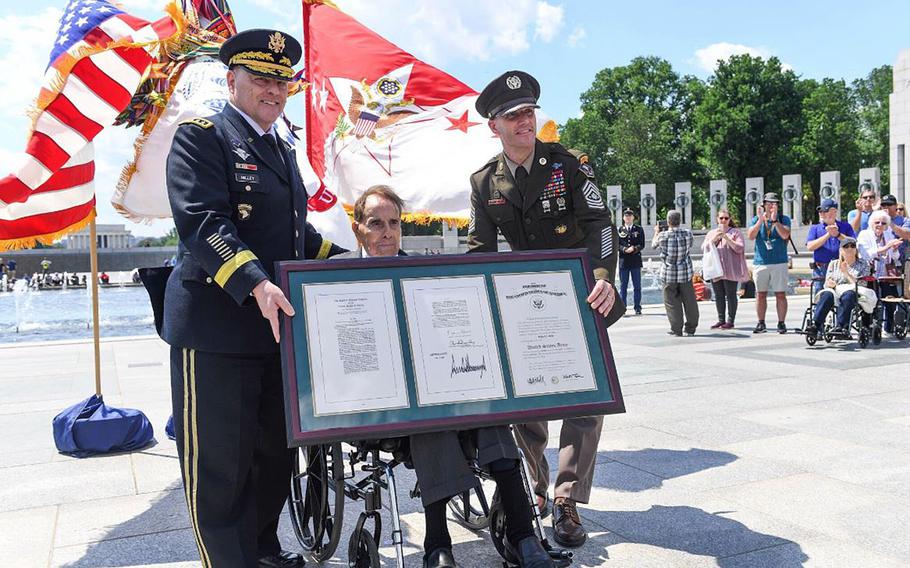 Former U.S. senator Robert Dole was promoted to the honorary rank of colonel in a ceremony presided over by Army Chief of Staff Gen. Mark Milley, at the World War II Memorial on the National Mall, May 16, 2019. At right is Sgt. Maj. of the Army Daniel A. Dailey. (Twitter/Gen. Mark Milley)

Former Sen. Bob Dole was promoted from Army captain to the honorary rank of colonel during a ceremony Thursday at the World War II Memorial in Washington, becoming the third and only living recipient of such an honor in the service’s 244-year history.

Dole, 95, enlisted in the early years of U.S. involvement of WWII and was commissioned as a second lieutenant before shipping off with the 10th Mountain Division to Italy.

There he was shot in the back by a German machine gun while he attempted to rescue an injured radioman during an assault on an enemy position.

He spent years recovering in a military hospital, Army Chief of Staff Gen. Mark A. Milley said during the ceremony attended by family members, military officials and dignitaries, as well veterans visiting the memorial as part of an Honor Flight.

Dole last wore the Army uniform in 1948 but continued to serve out of uniform for the next seven decades, Milley said. Dole, a recipient of two Purple Hearts who was twice awarded the Bronze Star Medal with Valor, never regained full use of his right arm.

The native Kansan served the state for more than three decades in the House and Senate and unsuccessfully challenged President Bill Clinton for the presidency in 1996 as the Republican nominee. He later headed the campaign that raised nearly $200 million to build the WWII memorial, where Milley said he often spends time greeting fellow war veterans.

“Bob Dole raised his right hand in 1942 and swore an oath to the Constitution,” Milley said. “He again raised his right hand on 14 April 1945 to rally his soldiers and lead the attack ... and because of his injuries he received that day, Lt. Dole lost the ability to raise that very right hand that he swore the oath with. But a man like Bob Dole will never be put down.”

In December, Dole was seen rising from his wheelchair and rendering a left-handed salute to the late President George H.W. Bush, who was lying in state in the Capitol rotunda. Images of the final salute by one WWII veteran to the last president to have served in that war spread widely.

Only two other Army officers have ever received an honorary promotion of any kind, Milley said. They are President George Washington, who was made honorary General of the Armies of the United States on the country’s bicentennial in 1976; and American explorer and governor William Clark, who was posthumously promoted from lieutenant to colonel in 2001 by Clinton. Clark joined Meriwether Lewis on an expedition to the Pacific Ocean in the early 1800s,

In early April, President Donald Trump authorized Dole’s honorary promotion, which had been pushed through the House and Senate by lawmakers from Dole’s home state. The Kansas House and Senate delegation were present at the ceremony, along with Secretary of State Mike Pompeo, a former Kansas congressman and Army officer.

Milley, along with Sergeant Major of the Army Dan Dailey — dressed in the new Army uniform resembling the WWII-era “pinks and greens” — presented Dole with a framed promotion warrant and a copy of the signed bill. Shortly beforehand, Milley asked the former senator if he was ready to be promoted.

“I’m ready,” Dole said, while seated in his wheelchair in front of U.S. and Army flags.

The honorary promotion will have no effect on his military benefits. Milley told him it would take another act of Congress to get him a pay raise.

Later, Dole tweeted that he became a “full bird colonel,” thanking the Army for the honor.

“God bless our men and women in uniform,” he wrote.