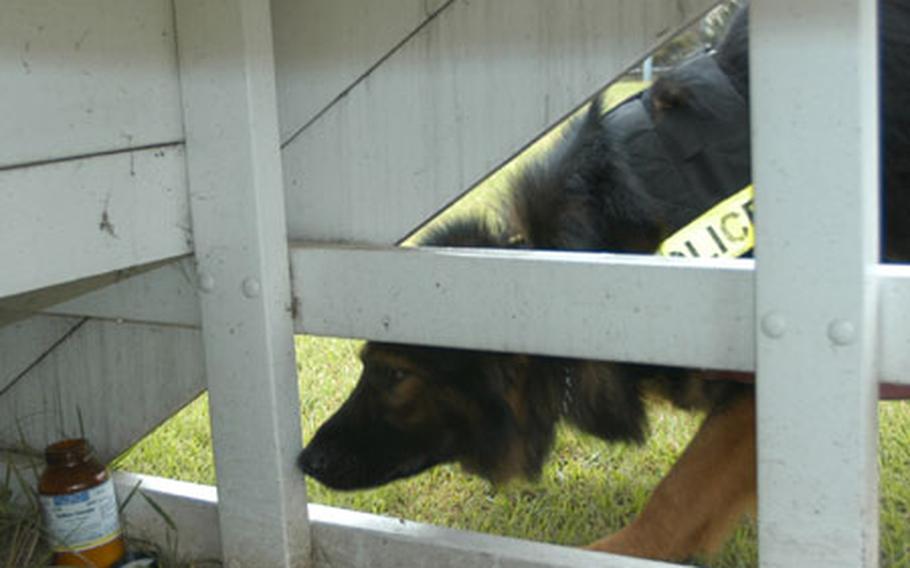 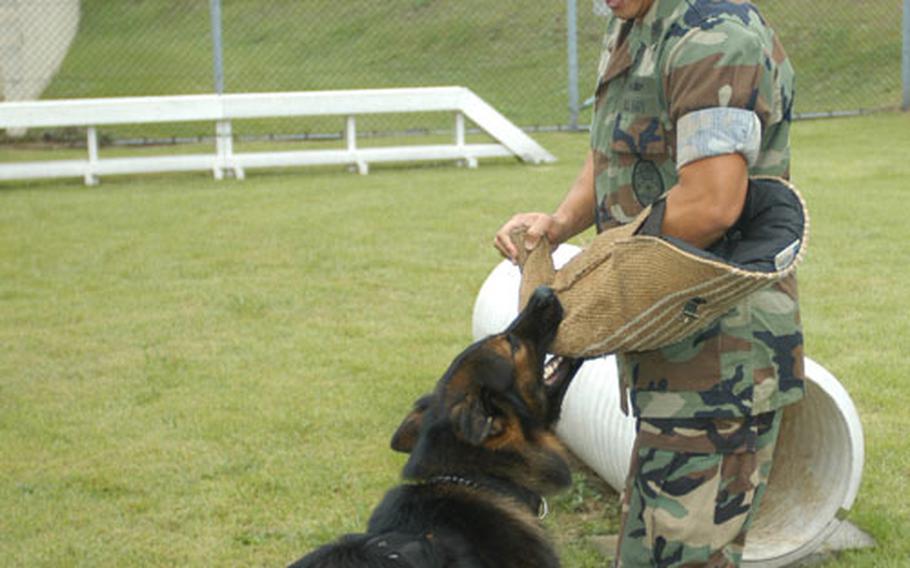 ATSUGI NAVAL BASE, Japan &#8212; Boetzo&#8217;s big pink tongue belies a ferocity that could stop an unruly drunk with a swift chomp, or a nose so sensitive it could sniff out an explosive.

Boetzo and the handful of military police dogs in Atsugi&#8217;s Security K-9 division have incredible pedigrees, training and dedicated handlers. Some are trained to find explosives; others, drugs. They also can do routine patrol duties such as stopping a suspect in his tracks with a mean bite.

At a handler&#8217;s request, the dogs can chase, stop, guard and escort a suspect using a bite or their considerable body strength. They don&#8217;t attack; it&#8217;s much more sophisticated than that.

The dogs use controlled force, unlike a shot from a gun, which can&#8217;t be controlled.

They also serve as a peaceful deterrent.

Atsugi&#8217;s canines, like most military dogs, are born in Germany and Belgium and trained at Lackland Air Force Base in Texas. They spend six weeks in patrol training followed by at least as long in specialized training.

The dogs use passive responses &#8212; they simply sit &#8212; unlike civilian working dogs that react in some way to gain their handlers&#8217; attention.

The dogs work for a reward, either a toy or a treat from their handlers. Dogs and handlers form a close bond, even if the dogs get a little rambunctious sometimes.

The dogs&#8217; handlers are always easy to spot on base.

Other clues: Dog hair on uniforms and muddy boots from the training course.

The dogs are pedigreed German shepherds and Belgium Malanois. Once trained, they&#8217;re worth more than $30,000, trainers said.

The dogs never play together but do have fun with their handlers, the handlers said.

The handlers, in one sense, may have it tougher.

They form a close bond with the dogs but when it&#8217;s time for a new duty station, they say goodbye.

The dogs are strong, highly trained law enforcers, but they still appreciate a scratch behind the ears.

And they might knock a few things off an office desk with an excited tail.

Still, the handlers say, they feel fortunate to have a job with animals.