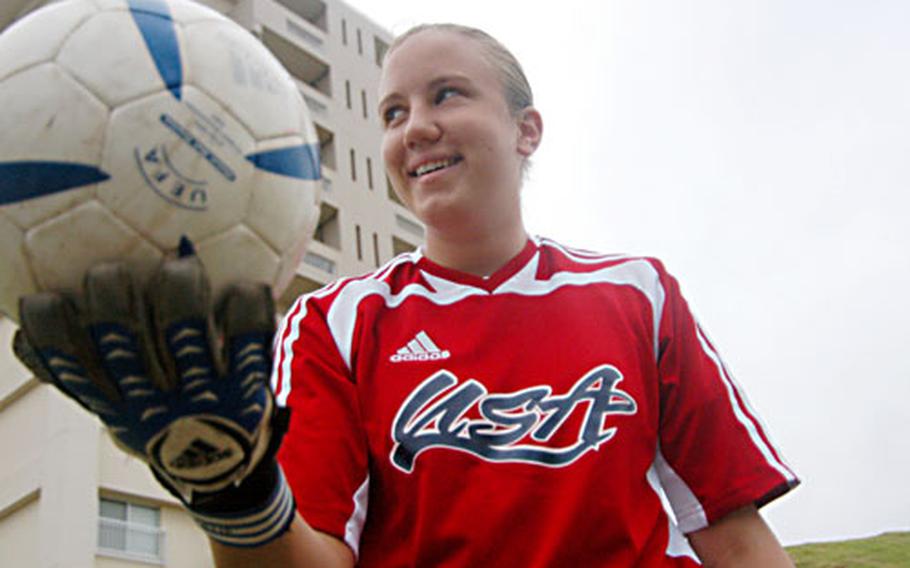 Seaman Kim Hemenway, 22, just returned to her job as a postal clerk on the USS Blue Ridge after playing soccer against Germany, South Africa, France, Holland and all branches of the U.S. armed forces. (Allison Batdorff / S&S)

YOKOSUKA NAVAL BASE, Japan &#8212; You eat salami for breakfast in the Netherlands. And everyone there calls it &#8220;football&#8221; instead of soccer.

But the game is an international language among those playing it, says Seaman Kim Hemenway, who just returned from the Netherlands to Yokosuka Naval Base after kickin&#8217; it with the some of the world&#8217;s best military soccer players.

Hemenway, 22, just returned to her job as a postal clerk on the USS Blue Ridge last week after playing soccer against Germany, South Africa, France, Holland and all branches of the U.S. Armed Forces.

The only female on the Blue Ridge team, Hemenway was chosen for the Navy/Marine/Coast Guard team in the Armed Forces Women&#8217;s Soccer Championship last month in Mayport, Fla.

She held the lowest military ranking, but that didn&#8217;t really matter on the field, she said.

The Americans placed third overall behind Holland and Germany in tournament games played on a small military installation in Zoutkamp, Netherlands. The Americans beat France (4-3), shut out South Africa (12-0) and tied Germany (2-2).

Hemenway was goalkeeper again but all was quiet on her end of the field, she said.

And, yes, she is watching the World Cup soccer games this week. Or trying to, as it&#8217;s hard on the ship and no games have been broadcast yet on the American Forces Network.