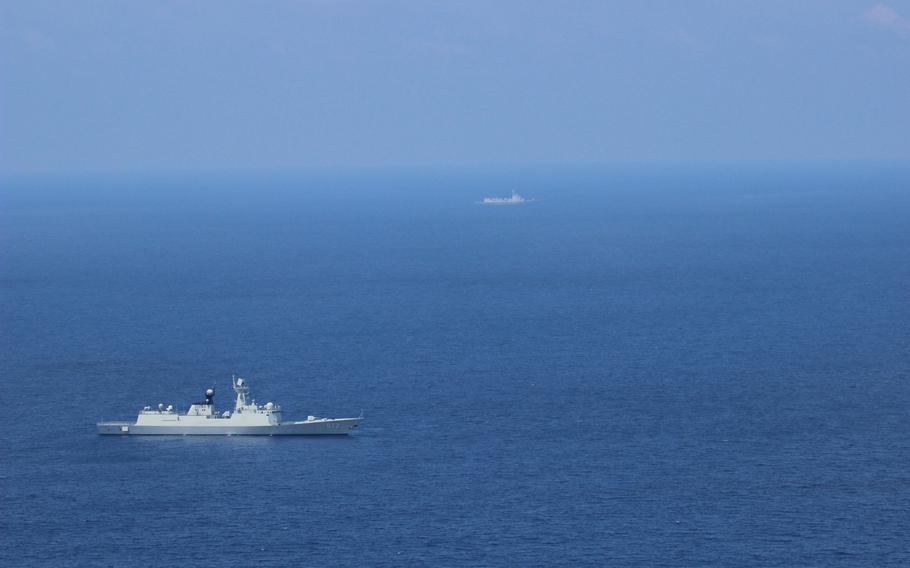 A Chinese navy vessel is seen from an MH-60 helicopter assigned to USS Blue Ridge as the U.S. Navy conducts flight operations in support of maritime security operations in the South China Sea. (U.S. Navy)

YOKOSUKA NAVAL BASE, Japan — A USS Blue Ridge-embarked helicopter photographed two Chinese navy ships May 5 near the site of a heavily contested shoal that has sparked a months-long standoff between China and the Philippines in 2012.

“There wasn’t any communication [with the Chinese] due to both Blue Ridge and its helicopter being a safe distance away,” Marks said.

Hull numbers in the Navy photos indicate the Chinese ships were the destroyer Lanzhou and the frigate Hengshui.

The visit near Scarborough was not a freedom of navigation operation, Marks said in response to a Stars and Stripes question.

In 2013, U.S. ships conducted such operations on China, Iran and 10 other countries in order to assert navigation rights in waters that the U.S. and many other countries consider international, according to an annual Defense Department report to Congress.

However, China’s views on what ships can do while transiting international waters differ from U.S. interpretations.

China maintains ambiguous claims to about 90 percent of the South China Sea through its “9-dash line” map, which shows dashes surrounding most of the sea. The Philippines filed a 4,000-page brief in international court on March 30 challenging the map, though China has declined to participate in the proceedings.

In 2012, a Philippine navy vessel attempted to arrest Chinese fishermen for taking coral and sea life from the Scarborough Shoal’s nearby waters, sparking intervention by Chinese maritime surveillance ships.

The standoff continued for months and sparked protests in both countries.

Scarborough Shoal lies within the Philippines’ exclusive economic zone, but China claims the shoal and the nearby Spratly Islands based on historical discovery.

The shoal, alternately referred to as Scarborough Reef, is about 430 miles from the Paracel Islands, where China and Vietnam currently have dozens of ships engaged in a standoff near China’s $1 billion deep water oil rig.

On May 7, Vietnam released purported video of Chinese ships ramming and firing water cannons at Vietnamese ships there. China claims Vietnam is the aggressor in the waters near the Paracels, which both countries claim.

Although both the Paracel and Spratly islands are mostly uninhabited, the energy reserves and fisheries in their nearby waters are believed to be extensive.