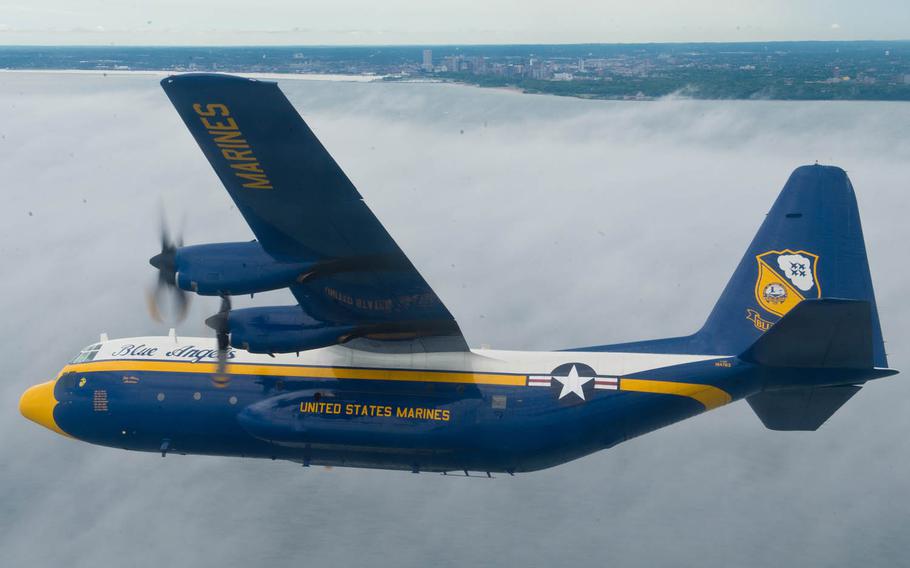 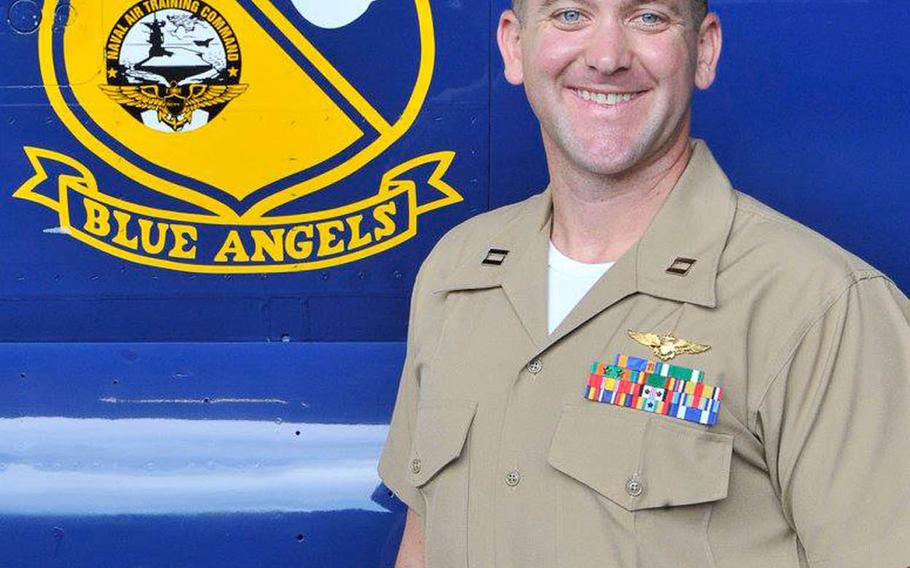 CAMP FOSTER, Okinawa — Marine Capt. Kyle Maschner hit one of the lowest points of his career a year ago when the Blue Angels had told him that he wasn’t good enough to join them.

The rejection by the elite air-demonstration squadron stung. As a young Marine officer in flight training, Maschner had decided to pursue a career behind the controls of the hulking KC-130J Hercules after watching the Blue Angels’ version, dubbed “Fat Albert,” during an air show at the team’s home base at Naval Air Station Pensacola, Fla.

Nearly a decade had passed since he saw the colossal blue-and-yellow beast lumber into the ether; he had amassed flight hours, deployed to Afghanistan in time of war and served as a flight instructor. It wasn’t enough — at least, not yet.

“They’re very honest and they’re very open in terms of ways you can improve yourself and make yourself more competitive for the team,” the 2006 graduate of Northern Arizona University said.

“They gave me some advice and they said, ‘Hey, here are some things you can do,’ or, ‘Here are some things that we see that we’re concerned about.’ So you can either take those things and be closed-minded and say, ‘No, that’s not me. I’m not going to do that,’ or you can go, ‘Wow. All right. This is how I’m perceived. All right, I need to change this; I need to change this.’”

Some might have folded or moved on. The pilot from Okinawa’s 1st Marine Aircraft Wing just worked harder and came back stronger.

“I took their recommendations and when I came out here, I just tried to do what I could to be a better Marine… and make improvements in my life, whether it was personal, whether it was work, whatever it is,” he said.

It worked. Maschner was selected on July 16 to fly Fat Albert for the Blue Angels’ 2017 season and beyond, one of only eight elite Naval and Marine Corps officers chosen for the team this year by Navy leadership. He was at an airport in Dallas to fly back to Japan when he got the news.

“It’s overwhelming,” said Maschner, who will be one of only three pilots responsible for flight demonstrations and transporting supplies, gear and personnel from show to show. “If you want something, keep going for it and never give up.

“It’s an honor; it’s a privilege that my peers — that the team — thought so highly of me that they said, ‘Hey, we want you to be on the team,’” he said. “It definitely hasn’t sunk in yet.”

No one was cheering louder for him than the people he has served with and met along the way.

“The Blue Angels have gained a committed Marine Corps officer who is an exemplary model for the Navy and Marine Corps team,” Capt. Sean Purcell wrote in an email to Stars and Stripes. Purcell, an officer in future operations/forward air controller with 1st Battalion, 1st Marines, has known Maschner since their junior year at Northern Arizona University in 2004-05. They roomed together senior year and attended officer candidate school together.

“He will undoubtedly show the American people the caliber of men our generation has given to protect this country,” Purcell said. “Kyle’s selection to the Blue Angels is an example of fulfilling one’s dreams by waking up every day and accomplishing your goals.”

Maschner’s path to the Marine Corps is a familiar one. The son of a nurse and a police officer was in college when terrorists attacked on Sept. 11, 2001. He was passionate about aviation and had always wanted to be a Marine, so he and a recruiter came up with a plan.

He joined the Reserves and became a heavy equipment engineer with Bulk Fuel Company Charlie in Phoenix while he continued at Northern Arizona. Upon graduation with a degree in hotel and restaurant management, he was commissioned in the Marines as a second lieutenant.

He chose the C-130 in late 2007 after seeing Fat Albert, mostly because he liked heavy machinery and was amazed seeing an aircraft that size maneuver. He also liked that it was helmed by a team.

“Aviation, itself, I think is awesome,” Maschner said. “You are in control of something that can very quickly go out of control, and it happens very fast in any platform, but the C-130 requires an entire crew to employ that aircraft. You rely on so many people in there to make it happen.”

Maschner has traveled the world over flying the C-130. He is looking forward to being an ambassador for the aircraft he loves and the Marines in the Pacific.

“Kyle Maschner is perfect for the job,” said his boss, Col. David Krebs, chief of staff for 1st MAW. “Not only is he a great KC-130 pilot, he is a great representative of the Marine Corps and Department of the Navy. I have no doubt he will do great things during this assignment. The Blues really picked a good one.”