Bloodied by history, Kurds fret over an uncertain future 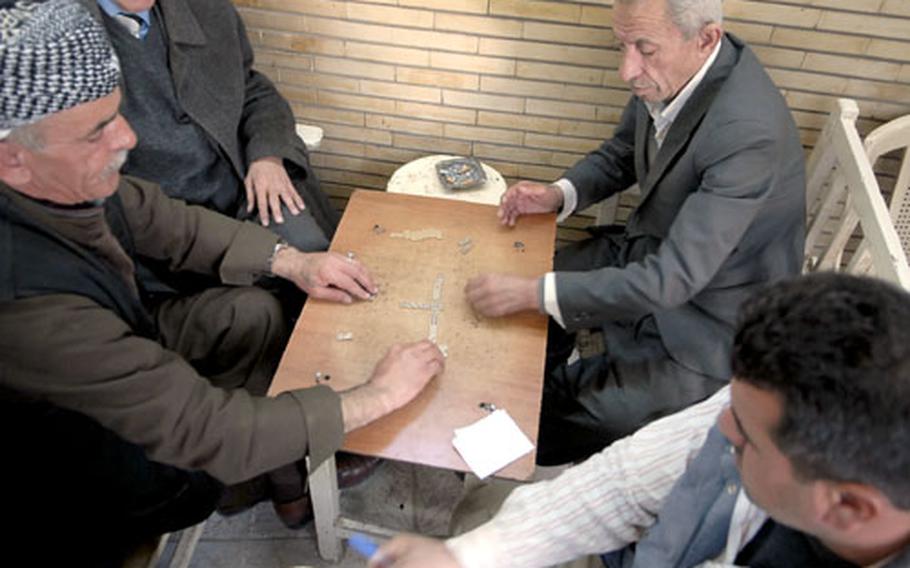 Men play dominoes at one of Irbil’s ubiquitous tea shops, many abuzz with political chatter. Many Kurds say they are deeply concerned about their future and are critical of both the Arab-dominated central government and Kurdistan’s semi-autonomous regional government. (Heath Druzin / S&S) A Kurdish singer belts out a mournful tune during a memorial ceremony in Halabja commemorating a 1988 chemical attack by Saddam Hussein&#39;s forces on that town and surrounding areas that killed as many as 5,000 people. (Heath Druzin / S&S)

After years of relative peace, a U.S. withdrawal is in sight, and this time there won&#8217;t be a no-fly zone as a buffer between the three provinces in northeast Iraq that make up Kurdistan and &#8220;The South,&#8221; as many Kurds call the Arab-majority provinces.

Under the placid veneer of Kurdistan&#8217;s modern cities and mountain villages, Kurds are racked with fear of enemies &#8212; foreign and domestic &#8212; and an uncertain future, and worries that two prominent families are twisting the region&#8217;s burgeoning democracy into a corrupt oligarchy.

Most Kurds are quick to point out how different Kurdistan is from the rest of Iraq. For starters, the region enjoys a large degree of autonomy and is run largely by the Kurdish Regional Government (KRG). But Kurds are also ethnically distinct from their Arab neighbors, speak a different language and have a very different culture that tends to be more westernized. Even the landscape is different, with soaring, snow-capped mountains and rolling green farmland cutting through much of the area.

They also have a uniquely blood-soaked recent history that has left many Kurds constantly worried of a repeat of past atrocities. Up to 180,000 Kurds were killed in Saddam Hussein&#8217;s genocidal Anfal campaign in 1988, which included chemical weapons, and stories of imprisonment and torture are rampant among Kurds.

&#8220;History should feel guilty about what it did to us,&#8221; said Kirmanj Aizat Suliman, mayor of the city of Soran, in Irbil province.

An anomaly in the Muslim world, many Kurds openly identify with the Jewish state of Israel, a fact often used against them by Arabs in the region.

Many Iraqi Arabs, though, say Kurds also share the anti-Arab feelings of many Israelis, and say Kurdish forces commit their own abuses against Arabs, including harassing them at checkpoints. Kurdish officials disavow the claims but don&#8217;t hide their distrust of their Arab neighbors.

Unlike most of Iraq, where sentiment is heavily against continued U.S. troop presence, many Kurds not only want the United States to stay, they want a large base built in Kurdistan as well as a U.S. Consulate. With an American presence, they say, no one will dare repeat the abuses of the past.

Nowhere in Iraq do U.S. forces receive a warmer welcome than Kurdistan, which includes Dohuk, Irbil and Sulaymaniyah provinces. Members of the U.S. Army 4100 Border Transition Team, who are responsible for the entire region, mostly roll in sport utility vehicles and often walk the streets of Irbil without body armor.

The U.S. military devotes few resources to Kurdistan, largely because there has been so little violence there. Fewer than 100 troops, not counting Special Forces, are stationed in the three province area.

Raouf Maulud, a border police major in Irbil province, said the Kurds can rely on a very short list of allies.

&#8220;We are looking to God first, America second,&#8221; he said, a statement echoed in several other interviews.

Being in that lofty company worries people like U.S. Army Lt. Col. Michael Russell, who oversees much of the U.S. mission in Kurdistan. Unless something drastic happens, American troops are leaving by the end of 2011, as outlined in the status of forces agreement ratified by both Iraq and the U.S.

While the U.S. has been busy quelling violence between Sunni and Shiite Arabs, animosity between Arabs and Kurds has grown and experts as well as Iraqis of all ethnicities worry about the possibility of violence, or even civil war. Much of the ill will stems from disputed territories with mixed Arab-Kurdish populations in Diyala, Kirkuk and Ninevah provinces, including the oil-rich city of Kirkuk.

Both the Kurdish and central governments claim the areas as their own and a long-delayed referendum to decide the issue is still in limbo.

Underlying these tensions is the Kurds&#8217; deep-seated desire for independence. Iraqi Kurds often consider themselves Kurds first and Iraqi a distant second, if at all.

But Kurdistan, in the Kurds&#8217; minds, is an arc of land that includes not only northern Iraq, but also parts of Syria, Turkey and Iran, all of which have their own restive Kurdish minorities. Any declaration of independence could potentially trigger a regional war &#8212; Turkey has already made several military incursions into Iraq to battle a militant Kurdish group &#8212; and put the United States in an unenviable spot between Turkey, its greatest regional ally, and the Kurds, its most supportive Iraqi allies.

Experts disagree on the likelihood of Kurds declaring independence, but most agree such a move would be fraught with problems.

Quil Lawrence, who wrote &#8220;Invisible Nation: How the Kurd&#8217;s Quest for Statehood is Shaping Iraq and the Middle East, said the Kurds have no plan to declare independence &#8220;in our lifetime.&#8221;

&#8220;They know it&#8217;s geopolitical suicide since none of the neighbors would allow it, fearing for their own Kurdish regions,&#8221; said Lawrence, who has covered Iraq for the BBC and Public Radio International for the past eight years. &#8220;Kurdish politicians all want their own country in their hearts, and they often end up caught between Arabs in the south who suspect their loyalty to Baghdad and their own Kurdish population in the north, which is sometimes more nationalist that realist.&#8221;

Part of Iraq, for now

Independence is a long-term goal, but Kurdistan will be part of Iraq for the near future, KRG Interior Minister Karim Sinjari said. But when asked what he thought of how Baghdad treats the Kurdish zone, the otherwise chatty Sinjari paused and gave a wry smile. He declined to answer, saying he did not want to offend the central government.

On the street, Kurds are generally supportive of independence but doubt it will happen soon.

For decades, Kurdish politics have been dominated by the Barzanis and Talabanis, families who have fought for Kurdish autonomy and led their people into a bloody civil war in the 1990s. KRG President Masoud Barzani and Iraqi President Jalal Talabani are at peace for now, Barzani leading the Kurdistan Democratic Party and Talabani leading the Patriotic Union of Kurdistan.

Barzani is both hailed as a freedom fighter and reviled as a traitor for joining forces with Saddam Hussein, easily the most hated man in Kurdistan, during the Kurdish civil war.

While Kurds enjoy wealth and safety relative to the rest of the country, they complain that electricity is still intermittent, even in urban centers like Irbil and Sulaymaniyah, and much of the countryside suffers from poverty and a growing refugee crisis as Kurds who fled the Hussein regime return home.

Omer, the government microbiologist, said the families running Kurdistan are plundering the people with impunity.