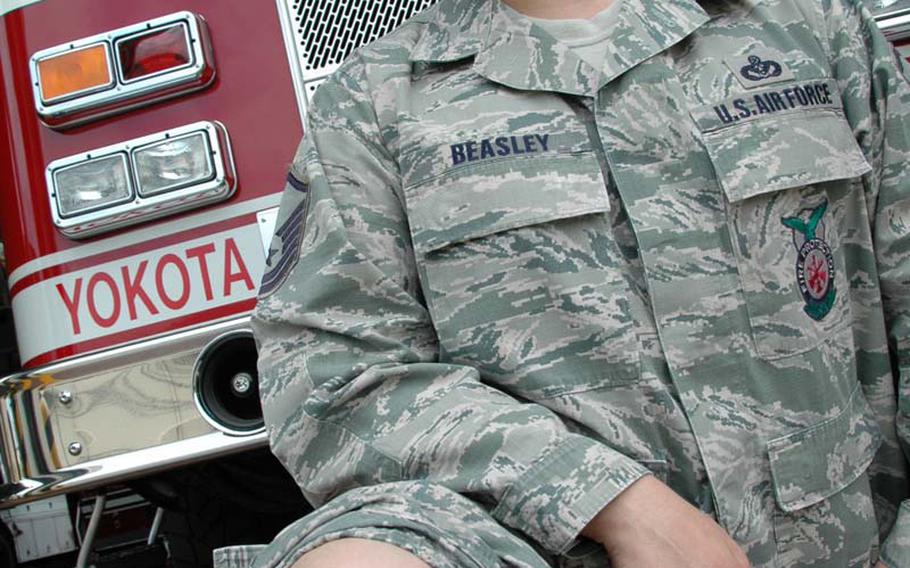 YOKOTA AIR BASE, Japan &mdash; Military doctors say a simple blood test may be able to identify people with a higher risk of tearing knee ligaments and that special exercises might help them avoid the serious injury that can lead to arthritis.

Each year, about 150,000 people in the U.S. suffer a torn anterior cruciate ligament, including many military personnel, athletes and others with physically demanding careers or pursuits. Treatment usually involves surgery followed by months of rehabilitation.

Often the injury happens not because of a rough tackle or a fall in combat, but due to a sudden change of direction while running, according to Lt. Col. Steven Svoboda, an orthopedic surgeon at West Point&rsquo;s Keller Army Community Hospital who is the head physician for the Army football team.

Svoboda, who tore his ACL while playing football at West Point, said his research team is studying four &ldquo;biomarkers&rdquo; &mdash; substances that accumulate in the blood due to wear inside the knee joint &mdash; to see if they are associated with ACL injuries.

The researchers looked at blood taken from 90 cadets entering West Point, half of whom went on to tear their ACLs while at the academy, he said.

&ldquo;We expected to see post-injury differences in biomarkers but were astonished that the biomarkers showed measurable differences months or years prior to injury,&rdquo; said Svoboda, who presented his findings last month at the annual meeting of the American Orthopaedic Society for Sports Medicine.

Now the researchers, aided by a $750,000 government grant to study ACL injuries at West Point over three years, are looking for preventive measures, Svoboda said.

&ldquo;If we can identify people predisposed to ACL tears, one day we may be able to prevent injuries before they occur,&rdquo; he said.

Blood samples are taken from cadets when they enter West Point. Researchers plan to analyze the samples taken from each cadet who injures an ACL during the next three years &mdash; estimated to be about 100 cadets &mdash; and compare the levels of biomarkers in their blood with others &mdash; matched by age, sex, height and weight &mdash; who do not hurt their knees.

Cadets also will be filmed jumping and landing when they arrive at West Point so researchers can assess whether there are problems with how they move that could lead to ACL injuries, Svoboda said.

The heavy toll of more than a decade of combat has seen a vast number of knee injuries among troops who have spent long hours hauling heavy equipment while training or going on missions in Iraq or Afghanistan.

&ldquo;When you look at the environment that soldiers and other active-duty personnel have been exposed to, they are carrying heavy equipment, and it takes a heck of a toll on your body,&rdquo; Svoboda said

&ldquo;In a war you think about gunshots and bombs causing penetrating trauma, but ACL and other major knee injuries are endemic and they are among the greatest risk factors for somebody getting separated by a medical board,&rdquo; he said.

Dallas native Master Sgt. James Beasley, 39, a fireman at Yokota Air Base in Japan, put off surgery for years after a football injury and is undergoing rehabilitation after having his ACL reconstructed in May using tendons from his hamstring.

&ldquo;In the fire department, if you have knee surgery, you get taken off of the trucks,&rdquo; he said, adding that he dealt with the injury through deployments to Pakistan, Afghanistan and the Middle East.

The military should consider testing potential recruits for elevated levels of biomarkers associated with ACL injuries, particularly if there&rsquo;s a way to intervene and lower the risk, Svoboda said.

Professional sports organizations, such as the National Football League, should also be interested in the ACL research, he said. A torn ligament can cost an athlete an entire season.

Gaetano Scuderi, an orthopedic surgeon at the Stanford University School of Medicine, is researching therapeutic treatments that may prevent the onset of arthritis in patients with ACL injuries. He said the biomarker discovery, while exciting, raises ethical issues.

The military has an extensive list of medical conditions that disqualify potential recruits for military service. The 1997 science fiction film &ldquo;Gattaca&rdquo; went a step further, with visions of a world in which people would be disqualified from certain jobs based on their genetic profiles.

For now, &ldquo;all we can tell is the susceptibility to injury,&rdquo; Scuderi said of the ACL research. &ldquo;There are lots of people who have the biomarker who are susceptible to it and just don&rsquo;t stress their knee in the wrong way. Other people might have the best biomarkers in the world and they could still tear their ACL.&rdquo;

Svoboda said special exercises might help people whose biomarker levels suggest they may be prone to ACL injury.

&ldquo;Coaches and athletic trainers of the future may help athletes with high biomarker levels reduce their risk of ACL injury by improving their balance and motor control or correcting how they jump and land,&rdquo; he said.

The research also has implications for the study of post-traumatic arthritis because about half of those who tear an ACL go on to develop the painful condition, Svoboda said.

&ldquo;The real scourge for the military is a much higher incidence of arthritis even of servicemembers in their upper 20s and early 30s,&rdquo; he said. &ldquo;The rates are clearly higher than in the civilian population.&rdquo;

A study published last year in the journal Arthritis and Rheumatism said military doctors diagnosed 108,266 cases of mechanical degenerative arthritis, or osteoarthritis, in 1998-2008. Arthritis rates were 26 percent higher in servicememembers ages 20 to 24 than in the general population. Troops over age 40 were more than twice as likely to develop the ailment as civilians, according to the study.

Svoboda said there is potential to examine the long-term progress of West Point cadets who suffer ACL tears to see whether they develop arthritis.