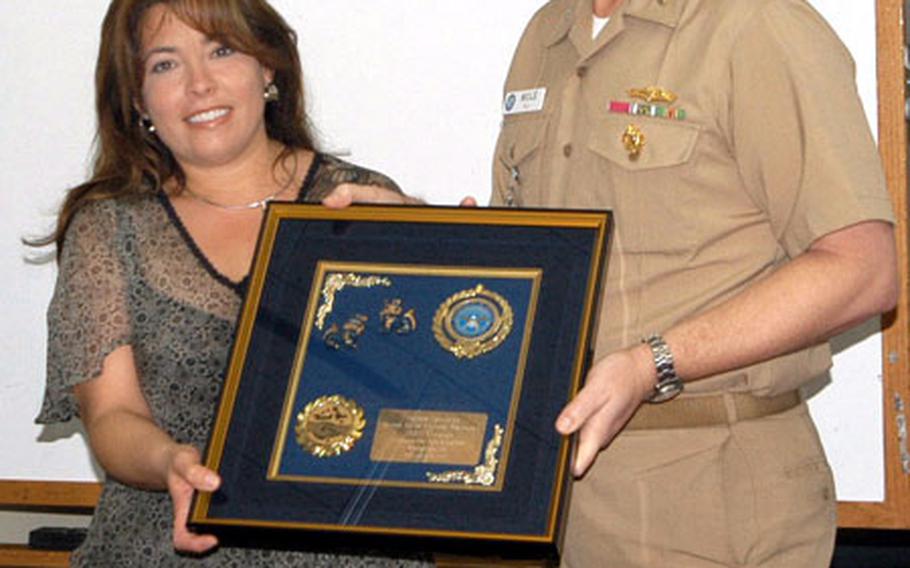 Mayra Kent, a volunteer with the 18th Medical Group from Kadena Air Base, receives the 2003 Civilian Award of Excellence from Capt. Dale Molé, the executive officer of the U.S. Naval Hospital Okinawa. Kent received the award for coordinating a bimonthly blood drive at the 18th Medical Group that benefits the Armed Services Blook Bank. (Courtesy of the U.S. Naval Hospital Okinawa)

CAMP LESTER, Okinawa &#8212; The Armed Services Blood Bank Center recently handed out two new awards, one to a unit and one to an individual, for going the extra mile in helping collect donations on Okinawa.

She said the unit&#8217;s monthly blood drives always have a big turnout. At a recent drive, 70 of the unit&#8217;s 100 Ordnance Maintenance Company Marines showed up and 60 units were collected.

Dallachie said there are two reasons why his Marines show up at the blood drives: his offer of a day off for anyone who donates and his personal story.

While a day off may sweeten the deal, Dallachie said his Marines give because it&#8217;s the right thing to do.

He said some who donated in August are just now using their day off, and some don&#8217;t want a free day for giving.

The other reason he thinks his Marines donate is because he tells them how he survived the Oct. 23, 1983 Beirut barracks bombing that killed 241 Marines, sailors and soldiers.

When the truck bomb hit the barracks, Dallachie was in his room with three other Marines. He was the only one in the room to survive.

He said he suffered broken bones and internal injuries and only lived because of donated blood and a Marine who knew CPR.

Two hours after the blast, he was on the USS Iwo Jima, watching as blood was pumped directly from volunteers into his fellow wounded troops.

Because of that, he stresses the importance of blood donations and requires his Marines to be CPR qualified.

&#8220;I had given blood before the bombing, about three or four times, but it definitely changed my view about [blood donation],&#8221; he said.

Mayra Kent said she helps because she feels it&#8217;s the right thing to do.

Kent also rewards donors, but instead of days off, she fills their stomachs. She said she&#8217;s Hispanic and loves to cook, so for every bimonthly drive she helps coordinate, she cooks a feast for those who donate.

Her first four drives featured Mexican dishes; then she tried her hand at Italian fare and a barbecue with a Texas flare.

Kent said she&#8217;s always been a blood donor, but this is the first time she&#8217;s helped on the other side. She is part of the 18th Medical Group spouses club and had the chance to help organize the drives when the prior person in the position moved.

Leavitt said Kent&#8217;s drives are popular not only because of the food, but the atmosphere.

Kent said in addition to the food, she has music playing to give the drive a festive feel. She said people don&#8217;t mind waiting an hour or more, when they&#8217;re having fun.

Kent said she&#8217;s moving back to America soon, but after her experience here, she wants to stay involved with blood drives.

Leavitt said the ASBBC has collected almost 4,000 units of blood this year, and it wouldn&#8217;t have happened had it not been for the 3rd MRB and Mayra Kent.