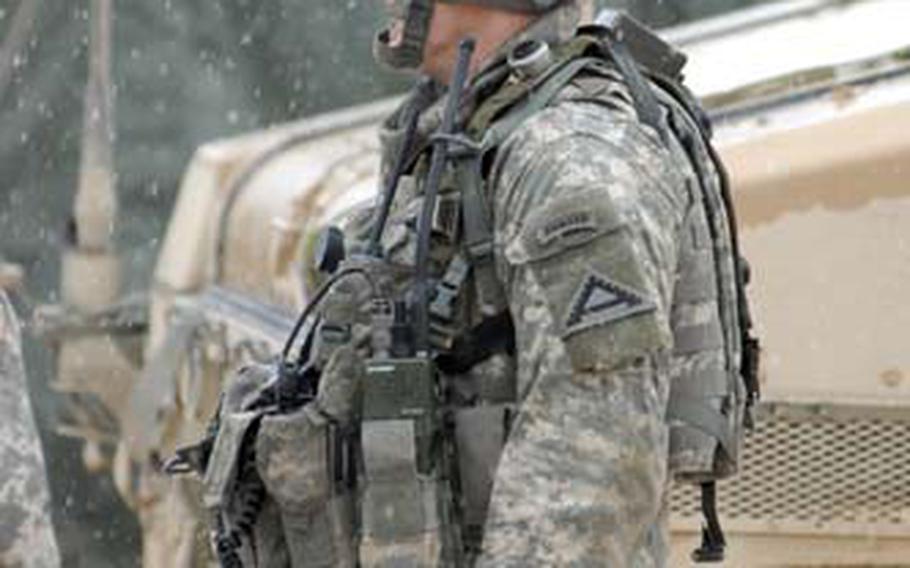 HOHENFELS, Germany &#8212; A blizzard raged at Hohenfels when The Box went "hot" on Wednesday morning.

The Box is the training area at Hohenfels and "went hot" meant play had started in a mission-rehearsal exercise that will prepare soldiers for an upcoming mission to Afghanistan.

But hot was exactly the opposite of what the Team Blackfoot soldiers experienced as they set off on patrols along icy tank trails looking for "the Taliban" or manned guard towers buffeted by snow flurries at several mock forward operating bases. Team Blackfoot is a task force built around Company B, 1st Battalion, 4th Infantry Division.

Maj. Greg Cannata, who will be the senior 1-4 officer in Afghanistan when Team Blackfoot deploys, said the mock FOBs at Hohenfels replicate actual FOBs that the unit will occupy in southern Afghanistan&#8217;s Zabul province.

Six squads of fellow 1-4 soldiers are playing the Taliban during the Hohenfels training, and a company of Romanian soldiers is training alongside the U.S. personnel. In Afghanistan, 1-4 soldiers fall under a Romanian battalion responsible for securing the whole province, Cannata said.

The 1-4 soldiers have worked in the province for 2&#189; years, and some soldiers from the unit are deploying there for their third six-month mission, he said.

In recent months, 1-4&#8217;s Team Apache &#8212; which will be replaced by Team Blackfoot &#8212; has reported more insurgent activity including a lot more makeshift bombs, he said. Decisions have yet to be made on how an expected surge in U.S. troops in Afghanistan will play out in Zabul, Cannata said.

"There could be more troops from both the U.S. and Romania (sent to Zabul)," Cannata said, adding that the Romanians have assigned a brigade commander to the province.

At "FOB Mizan," a collection of tents surrounded by wire and guard towers inside The Box, soldiers from Team Blackfoot&#8217;s 3rd Platoon got ready for their first mission on Wednesday morning.

One of them, Spc. Joel Vazquez, 24, of Lancaster, Pa., a mechanic, expects to work long hours fixing vehicles damaged by harsh off-road driving in Zabul. "For the last four days we&#8217;ve done suspensions, transmissions and engines. They said they (the vehicles) carry big loads so it wears the suspension a lot," he said.

Spc. Robert Berard, 32, of Springfield, Mass., expects some hard patrols carrying 80 pounds of ammunition and weaponry into the mountains as an assistant M-240 machine gunner. "Yesterday was the longest and hardest (patrol) I&#8217;ve done so far. It was a 552-meter hill in the training area," he said.

Team Blackfoot will deploy to Afghanistan next month, Cannata said.