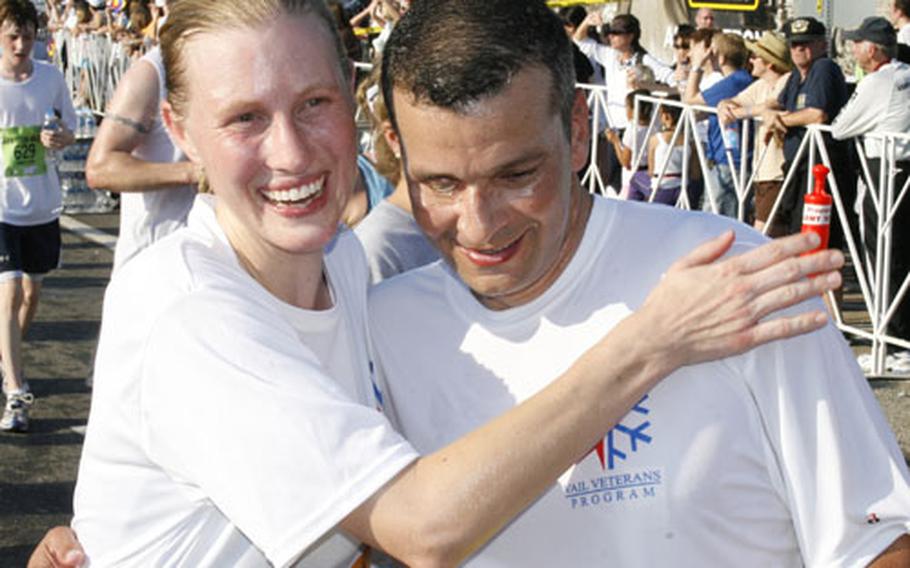 1st Lt. Juan Castro gets a hug from his running partner, Capt. Elizabeth Painter, after they finished the Army Ten-Miler. (Joe Gromelski / S&S)

For 1st Lt. Ivan Castro, running the Army Ten-Miler in 1:25 is pretty incredible.

Running it at all is a miracle.

To begin with, Castro, a former weapons sergeant in the 7th Special Forces Group with 17 years of military service, is totally blind.

He suffered multiple wounds, including the loss of his right eye, the loss of sight in his left eye, and his right index finger, in Iraq in September 2006, after a mortar hit the rooftop where he was providing fire support during a battle with insurgents.

Only 12 months ago, doctors questioned whether Castro would make it through another week, much less back into the Army, he said.

&#8220;This time last year, I was in bed in a hospital,&#8221; said Castro, who had tubes everywhere, a filter in his heart, monitors hooked up to anything that could be monitored, and a nerve block surgically installed to control pain so severe, the drugs necessary to control it would have left the soldier close to a coma.

But Castro himself had no questions.

There, in that hospital bed, he said, he set himself two goals to achieve within a year: run the Ten-Miler and the Marine Corps Marathon.

Castro traveled to the Washington, D.C., Ten-Miler from Fort Bragg, N.C., where he remains on active duty.

At Bragg, Castro trained for his two races with Maj. Phil Young, who was Castro&#8217;s team leader in the Special Forces.

Castro runs tethered to Young using two white shoelaces tied together. Young calls &#8220;audibles&#8221; as they move, warning Castro of possible hazards. But most of the guiding is done with the string, the men said.

With one race down, Castro said he is now focused on running the Marine Corps Marathon on Oct. 29.

Castro was just one of 28 running miracles participating in Sunday&#8217;s race that go by the name Missing Parts in Action.

The team, which is made up of military amputees and their physical therapists, began participating in the Ten-Miler in 2004 as the brainchild of Army Maj. David Rozelle, who lost his right foot to an anti-tank mine in Iraq in June 2003.

Rozelle made headlines around the world after the Army declared him fit for duty, gave him command of the 3rd Armored Cavalry headquarters unit, and sent him back to Iraq &#8212; just one year after he lost his foot.

He was the first amputee in recent military history to resume a dangerous command in the field.

For many of the MPIA team members, the Ten-Miler race is an opportunity not just to celebrate their own return to health and the military community, but also remember those who haven&#8217;t made it yet &#8212; or never will.

Capt. Wesley Knight, an active-duty Army officer who has had a partial hand amputation, told reporters Friday that crossing the finish line &#8220;will probably be pretty emotional.&#8221;

Audio clips:Lt. Castro discussed what it was like to run his first Army 10-Miler blind

Castro&#39;s wife is very proud of her inspirational husband