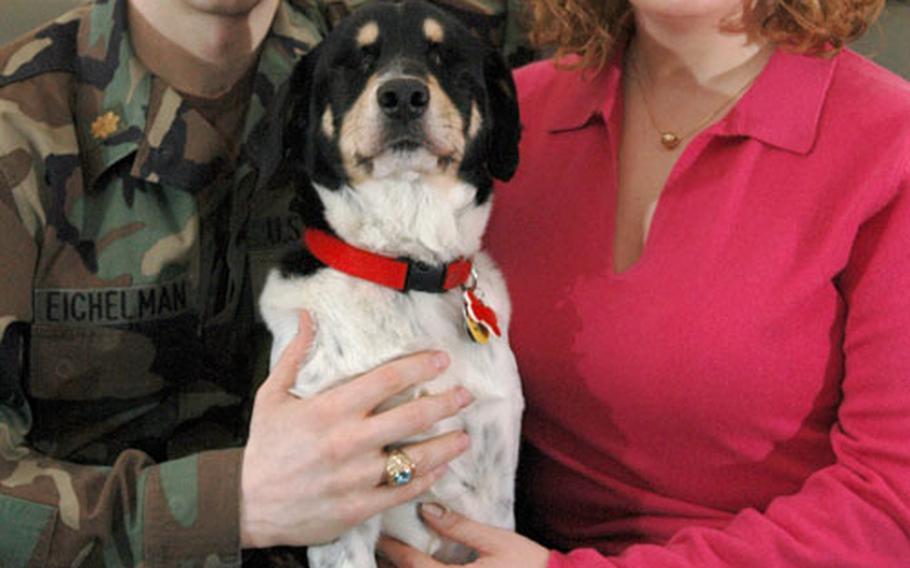 The Eichelmans pose for a portrait with Toby. (Raymond T. Conway / S&S)

The Eichelmans pose for a portrait with Toby. (Raymond T. Conway / S&S) 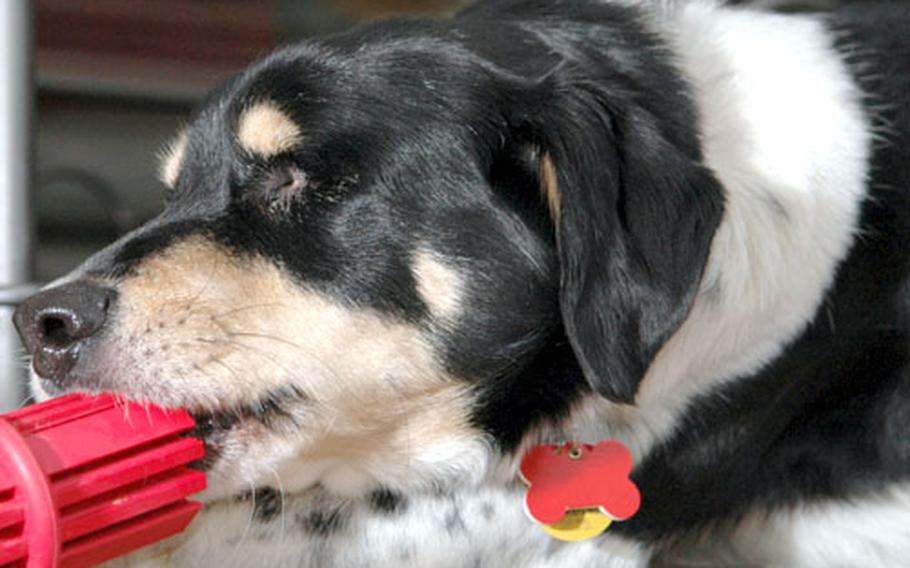 Toby, a border collie mix who was born with no eyes, plays with his favorite chew toy in Mannheim, Germany, on Tuesday. Toby — who belongs to Maj. Mark Eichelman and his wife, Paige, of Mannheim — was recently voted the 2004 Great American Mutt. (Raymond T. Conway / S&S)

The mutt was covered with frost and grime and had a mouthful of broken teeth. There were empty red spots where its eyes should have been.

It was led into the animal shelter by a man using a horse rope. He&#8217;d found the dog wandering in a frozen field.

The dog spent a month on doggy death row, simpering and chewing on his cage, little tears trickling from empty eye sockets. Would-be adopters recoiled at the sight of the mangy mutt.

Every dog has his day.

Toby, now the adopted son of Army Maj. Mark and Paige Eichelman of Mannheim, Germany, has been voted the 2004 Great American Mutt.

The border collie mix was picked from 1,506 mutts entered in a contest sponsored by Tails in Need Inc., a New York City-based foundation that seeks to raise education on adoption of animals. Judges narrowed the field to 12 semifinalists and five finalists before 5,700 online voters chose Toby as the No. 1 mutt.

Toby received 42 percent of the 13,565 total votes to defeat Lucky, a terrier-dachshund mix from California with huge ears, and three other finalists. The results were announced Dec. 16.

Toby, who is thought to be 4 years old, has come a long way from that day last January when he was found in a field near Charlottesville, Va.

Paige Eichelman was working at the Charlottesville-Albemarle Society for the Prevention of Cruelty to Animals while her husband attended classes at the University of Virginia. The Eichelmans already owned a dog, a cat and a horse, and knew they&#8217;d be moving to Germany in June.

&#8220;The prospect of adding another animal to the mix and transporting it halfway around the world &#8212; I was not thrilled at the idea,&#8221; said Mark Eichelman, now the officer in charge at the Mannheim Law Center.

But Paige went to work behind her husband&#8217;s back, arranging for the dog to be neutered as well as an operation to close its eyeholes to prevent infection. The veterinarian told her the dog had been born with no eyes.

Mark eventually agreed to a 48-hour trial run for Toby, which the dog failed miserably. He broke through the baby fence in the Eichelman&#8217;s kitchen and proceeded to chew up carpet, a pair of ski pants and the electrical cord of an antique clock.

Eventually, Toby learned how to avoid a trip back to the pound. He now veers around furniture as if guided by radar and makes friends by licking faces. Even Dixie, the Eichelman&#8217;s 13-year-old shepherd-husky, and Gertrude, their 17-year-old cat, have welcomed their blind buddy.

As champion, Toby has won a watercolor portrait of himself, a best-of-show ribbon and pet supplies. He&#8217;ll also be featured in books and magazines about animal adoption.

Best of all, the Eichelmans say, is that the Charlottesville-Albemarle SPCA has started the Toby Fund, an endowment with a goal a $300,000 to pay for adopt-a-pet education as well as surgeries on handicapped strays.

For more information on Tails in Need Inc., see www.tailsinneed.com.