Blast in Afghan capital sparks concern ahead of presidential inauguration 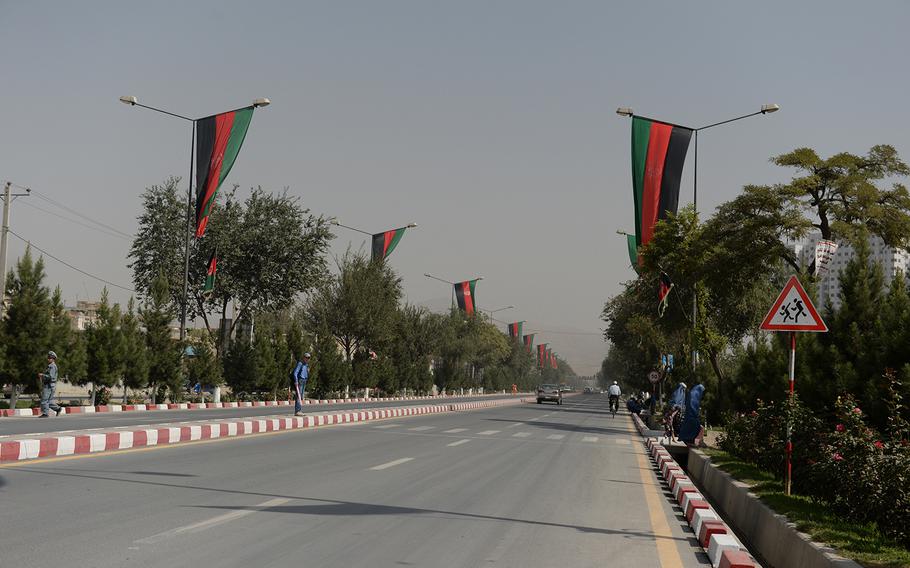 Buy Photo
Afghan flags line Airport Road in Kabul on Sunday, Sept. 28, 2014 ahead of Monday's presidential inauguration ceremony. Ashraf Ghani will be sworn in as the new head of state after a bruising five-month electoral battle. (Jad Sleiman/Stars and Stripes)

Buy Photo
Afghan flags line Airport Road in Kabul on Sunday, Sept. 28, 2014 ahead of Monday's presidential inauguration ceremony. Ashraf Ghani will be sworn in as the new head of state after a bruising five-month electoral battle. (Jad Sleiman/Stars and Stripes) 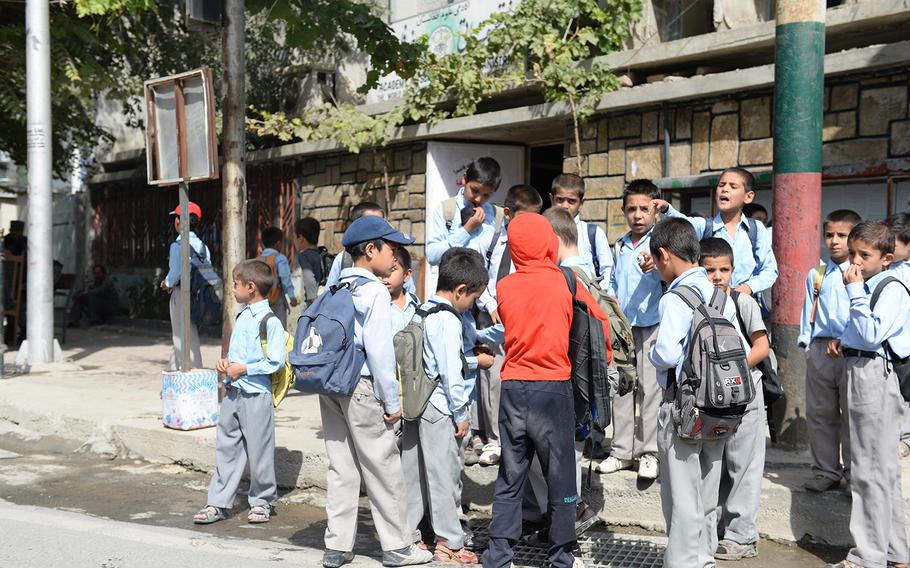 Buy Photo
Afghan school children gather around the site of a magnetic bomb attack that injured the driver of an Afghan military vehicle outside the presidential palace in Kabul, on Sunday, Sept. 28, 2014. The blast sparked concerns that insurgents would try to disrupt Monday's swearing-in ceremony for Ashraf Ghani, Afghanistan's new president. (Jad Sleiman/Stars and Stripes) KABUL, Afghanistan – A small explosion under a military vehicle in the diplomatic quarter here raised jitters ahead of Monday's inauguration of Afghanistan's new president, Ashraf Ghani.

The Sunday morning blast, caused by a magnetic device attached to the underside of a truck, injured the driver, authorities said. It prompted concern that Taliban insurgents would seek to disrupt the swearing-in ceremony. Ghani will replace current President Hamid Karzai after a contentious months-long election process.

The explosion came despite a massive security operation in Kabul before the inauguration, in which schools, universities and government offices were closed.

Ghani, 65, will be sworn in as Afghanistan’s second president since the ouster of the Taliban in a U.S.-led invasion after the Sept. 11, 2001, terrorist attacks. Karzai has served out his second term and was barred by the constitution from standing in this year’s presidential ballot.

Monday's ceremony will also see the naming of Abdullah Abdulah, 54, a former foreign minister and runner-up in the election, to the newly created position of chief executive, a post similar to prime minister.

Abdullah and Ghani had been locked in an acrimonious, five-month-long deadlock over the results of the election, which has been described as being marred by “industrial-scale” fraud.

In a U.S.-sponsored compromise, the two agreed last week to share power in a government of national unity.

Both have pledged to immediately sign a bilateral security agreement with the United States that would allow nearly 10,000 U.S. servicemembers – mainly advisers and counterterrorism teams - to remain in the country after the withdrawal of all NATO combat troops in December. Afghan government officials and foreign diplomats said the accord would likely be signed on Tuesday.

About 1,400 Afghan and foreign guests have been invited to the ceremony, which is to be held in the heavily guarded presidential compound, government officials said.

On Sunday​, the White House announced that John Podesta, counselor to President Barack Obama, would lead the U.S. delegation. It was not immediately clear who would represent other foreign governments.

Plainclothes intelligence agents, as well as thousands of police officers and army troops, will be deployed to prevent Taliban insurgents from disrupting the ceremony.

Security ahead of the ceremony was tight even by the heavily militarized standards of Kabul, where massive blast walls and convoys of armored vehicles are a common sight and where hundreds of police officers armed with automatic rifles routinely patrol the streets.

The inauguration has been declared a public holiday, and schools and government offices have been closed in an attempt to ease the capital’s notorious traffic jams. Major roads in the city of 5 million people were closed, while helicopters clattered overhead.

Still, the capital had a festive air, with major thoroughfares and traffic circles festooned with Afghan flags.

Municipal workers have been cleaning the highway between the airport and presidential palace and decorating it with large black, red and green national flags.

Many Kabul residents said they were delighted that the inauguration was finally to take place. There had been concerns that tensions over the election could spark violence between the two camps.

"There was a hopelessness before the signing of the political deal. No one knew what would happen. But now it looks like the problems are solved,” said Ahmad Shoib, a fruit vendor who was watching the preparations.

Sardar Sahak, a visitor from eastern Ningrahar province, said that Afghanistan was more stable since the power-sharing agreement between Ghani and Abdullah, but that the situation was still “not good.”

"We hoped that we will have a very strong elected government" he said. “Now the government is formed through a deal, not through the votes of people, so there may be problems in the future between the two leaders.”