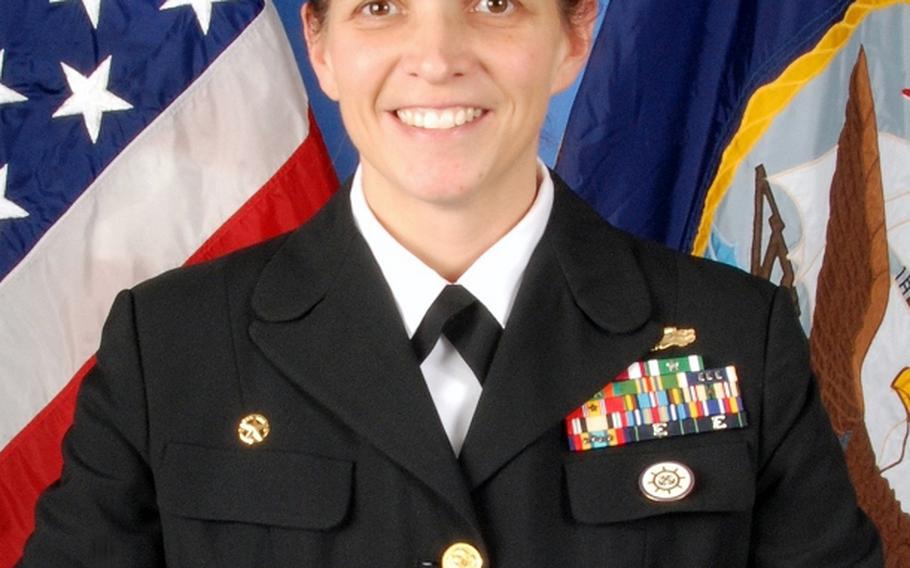 Cmdr. Jana A. Vavasseur was commanding officer of the USS William P. Lawrence, when a huge wave swept a helicopter off the destroyer on Sept. 22, 2013, killing two Navy pilots. U.S. Pacific Fleet commander Adm. Harry B. Harris Jr. blamed the accident on maneuvers by the destroyer. (U.S. Navy)

Cmdr. Jana A. Vavasseur was commanding officer of the USS William P. Lawrence, when a huge wave swept a helicopter off the destroyer on Sept. 22, 2013, killing two Navy pilots. U.S. Pacific Fleet commander Adm. Harry B. Harris Jr. blamed the accident on maneuvers by the destroyer. (U.S. Navy) 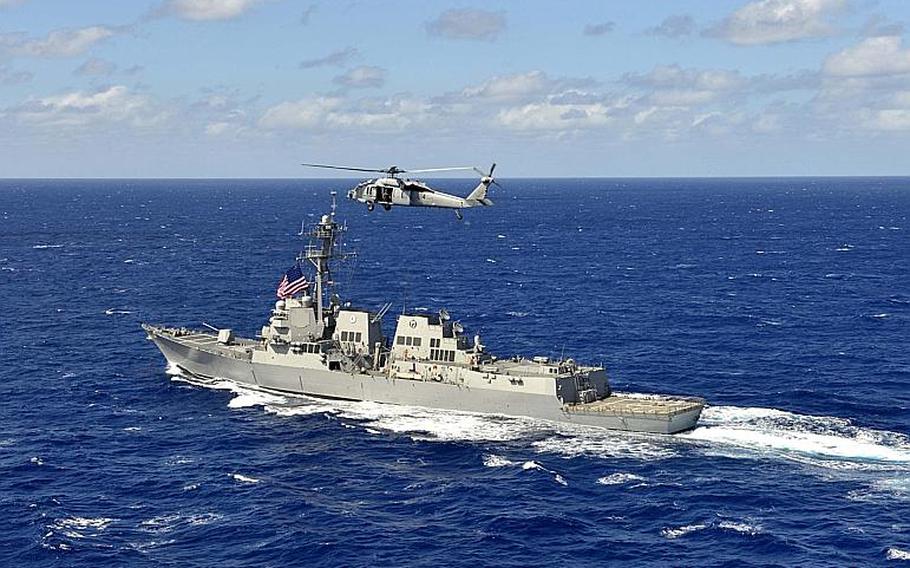 The USS William P. Lawrence transits the Pacific Ocean in 2013. Maneuvers by the guided-missile destroyer were to blame for an accident in which two Navy pilots died when their helicopter was swept overboard by a huge wave on Sept. 22, 2013, according to U.S. Pacific Fleet commander Adm. Harry B. Harris Jr. (U.S. Navy) 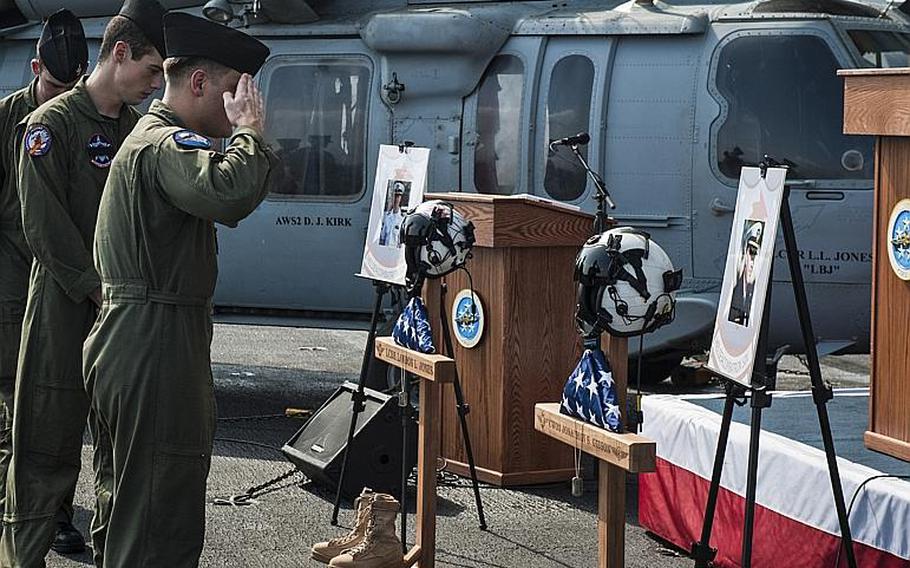 U.S. sailors pay their respects to Lt. Cmdr. Landon L. Jones and Chief Warrant Officer 3 Jonathan S. Gibson following a memorial service aboard the aircraft carrier USS Nimitz. Jones and Gibson were killed after a wave swept their helicopter from the flight deck of the USS William P. Lawrence on Sept. 22, 2013. (U.S. Navy)

NAPLES, Italy — After a wave swept a Navy helicopter and two pilots off the flight deck of a destroyer in the Red Sea last year, early reports described a freak accident caused by a “rogue wave.” But a recently released investigation points to the speed of the ship as it changed course, and the admiral overseeing the report has faulted the ship’s commander for the accident.

U.S. Pacific Fleet commanding officer Adm. Harry B. Harris Jr. also recommended the Navy review protocols for flight operations on “low freeboard” ships, or those with flight decks that are especially close to the water.

Navy pilots Lt. Cmdr. Landon L. Jones, 35, and Chief Warrant Officer 3 Jonathan S. Gibson, 32, died after their MH-60S helicopter broke its chains and slid off the flight deck of the USS William P. Lawrence on the afternoon of Sept. 22, 2013, the result of a large wave hitting the aircraft as the ship rolled violently. Both men were still inside the aircraft when it plunged overboard.

In a 10-page assessment of the investigation, which was released in April and recently made public by the Navy, Harris faulted a decision by the Lawrence’s commanding officer, Cmdr. Jana A. Vavasseur, to turn the ship immediately after the helicopter landed on the flight deck. Combined with the ship’s speed, the move put the vessel into rough “quartering seas,” he said, causing it to roll as large waves hit the deck.

Although the maneuvers followed protocol, they increased the risk of an accident because of the destroyer’s low freeboard, he wrote.

“There was time to rectify the situation by simply reducing speed after taking (the helicopter) aboard,” Harris wrote. “[A] significant reduction in speed, thereby creating a more stable platform, could have been achieved in seconds.”

The accident occurred as the Lawrence sped to rejoin the USS Nimitz Carrier Strike Group, with which it had deployed from Coronado. The helicopter, part of a logistics resupply for the Lawrence, landed on the flight deck at 12:37 p.m. At the time, the ship was on a course that placed wave impacts to its rear.

Immediately after the helicopter was chained, Vavasseur and the officer on deck turned the ship 60 degrees to change course. Rolls became more pronounced, according to the report, including one at 12 degrees to starboard. The ship then turned five more degrees, and the rolls worsened.

Around 12:44, the ship rolled 13.1 degrees to port and then 16.6 degrees to starboard. The chains attached to the helicopter tightened but held during the port roll, one officer told investigators. A wall of water then shot up on the starboard roll and struck the aircraft, witnesses said. The fuselage shook, the tail rotors struck the deck and the aircraft began to turn on the deck before falling off the port side.

The helicopter tail and rotor remained on the flight deck, as did both pilot doors. Rescue efforts over the next 26 hours combed an area of 100 square nautical miles with three destroyers, a replenishment ship, seven small boats and multiple aircraft. Searchers found debris, but they didn’t find the pilots.

Harris’ conclusions on the cause of the accident differ from those of investigating officers. They found that although the new course “likely put the ship in a position to experience the large rolls ... it was not reasonably foreseeable that such a large roll or rolls would occur.”

Protocol permits ship maneuvers to begin as soon as an aircraft is chained to the deck, a rule followed in the case of the Lawrence. The investigation also notes that the sea state — or the level of swells — was not considered dangerous at the time.

All other officers who reviewed the report agreed with investigators’ assessment, save Harris and the commander of Naval Air Forces, Vice Adm. D.H. Buss.

“In this evolution, a series of seemingly minor, innocuous misjudgments had a cumulative catastrophic outcome when graded by the harshness and unforgiving nature of operations at sea,” Buss wrote in his response to the investigation.

The Navy made an interim change to its helicopter operations procedure in February, requiring maneuvers stop altogether during operations on deck on a low freeboard ship. Harris also ordered a safety stand-down for all helicopter commands, frigates and destroyers before May 30, and he requested a Navy review of all past incidents involving waves striking flight decks.

He wrote that Vavasseur was “ill-served” by the lack of training and discussion within the surface warfare community on the perils of low-freeboard ships. He anticipated criticism for his recommendations, noting that some “will contend that my conclusion is unreasonable, perhaps even harsh and uncompromising.” Yet, he said, the final responsibility for a ship rests with its commanding officer.

“While procedural compliance is essential, the full scope of responsibilities in our profession extends beyond simple compliance and blind obedience — we require more,” he wrote.