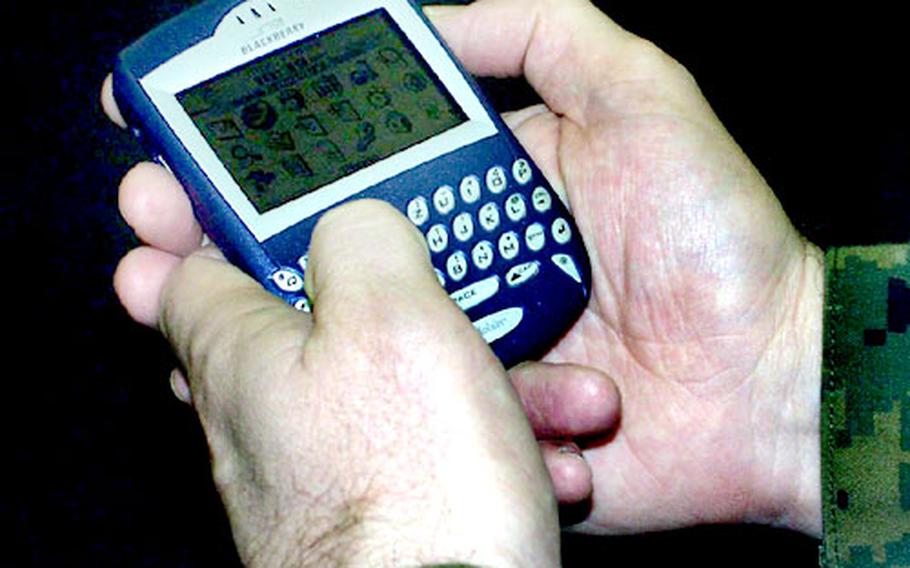 A Marine from Marine Corps Forces Europe Headquarters demonstrates the BlackBerry, a personal digital assistant that more than 30 Marines at the headquarters have been issued. The BlackBerry combines a cell phone, database manager, Internet access and e-mail functions. (David Josar / S&S)

STUTTGART, Germany &#8212; Now add a BlackBerry to a Marine&#8217;s equipment when he or she is working for Marine Corps Forces Europe Headquarters.

In the past year, roughly 35 Marines assigned to Marine Corps Forces Europe headquarters have been outfitted with BlackBerrys, a cutting-edge personal digital assistant that combines a cellular phone, Internet access, a portable database of names and contacts, and e-mail capability.

The BlackBerry is the size of a thin stack of index cards and sells on Amazon.com for $300 to $400 depending on the model.

&#8220;You don&#8217;t have to stay at your desk, because you always have your office with you,&#8221; said Marine Lt. Col. James E. Nierle, director of communications for Marine Corps Forces Europe, headquartered in Stuttgart.

The BlackBerry frees up users so they can do more than if they didn&#8217;t have the technology and had to stay at their desks, Nierle said.

Last week, for example, Nierle was traveling to the Netherlands, and he was able to access and respond to his e-mails while on the train.

Nierle said the command is hoping to increase the number of BlackBerrys it has in the next year.

Marine Maj. Tim Keefe, public affairs officer for Marine Corps Forces Europe, said that if he needed specifications of a helicopter for a reporter while he was deployed in the field, he could download the information from the Web by using a BlackBerry.

Within two days of getting his BlackBerry, Keefe said he stopped carrying his cell phone because the PDA had everything he needed in one portable piece of equipment.

Right now, the devices can be used to send and receive only nonclassified e-mails and information, said Larry R. Voss, from Booz Allen Hamilton, a consulting firm hired by Marine Corps Forces Europe to help with technology issues.

To transmit and receive data, such as e-mails, the BlackBerry sends a signal to Marine Corps Forces Europe headquarters, where it&#8217;s routed through military computers and a firewall, and then to its recipient, Voss explained.

The information is transmitted in an encrypted format, but the encryption is not secure enough for the U.S. military to use the BlackBerry for classified information, he said.

Voss said he expects technology will be available in five to eight years that would make the BlackBerry usable for classified information. Although the BlackBerry has tri-band cellular phone service, which means it can be used anywhere in the world to send and receive calls, its Internet and e-mail capabilities are limited because not every country &#8212; such as Africa and Iraq &#8212; has built the networks to handle those functions, Voss said.

Those countries should have that technology soon, he said.

The BlackBerry is an example of the trend toward a mobile, computerized environment, Nierle said, where front-line troops will have immediate access to information.