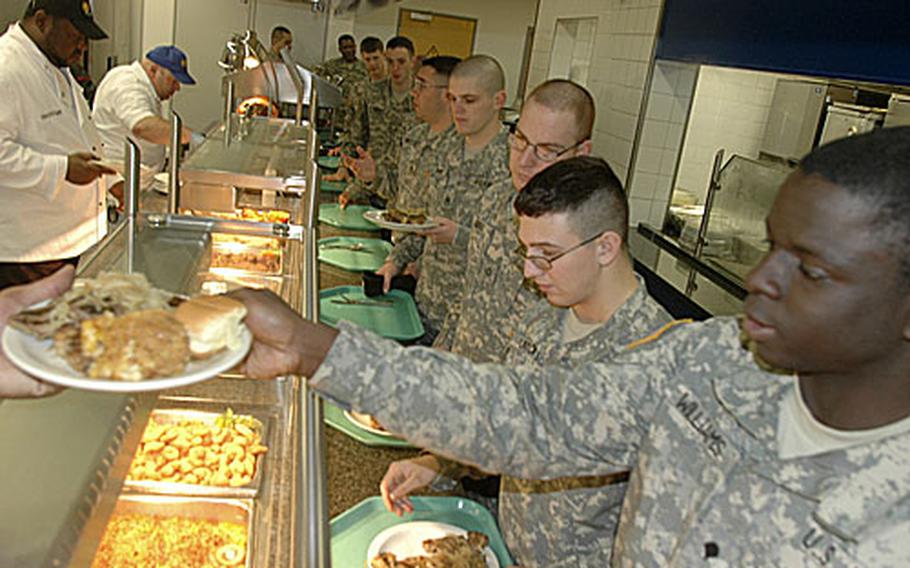 Spc. Doinell Williams, right, of the 52nd Signal Battalion, and other soldiers file through the lunch line Friday shortly after the reopneing of the Black Stallion Inn, the dining facility at Patch Barracks in Stuttgart, Germany. (Charlie Coon / S&S)

STUTTGART, Germany &#8212; The Black Stallion Inn was more like an old gray mare.

The dining facility at Patch Barracks in Stuttgart opened in 1978, and in 28-plus years it had served a lot of soldiers. It showed.

So diners were smiling Friday when the Black Stallion reopened after being closed for nearly nine months &#8212; two months longer than planned &#8212; for renovations. If the way to a soldier&#8217;s heart is through his stomach, then more than 400 troops and civilians who filed through for lunch on Friday were feeling the love.

Chow had been served since May 6 at the Patch Community Club, a small hike for diners who work at the 52nd Signal&#8217;s building, U.S. European Command and other tenants at Patch Barracks.

The renovated Black Stallion, which serves breakfast for $2 and lunch for $3.65, increased its seating capacity from 101 diners to 166. There is also a patio for when the weather turns nice.

There are now three flat-screen TVs that show sports, news and command information.

Big windows let in a lot of light, in contrast to the old, darker interior, and new tables and chairs. And there will be air conditioning for later in the year.

The project cost about $992,000, according to Brian Temple, an Army Corps of Engineers spokesman in Wiesbaden.

And as happens, when old buildings are ripped apart, sometimes surprises are found.

One of the kitchen staff was dismayed that while seating capacity was increased, the kitchen wasn&#8217;t.

&#8220;Typical Army snafu,&#8221; said Steve Brandt, an assistant manager. &#8220;They increased the seating capacity but didn&#8217;t increase the production capacity. They did absolutely nothing in the kitchen,&#8221; except install a new exhaust system.