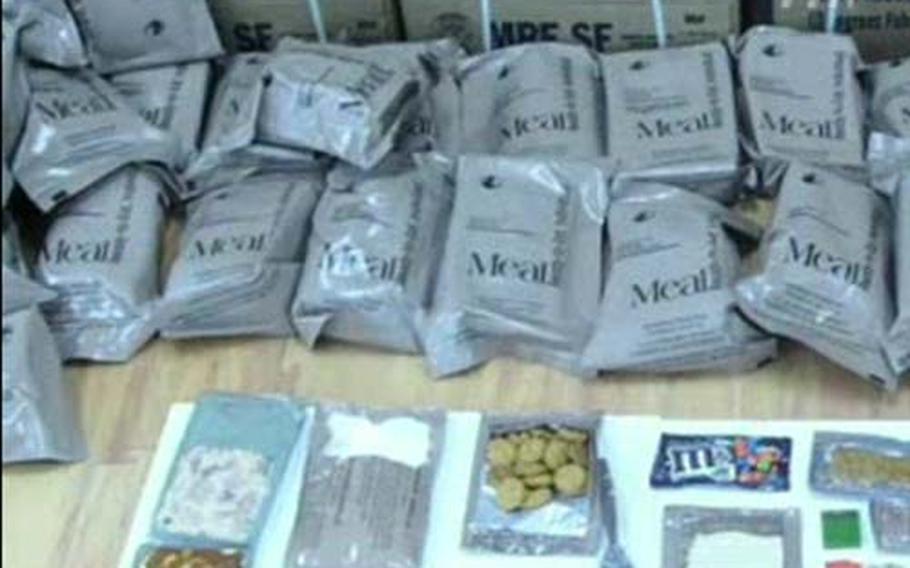 SEOUL &#8212; U.S. troops and South Korean soldiers helped supply a black market ring that illegally sold 20,000 Meals, Ready to Eat across South Korea in the past three years, according to the Gangnam police department.

Police on Wednesday charged 51 South Koreans for illegally selling imported food and violating the country&#8217;s Food Safety Act, a department spokesman said. No Americans were arrested, and the spokesman said it would be impossible to track them down.

According to the spokesman, who spoke on the customary condition of anonymity, the department began tracking the ring after getting a tip in mid-April.

Since then, police have confiscated 50 boxes of MREs that were for sale in traditional outdoor markets across the country, including Seoul&#8217;s Namdaemun, Dongdaemun, Sincheon and Cheonggyecheon markets, and in the cities of Uijeongbu, Dongducheon, Incheon and Bucheon. Police believe MREs &#8212; each packaged in a plastic casing that says "US Government Property Commercial Resale is Unlawful" &#8212; are being sold in other cities across the country as well.

"Some people said they like the MREs because they taste really good," the spokesman said.

USFK officials said Thursday they were unaware of an MRE smuggling ring.

The police spokesman said the sellers usually got the MREs from U.S. troops, their wives or South Korean soldiers assigned to work with the U.S. military called KATUSAs, or Korean Augmentees to the U.S. Army.

Women who sell food to U.S. troops during exercises also picked up MREs left behind after exercises, and sold them to black marketers, he said.

He said the MREs were popular among military buffs, South Koreans who fought in the Vietnam War, mountain climbers and fishermen.

About 20 percent of the MREs had passed their expiration date. Although police haven&#8217;t received complaints about people getting sick from eating them, the spokesman said they were worried that some consumers could get food poisoning from them.

When Gangnam police asked U.S. military police and U.S. Forces Korea officials to collect the confiscated MREs, they declined, saying they didn&#8217;t care what happened to the meals, the spokesman said.

Police said they will ask South Korean prosecutors what they should do with the MREs, but will likely burn them.

USFK spokesman Dave Palmer said troops aren&#8217;t supposed to sell MREs after receiving them. He said the cost of inspecting the confiscated MREs for freshness and safety probably outweighs the benefits of taking them back.