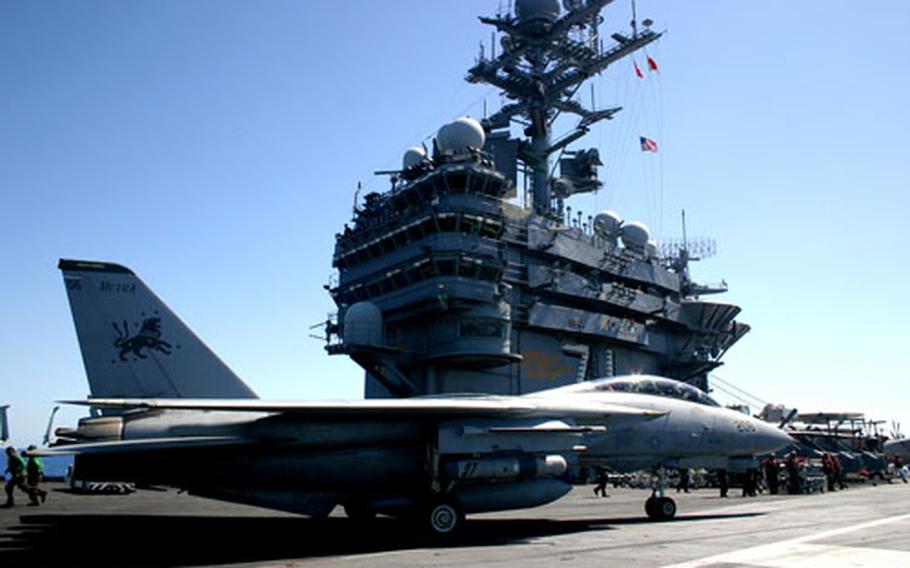 An F-14 Tomcat taxis by “the island” of the USS Theodore Roosevelt on Saturday after landing moments earlier. The Tomcat will retire for good after Carrier Strike Group 2, led by the Roosevelt, returns next spring after a roughly six-month deployment to the Persian Gulf. (Sandra Jontz / S&S)

An F-14 Tomcat taxis by “the island” of the USS Theodore Roosevelt on Saturday after landing moments earlier. The Tomcat will retire for good after Carrier Strike Group 2, led by the Roosevelt, returns next spring after a roughly six-month deployment to the Persian Gulf. (Sandra Jontz / S&S) 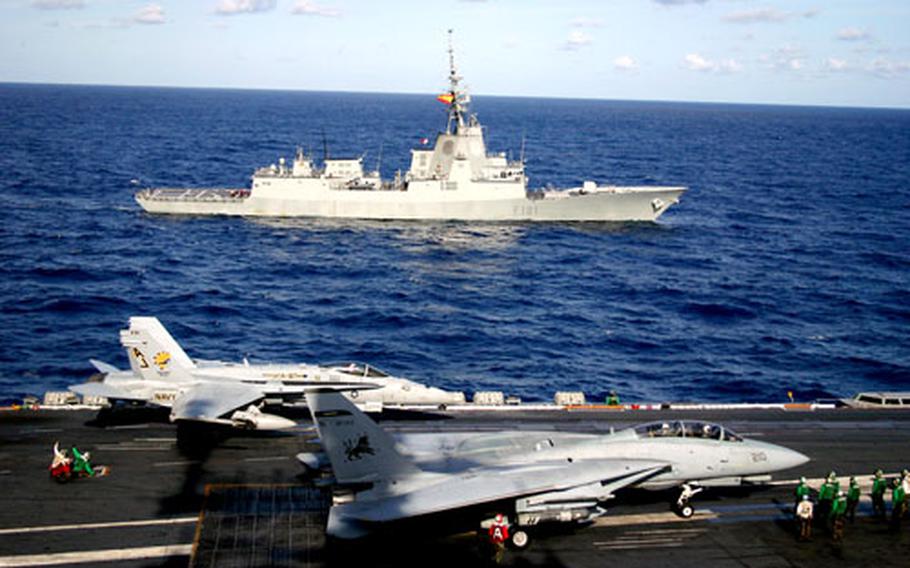 An F-14 Tomcat, foreground, and an F/A-18 Hornet prepare to launch from the deck of the aircraft carrier USS Theodore Roosevelt on Sunday. In the background is the Spanish frigate Alvaro de Bazan. (Sandra Jontz / S&S)

ABOARD THE USS THEODORE ROOSEVELT &#8212; The mainstay of naval aviation might, the F-14 Tomcat, is retiring for good.

The Navy&#8217;s last two active Tomcat squadrons, the &#8220;Tomcatters&#8221; of VF-31 and &#8220;Blacklions&#8221; of VF-213, both based out of Oceana Naval Air Station, Va., are on their final deployment aboard USS Theodore Roosevelt aircraft carrier as the strike group sails to the Persian Gulf to relieve the USS Nimitz.

&#8220;As a lifelong Tomcat pilot, it&#8217;s bittersweet to see those wonderful airplanes go away,&#8221; Rear Adm. James Winnefeld Jr., commander of Carrier Strike Group 2, said Sunday while aboard the Roosevelt as it sailed off the coast of Rota, Spain.

&#8220;We know we have an excellent aircraft coming along to take its place. The F/A-18 [Super Hornets] are extraordinary aircraft, less expensive to operate and have a lot more of reliability.&#8221;

For decades, thanks in no small part to Hollywood, the Tomcat has been emblematic of U.S. naval aviation.

While the Super Hornet is smaller and yes, even slower, both aircraft can perform the job the military looks to accomplish in combat, said Brown, with VF-31.

Pilots will need about four months&#8217; training to make the switch, officials said.

The Tomcat squadrons, with about 30 pilots and 300 maintenance crewmembers, described being among the last as an honor. In spite of back-to-back deployments over the past three years, more pilots volunteered to be part of this six-month deployment than the wing had available spots, Winnefeld said.

It&#8217;s not about shorter hours for mechanics, Petty Officer 3rd Class Jarell Thomas and Airman Mario Guzman said. After all, they&#8217;re on an aircraft carrier &#8212; what else are they going to do, they joked.