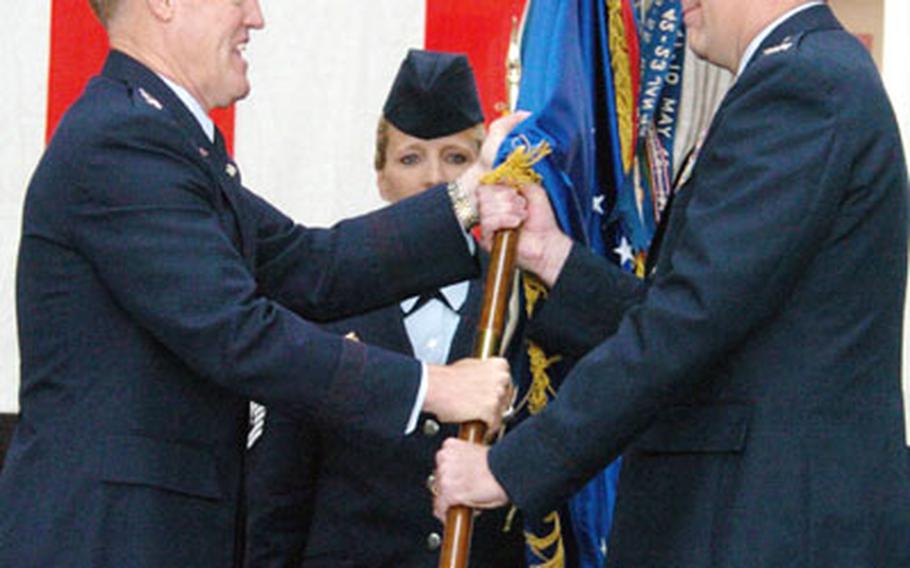 With the United States Air Force Band of the Pacific-Asia pumping out music, an honor guard presenting the colors and two giant U.S. and Japanese flags hanging behind the stage, Goodwin supplanted Schissler for the second time in two years. He had served as the 463rd Airlift Group commander at Little Rock Air Force Base, Ark., a job Schissler held before arriving at Yokota in July 2003.

&#8220;This is the second time I&#8217;ve followed you into an assignment. Considering your next duty station is the Pentagon, I&#8217;d prefer not to make it three in a row,&#8221; Goodwin quipped during the ceremony.

Schissler is returning to the Pentagon for a fifth tour. This time, he&#8217;ll become the assistant deputy director of international negotiations for the Joint Chiefs of Staff plans and programs directorate, multilateral affairs division.

The 374th Airlift Wing is comprised of 17 squadrons with more than 2,000 military members and civilians, as well as 1,000 Japanese employees. The base has a population of about 11,500 people.

&#8220;It is a special privilege to be joining an organization with such a rich legacy,&#8221; said Goodwin, who is accompanied by his wife, Ann, and daughters Lauren and Ashley.

&#8220;We are equally pleased to become part of such a wonderful community. It&#8217;s clear the bonds between Yokota Air Base and our surrounding Japanese communities are strong.&#8221;

Wright praised Schissler&#8217;s leadership over the past two years, adding that the wing captured 177 higher headquarters-level awards during his tenure.

Schissler said his departure from Yokota would be felt more on a personal level.